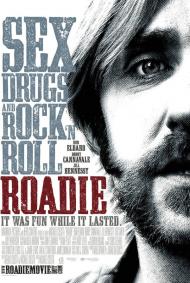 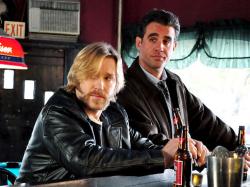 Roadie is a well-written and acted little drama that will certainly have more resonance for anyone in mid-life. Ron Eldard stars as Jimmy Testagross, a forty-something loser on the fast-track to nowhere. After 26 years as a roadie for the rock group Blue Oyster Cult, he finds himself unceremoniously fired somewhere in Michigan.

He makes his way home to his old neighborhood in Queens for the first time since his father’s death. Jimmy finds himself confronting issues with his mother as well as reconnecting with an old high school flame and her husband; the same guy that used to bully Jimmy back in the day.

Although they have all gotten 20 years older, not much else has changed. The old adage that everyone grows older but not everyone grows up has rarely been more clearly evoked. The dynamics of their relationships are pretty much where they left off as young adults.

Jimmy still carries a torch for Nikki, and her husband Randy is still a bully. He still insists on calling Jimmy by his high school nick-name of testicles (a play on Jimmy's last name). These three middle-aged adults rent a motel room and proceed to party like they are still in high school. Not surprisingly, the party goes wrong quickly and the night ends ugly for Jimmy.

The action takes place over the course of two days. Jimmy’s return to the old neighborhood is realistically depicted. His old car is still rusting in his mother’s driveway and she has kept his bedroom unchanged, as a virtual shrine to her absent son.

Lois Smith and Ron Eldard have good chemistry together as the aging mother and child. They are both at a crossroads of sorts. She has begun to show signs of senility and he has (perhaps) finally awoken, bleary-eyed, to a sober morning after a 25 year party.

The scenes in Jimmy’s bedroom had the most resonance for me. At one point he puts an old vinyl record on the turntable, lies down on his child-sized bed, and pictures his teenaged self pretending to play the guitar using a tennis racquet. He later gets caught by his mother sitting on his bed in a near kiss with the married Nikki. It’s an awkward moment that seems out of place given the ages of everyone involved.

Nikki is clearly unfulfilled in her marriage and her aspiring singing career. Randy dresses like a grown-up but is just as emotionally stunted as his wife and Jimmy are. One thing this movie proves unequivocally is just how pathetic the sight of middle-aged adults partying like teenagers is.

Roadie is a minor little movie with a good cast. The story is rather slight but one that anyone over 40 can relate to. Like Young Adult, Roadie paints a vivid portrait of middle-aged adolescence, and in both cases it isn’t a pretty sight. 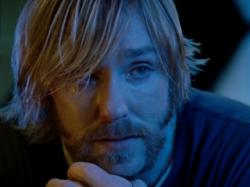 Despite Thomas Wolfe's warning, going home again has been a familiar theme at the movies recently with this movie and Young Adult being released so close to each other. Where Young Adult was an exaggerated black comedy, this smaller film hits much closer to sober reality. Well, maybe not sober.

Ron Eldard, who plays the lead here, is a character actor who has been performing minor roles for the past two decades. You may recognize him as Elle Fanning's father from Super 8. He does a terrific job as Jimmy in this film. His performance, and the script, make Jimmy seem very real, like someone you may have met. It's obvious that he doesn't always make the right decisions and although the details aren't given, you have to assume that his predicament is at least partly his own fault. Despite all that though, I still felt a great deal of empathy for his character. If enough people see this film, I wouldn't be surprised to see Eldard's star start to rise. He's that good in the part.

Patrick, I disagree that the scene of the near kiss seems out of place. There's tension between Jimmy and Nikki because he still obviously has feelings for her, while she's a married woman. Jimmy's mother and her approaching dementia, which is kept deliberately vague, makes it unclear if she's confused about the situation. Plus, there's a feeling of old routines being slipped back into, despite 25 years having passed. You know that scenes like this must have been played out between mother and son in the past. I'd say there's enough awkwardness to go around despite how old everyone is.

I do agree with you Patrick, about everything else. This is a well-written and acted drama. It's a character study of a man who is forced to come home again to where he was a child and maybe finally at least start to grow up.