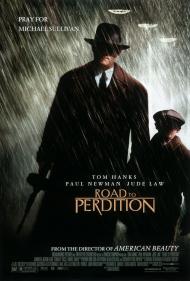 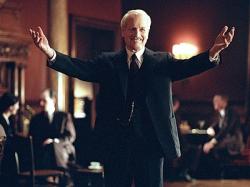 Paul Newman in The Road to Perdition.

I must admit that with the exception of David Lynch movies I almost never go to the cinema expecting to dislike a film. On top of this I have always been a huge fan of Paul Newman, so I definitely wanted very badly to like Road To Perdition. I wasn't disappointed.

This movie is absolutely beautiful to look at in its vivid recreation of depression era Chicago as well as surrounding rural areas of Illinois. The colors are almost all muted blues and grays and the cinematography is highly stylized. The look, sound and texture of the movie are nearly perfect.

Adapted from a graphic novel, Road To Perdition tells of the pivotal events in the life of a boy and his father over a six-week period in the winter and spring of 1931. Michael Sullivan Jr., curious about what his father does for a living, hides in the backseat of the family car in order to accompany his father on a job one fateful evening. He winds up witnessing a murder and gets caught spying on his father. This sets off a chain of violent events that will forever alter his young life.

I think when a movie is as technically well crafted as this one is the enjoyment of it boils down to whether or not the viewer can make an emotional attachment to the characters and their story. And though the grimness and inherent violence are a bit much and the eventual outcome is fairly predictable this did not keep me from getting completely caught up in the melodrama. Watching Hanks and Newman square off sent chills down my spine and I found the father-son motif to be quite moving.

Much like The Godfather series this movie raises the question of whether or not it is possible to be a cold-blooded gangster and still be a good father. An intriguing question, I think, and one with no absolute answer.

To become a classic a movie must contain images that stay with you long after the credits roll. Road To Perdition is such a movie. 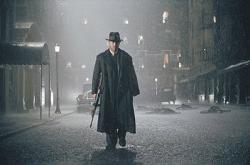 Tom Hanks in The Road to Perdition.

It may have been because of my high expectations for this movie that I didn't enjoy it as much as Patrick.  Not that it isn't a good movie.  It is that.  It just wasn't as great or as classic as I anticipated it would be.  Despite being visually extraordinary, the story structure is weak at times and certain character's actions are questionable.  And while there is no doubt that Paul Newman and Tom Hanks are great actors, these aren't even close to the best roles of their careers.

Sam Mendes creates a look for this movie that manages to make a movie filmed in color carry the look and feel of a black and white movie.  I don't just mean that things are grey and drab, although at times they are.  I'm no cinematographer and so lack the technical terms to convey exactly what I mean, but he captures a time period and a feel with his visuals that suggests a stylized 1930's Chicago as seen from the 21st century.  This look and feel as epitomized in a gun battle that takes place near the end of the movie is the best thing this movie has going for it.

Two particular things bothered me about the plot of this movie.  Without trying to give any thing  away, the hit man Michael Sullivan (Tom Hanks) loses someone very close to him near the beginning of the movie.  This loss is the motivation for the rest of the movie.  Only, except for the initial reaction of sorrow, it doesn't seem to affect him very much.  Just a few days later he and his son are laughing and joking around while teaching the son to drive.  The second thing that bothers me about this movie is that it could have been thirty minutes long.  The middle 3/4's of the movie is just filler.  The aforementioned person close to Sullivan is killed near the beginning of the movie, and the last ten minutes is the resolution of his revenge attempt.  The middle bit which is supposed to be about helping him gain revenge doesn't really affect how it ends up, he could just as easily have done right away, what he ends ups doing one and half hours of movie time later.  The middle part is entertaining, but it's not necessary.

Patrick said two things in his review which stand out to me, firstly that "...the enjoyment of it boils down to whether or not the viewer can make an emotional attachment to the characters and their story."  Well, I enjoyed their story but felt no attachment to the characters.  He also said, "To become a classic a movie must contain images that stay with you long after the credits roll."  I agree with this, but while Road to Perdition did contains some great visuals and images that I will remember, I can't say that I consider this movie to be a classic. 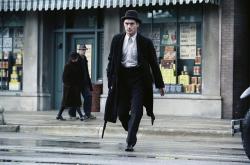 Jude Law in The Road to Perdition.

Patrick wrote: "Much like The Godfather series this movie (Road To Perdition) raises the question of whether or not it is possible to be a cold-blooded gangster and still be a good father. An intriguing question, I think, and one with no absolute answer." Both movies give clear answers to your question. You, Patrick, are either too scared to judge, or you just were not paying attention. "..one with no absolute answer." What is with your politically correct conclusion?. Take a stand! This fence walking of yours is pathetic.

In Road To Perdition a hit man's wife and son are murdered because he chose to work for a known gangster. He has a job that is to bully, beat up and occasionally kill people. How in the hell could anyone not look at that situation and see that it was going to end badly. I think the old saying "reaping what you sow" applies here. His job came home to roost.

In conclusion, Patrick, both of these movies definitely answer the question, can you "be a cold-blooded gangster and still be a good father.?" The answer is a resounding NO! It is the great character flaw in both of these movies. It is especially ironic in The Godfather, where a man, through his crimes, builds a wealthy, exclusive life for his family only to have it all come undone by the very same type of criminal activity that built his empire to begin with.

I agree with both Patrick and Scott in that the look and emotional feel of this movie is perfect. It sets a tone early on with the intriguing shot of the boy riding his bicycle over the snow covered sand dunes and never lets up. However, other than the son, I never cared for any of the characters. Perhaps if the movie gave more reasons as to why the father chose a life of crime, I might have felt sorrier for him. As it is, this is simply a story of a criminal who gets his come uppance, and a son who pays the price for his fathers sins.