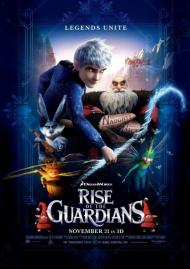 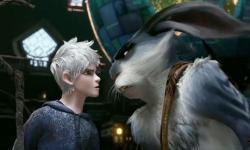 Jack and Bunny, trying to see things eye to eye in Rise of the Guardians

Rise of the Guardians is an action packed tale based on the book, "The Guardians of Childhood" by William Joyce.  It features four iconic childhood mythological characters who band together to defend the children of the world.  As Santa Claus explains, "It is our job to protect the children of the world. For as long as they believe in us, we will guard them with our lives."

The story begins with the introduction of Jack Frost, who is depicted as a free spirited teenager out to have some fun. He starts snowball fights and relishes in giving children snow days from school. His only dilemma being that children do not believe in him as they do Santa Claus, the Easter Bunny, the Tooth Fairy, the Sandman or even the Bogie man.

At the north pole, Santa's early alert system detects the rise of the Bogie man, known here as Pitch. Faster than you can say, "Avengers assemble",  Santa collects Tooth, Bunny and Sandy to answer Pitch's threat. Once together, the Man in the Moon informs them that a new guardian will be joining their ranks, enter Jack Frost. What follows is a story of superhero proportions.

A Russian accented Santa rides on his sleigh, wielding swords. Bunny runs like The Flash and employs a boomerang, which befits his Australian accent. Sandy controls dreams and wields powerful forces of sand. Jack has a staff that freezes anything it touches and creates ice in any manner he wishes. Like The Black Widow in the Avengers, the only female member, Tooth, is the weakest. Her only power being that she can fly.

Although filled with action scenes and battles suitable for a comic book, Rise of the Guardians has several messages to tell. Jack has a conversation with Santa where he must learn to find his, "center." Jack is not sure what his role in the world is. The real theme though, is faith. Pitch battles Sandy to take over children's dreams. If he can instill fear in children with nightmares, they will lose hope. As children begin to question the existence of the guardians, the less powerful they become. You could easily make religious parallels but the story steers clear of any and all direct mention of any actual religion.

Rise of the Guardians is a fast paced film that plays a bit loose with tradition. Santa is called "North" instead of St Nicholas or any of his other well known monikers. There is a joke that all of the toys at the north pole are actually made by Yetis and not elves. Just don't tell them that. Easter eggs have legs, which I found slightly disturbing. They walk themselves to their hiding spots. The teeth collected contain memories. Still, most of what we see is very familiar to us and the extra details just add another layer of interest. 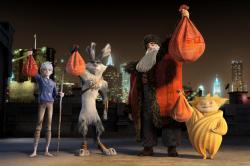 Chris Pine, Hugh Jackman and Alec Baldwin provide some of the voices in Rise of the Guardians.

The idea behind The Rise of the Guardians is so simple and yet so much fun. It combines several modern mythological beings and puts a superhero spin on them. There's plenty of action, but with a heart filled center that avoids becoming too sentimental.

Eric's right that the characters don't adhere to the more traditional aspects of their myths, but the story wouldn't work if they did. There's also no mention of Christianity, despite Christmas and Easter being religious holidays at their center. Some of the changes actually make sense, such as the teeth containing memories. It's the first valid reason I've heard as to why the Tooth Fairy collects them. Otherwise, the story of an invisible creature sneaking into children's rooms at night to collect their teeth just seems creepy.

The plot is fairly standard superhero fare. An evil villain threatens to take over the world and a group of heroes must assemble to defeat him. Jude Law provides a great evil voice, and the scenes of battling him provide the action. And it is beautifully animated action.

It's the interaction between the characters that is the real fun though. Jack and the Easter Bunny are at odds for most of the film and their banter provides some laughs. Likewise, the Tooth Fairy's obsession with teeth and her admiration for Jack's pearly whites is the subject of a few jokes.

Of the voice actors, it is Hugh Jackman and Alec Baldwin who are the real standouts. Jackman's Easter Bunny has a chip on his shoulder and a broad Australian accent. Baldwin plays Santa as a very over-the-top and bigger than life Russian, which suits the character perfectly.

There are several books in “The Guardians of Childhood” series and so there's plenty of room for sequels. They could introduce new characters or explore the origins of the ones already introduced. With the same team behind them that made this film, I'd happily go and see them.

Rise of the Guardians is an imaginative, fun-filled ride. It features lots of visually wondrous action for the kiddies, plenty of heart for the adults, and enough humor to go around for everybody. This version of Jack Frost is heroic and fun-loving and easy to identify with. Young boys in the audience will surely want to be him. His back-story flashback on thin ice borrows from a famous scene in the holiday perennial It's a Wonderful Life.

Alec Baldwin as a Russian Santa Claus and Hugh Jackman as an Australian Easter Bunny are both hilarious. The Sand Man is the silent member of the group but perhaps its most powerful. As Eric mentioned, the Tooth Fairy is the weakest member of the Guardians. She and her tiny tooth-fairies play the role of the traditional damsel(s) in distress. They seem downright anachronistic in the year of Merida and her mother Elinor in Brave or Jane Lynch's Marine Calhoun from Wreck-It Ralph.

These four are, respectively, the embodiment and protectors of childhood Wonder, Hope, Dreams, and Memories. Jack's journey is one of self-discovery. He must identify his special gift and the reason he was chosen to join the Guardians. His story grounds the movie and provides its biggest emotional arc without, as Scott wrote, becoming overly sentimental. Although to be honest the saccharine levels do rise fairly high in several scenes but as this movie is aimed at children I'll give it a pass.

Some of the humor is aimed well over the kids' heads though. Whenever Santa is surprised or amazed he loudly exclaims the name of a famous Russian composer. “Shostakovich!” or “Rimsky-Korsakov! That's a lot of eggs!” Foreign audiences will recognize a cameo by Ratoncito (little mouse) Perez or The Tooth Mouse. He's discovered beneath a pillow and identified as “one of us, European division”. A literary creation of Spanish author Luis Coloma in 1894, The Tooth Mouse visits children who've lost a tooth in Spain, Portugal, France, Italy and Latin America and leaves a present under their pillows.

My only real complaint is the run-of-the-mill central plot device of Pitch trying to take over the world and the fact that it runs a bit long. Those old Walt Disney cartoons ran about an hour to an hour and fifteen minutes, which is the perfect length for an animated feature. This one surpasses the ninety minute mark. Despite these few flaws I enjoyed Rise of the Guardians and predict it will go on to entertain generations of youngsters.