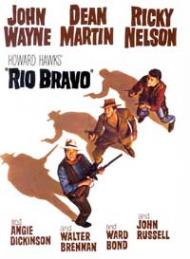 You could look at John Wayne’s acting ability from two different perspectives. From one angle he almost always played the same role. Only the color of his hat changed. On the other hand, he was so comfortable in front of the camera that he played every role how he wanted to. He was always bigger than his roles. The one thing to note about Rio Bravo is that, although this is clearly a John Wayne movie, the rest of the cast is worth mentioning.

In Rio Bravo, Wayne plays a sheriff of a town, run amuck by cowboys from a local ranch. The movie opens with the brother of the ranch owner getting arrested and put in jail. The rest of the movie plays out with ranch owner trying to get his brother out of jail, while Wayne and company wait for a Marshall to come and get the prisoner. The entire movie has an undercurrent of tension as the two sides scheme and shoot at each other.

Dickinson shows up as a women with a questionable past. She and Wayne immediately have eyes for each other. Dickinson is fine enough in the role, but she was 28 when this movie was released and Wayne was 52. Her character has been around the block a few times and she is ready to settle down. Dickinson does what she can with the role but it really should have been played by an older woman, who looks a little less innocent.

Speaking of innocent looking, Ricky Nelson could not have had a babier face if he was 2 years old. The teen idol looks as pure as a falling snowflake, yet is playing a gunslinger. He looks about as capable of killing a man as he is having a glass of hard liquor. No doubt, to satisfy his fans, Nelson played a guitar and sang a duet with Dean Martin in one scene.

The most interesting acting done here is by Dean Martin. He plays a drunk, which was a running joke for Martin, but in Rio Bravo he plays it straight. The movie is as much about his character’s redemption from alcoholism, as it is about anything else. Martin was from Ohio and of Italian descent. He was known for his comedies with Jerry Lewis and his singing. He was not the stereotypical Hollywood cowboy. However, he pulls it off very well.

Walter Brennan plays the comic relief Stumpy, an old coot deputy with a bum leg. At one point Wayne warns the prisoner, "If any trouble starts around this jail, before anybody can get to you you're gonna get accidentally shot." Stumpy then adds, "I can practical' guarantee that!" Old Wayne friend, Ward Bond rounds out the cast.

Rio Bravo was one of the most star filled westerns of it’s day. Whether you think of Wayne as a great actor or not, you have to give it to him, he could work well with anyone. He alone holds this, mostly miscast, film together and makes everyone around him look better than they should.

John Wayne and Angie Dickinson get to know each other.

I wouldn’t call it miscast at all. Angie Dickinson is believable as the widow of a crooked gambler. She figured out how to survive on her own in a man’s world. I don’t think she was too young either. A 28 year old woman in the old west was practically middle-aged. Her relationship with Wayne is well-written, and considering that the love interest angle was always the weakest link in any Wayne vehicle, this one seems particularly compelling. And yes Ricky Nelson had a baby face but so did Billy the Kid. I think he pulls it off. Granted he doesn’t have that many lines but he certainly doesn’t embarrass himself.

Martin is good, although the idea of him playing an alcoholic in a dramatic fashion is a bit chuckle inducing. Ward Bond does his usual stalwart supporting role with no fanfare. Walter Brennan steals all his scenes with his gleeful cackle and that maniacal gleam in his eye. Along with Brennan, Pedro Gonzalez provides comic relief as Carlos the hotel proprietor. Wayne was at the beginning of his peak years of popularity. He was in the process of morphing from movie star to international icon. He is the center around which the others orbit.

The action, humor, drama and romance are interwoven nicely. Of the more than 140 Hollywood movies that John Wayne starred in (an achievement that will never be equaled) he made perhaps half-a-dozen undisputed classics. He also made dozens of solidly entertaining movies that hold up well all these years later. Count Rio Bravo among these. He knew what audiences wanted and that’s why he was among the top ten box-office stars every single year from 1949 until 1974. 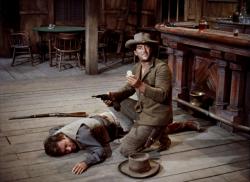 I agree with you Patrick, I don't think this movie is miscast. I think the cast is what makes the movie. Wayne is Wayne of course. Ricky Nelson isn't the greatest actor, but he doesn't embarrass himself, as you mentioned Patrick. I liked Angie Dickinson in her part. Sure, there's an age difference, but she's old enough that it didn't bother me. Walter Brennan is a hoot as the old coot. Like you Eric, I think it's Martin who has the most interesting part. His is the only character with a real arc and Martin does a good job of playing the washed up gun fighter looking for redemption.

The biggest problem the movie has is that it runs about an hour too long. At 2 hours and 20 minutes, it takes a long time to really get going. The first hour, after the well done silent opening sequence, consists of Wayne doing a lot of running back and forth between the jail and the hotel. There's plenty of room for trimming there.

My other complaint is that Burdette is a mostly absent villain. Wayne and his group of good guys are all clearly defined, but Burdette has only one scene. He should have been shown more as a threatening bad guy. Apart from Ward Bond getting shot, nearly everything goes Wayne's way and I never felt that he and his were ever in real danger.

Interestingly, this movie was made by Hawks and Wayne as a response to High Noon, which they both hated and felt was unamerican. Hawks explained, "I made Rio Bravo because I didn't like High Noon. Neither did Duke. I didn't think a good town marshal was going to run around town like a chicken with his head cut off asking everyone to help. And who saves him? His Quaker wife. That isn't my idea of a good Western." In High Noon, Gary Cooper asks the townsfolk for help. In Rio Bravo, when offered help, Wayne replies, "Some well-meaning amateurs, most of 'em worried about their wives and kids. Burdette has 30 or 40 men, all professionals. Only thing they're worried about is earning their pay. No, Pat. I'd just be giving them more targets to shoot at. A lot of people'd get hurt. Joe Burdette isn't worth it. He isn't worth one of them that'd get killed."

This is Wayne doing what Wayne did best. Playing a man's man in an entertaining Western. It's not his greatest film and it does run long, but it's still fairly solid entertainment anyway. 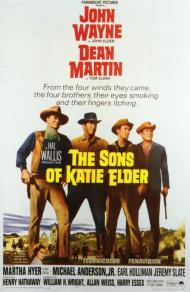