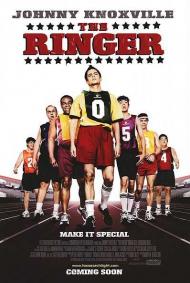 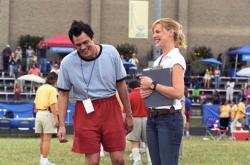 Johnny Knoxville and Katherine Heigl in The Ringer.

In The Ringer, Knoxville plays a man pretending to be mentally challenged so he can enter and win the Special Olympics. In the process he falls in love with a "normal" girl who works with the special contestants. Although this all seems politically incorrect and original it is hardly either. 50 years earlier, Jerry Lewis pretended to be a little kid in You're Never Too Young (1955). Like Knoxville, Lewis walked around awkwardly holding himself and trying to talk differently. Although Lewis is trying to act like a child and Knoxville a "special" athlete, they end up acting quite similar.

Knoxville needs to raise money for his illegal alien employee's medical bills. Apparently he does not understand our current medical system of billing, where illegal aliens stiff our hospitals all of the time and the rest of our insurance companies get over charged to make up the difference. Knoxville's Uncle needs money to pay off a loan shark. Together, they come up with the scheme of having Knoxville enter and win while his uncle bets on him.

A group of athletes discover the truth and decide to train him so he can beat the arrogant, favored athlete and pay off his medical bills. The movie bends over backwards to show "special" people as smart and playful who want love and respect. They come across more like Jerry Lewis acting like a 12 year old.

The movie goes for some laughs by having the athletes spout ridiculous lines like, "I can count to potato." "Oh my stars of the love of Liza. You scratched my C-D!" and "Oh my-lanta!" Only the loan shark is allowed a crass line. "Incredible; that guy is the Deion Sanders of retards." The funniest line comes when they get caught sneaking back to their dorm and one says that they were out getting ice cream. The rest are clueless and one asks out loud, "When the fuck did we get ice cream?"

The Ringer appealed to my sons, but then so did Jerry Lewis movies when I was their age. 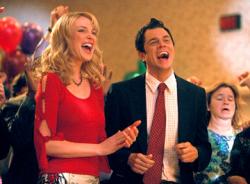 Katherine Heigl and Johnny Knoxville in The Ringer.

It's funny what you'll watch when you're home sick with a cold and the remote control is across the room, as was the case with me and The Ringer. Turns out that was the only thing funny about the whole experience.

At the very least I expected this movie to be politically incorrect with some funny jokes that I would be embarrassed to admit that I laughed at. I mean this is a movie starring Johnny Knoxville and produced by the Farrelly Brothers, after all. Instead it tries to be sweet and heartwarming. It should have had the balls to go for incorrectness then it might at least have been memorable. Instead it's just a very lightweight, generic after-school comedy.

I disagree somewhat with Eric's comparison to Jerry Lewis' movies. Compared to The Ringer, Lewis' movies had edge.