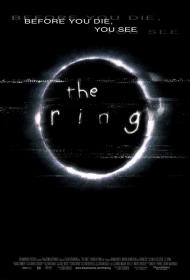 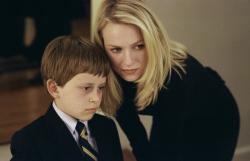 David Dorfman and Naomi Watts in The Ring.

Sometimes I read other reviews of a movie before I write my own review. I like to see what other people thought about the movie and sometimes it helps me form my own review. For instance, in the case of The Ring, I discovered that the consensus was that it was filled with suspenseful moments, but that it didn't make much sense. I disagree with half of that statement. It is filled with suspense and contains the appropriate number of 'jump' moments, but I feel that it does make sense within the world created in the movie. After all, this is a movie about the supernatural. It doesn't have to follow the normal rules of our mundane physical world.

The movie begins with the telling of an urban legend. The legend goes that there is a videotape in existence filled with bizarre images. After watching the tape, your phone will ring and a voice will say, 'Seven days.' And naturally, seven days later, you will die. The mysterious death of her niece makes newspaper reporter Rachel Kellar (Naomi Watts) aware of the legend of the videotape. She, along with her ex-boyfriend and her supernaturally tuned-in young son, begin to investigate the legend. And after viewing the tape, it becomes a race against the clock to uncover the mystery before she dies.

As for not making sense, the movie does make sense once you accept that supernatural things are happening in this movie. Things that go bump in the night have their own logic. I suppose the only way this movie wouldn't make sense is that if at the end of it, you discovered that it was a Scooby Doo thing, and old man Withers was uncovered under the mask. But that doesn't happen, the causes of it all, without giving anything away, are supernatural.

One of the best things about this movie is that rather than going for blood and gore, it sets an atmosphere of creepiness that doesn't let up throughout its entire length. I jumped in my seat many times. It also develops a back story about the characters without ever letting it interfere with the main plot. In mood, it is close to The Sixth Sense. It even includes a serious young male actor, and has a twist ending that, while not equaling the Sixth Sense's ending, does contain a sting.

Creepy and interesting, The Ring is a solid horror movie, particularly if you are a fan of the genre. Oh, and in case you were wondering, the ring referred to in the title is in reference to an image seen on the videotape. It is also the last image you will see seven days later right before you die. 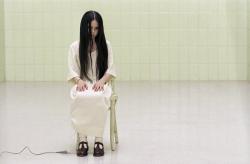 Daveigh Chase in The Ring.

The Ring is a horror movie without being a gore movie. Its weapon is suspense and mood. In this movie atmosphere is more important than amputation. As Scott wrote, this movie is creepy.

The whole film seems to be about entropy. The cabin in the woods appears uncared for. It has moss growing on the roof. The movie is shot in dull, dreary colors. There is very little life in the look of the movie. The only bright color in this movie is a repetitive scene showing bright red leaves with water dripping off them. Of course red leaves represent the end of a season as the leaf dies.

The characters are different. The little boy calls his mother by her first name. The ex-boyfriend tells his son to his face that he doesn't want to be his dad. Okay he is more subtle than that, but it is the message he sends. The couple show no signs of reconciling through out the movie. Love is definitely not a theme here.

The video tape threw me off. The scenes in the video seem as if they took place years before they actually did. The family and images on the tape seem more turn of the century than just 20 years ago.

The main characters spend the bulk of the movie discovering a lot about this odd family and the spirit that is doing the killing. Yet, the movie never explains why she uses the video tape as a means of travel, so to speak. Nor does it explain why the spirit kills at random whomever watches the tape, yet lets her father live. Her father, it is discovered, was responsible for much of her torment in life. So why she did not kill him off long ago is beyond me.

I watched this movie at night, by myself. That is the perfect way to watch a horror movie. It did not actually scare me. It did have some absolutely creepy moments though. I just knew there would be a body in there when she fell in the well. The suspense of how she would discover it was good. This movie created some images that will be in my head for a while. The girl crawling out of the well and walking toward the screen is subtle, yet hideously disturbing. 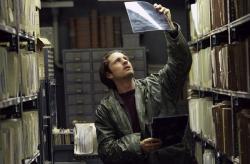 Martin Henderson in The Ring.

It seems we have a consensus about this movie. The Ring is a solid three star horror film. Although during the opening scenes I was completely unimpressed with the amateurish acting and awkward dialogue. Once Naomi Watts views the mysterious tape alone in the decaying cabin the movie elevates to a higher plane.

My brothers both mentioned the creepy factor and the good use of interesting images and startling moments. What neither of them mentioned, but I thought to be an important aspect of the movie, is the way it takes you on a journey. More than most horror movies it is also a mystery story. Who is Anna Morgan? What is her connection with horses and why the recurring image of seeping water? Where is the real lighthouse that is discovered on the tape? What is the significance of the tree on the hill? Did the Morgan's have a daughter, and if so what role did she play in the making of the videotape? In most horror movies there are only one or two 'keys' to the plot, whereas here there are many different details that create a web of intrigue. The story unfolds in small increments. Even after the satisfying conclusion many questions remain.

Part urban legend, part old-fashioned ghost story, The Ring presents a well-constructed story, filled with images that stay with you long after the credits have rolled.