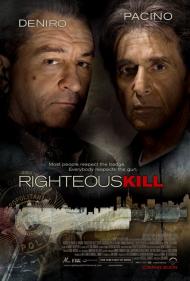 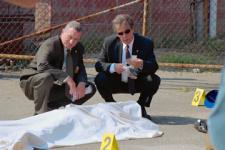 This is De Niro and Pacino people! Is this really the best you could come up with?

So somebody finally got De Niro and Pacino to co-star in a movie together and this is the best they could come up with? Two of the greatest actors of their generation, they'd both starred in The Godfather Part II, but didn't appear in any scenes together. They both starred in Heat, but only shared a minimal amount of screen time. Here, while De Niro is the star, they appear in almost every scene together and yet what should have been the equivalent of a Home Run Derby between Babe Ruth and Mickey Mantle, is more like a promotional appearance by Babe Ruth and Mickey Mantle. Both stars are there, but they never get a chance to really exercise their talent.

Turk (De Niro) and Rooster (Pacino) are New York Police Detectives well past their prime, even to the point of ridiculousness. Pacino is 68 and De Niro is 65 and they both look their age. It's my guess this movie was written for two younger actors and a few lines were adapted to accommodate their age when these two were cast. Carla Gugino plays Turk's love interest and she's nearly 30 years his junior. Their sex scenes together just seem pervy.

The case the partners are involved in is the murders of several criminals by a vigilante. All of his victims are real slimeballs and the detectives don't know whether to catch him or to give him a medal. Now the twist in the movie is that it opens with one of the main characters confessing to the crimes. However, for the rest of the movie, which flashes back to show the crimes, the perpetrator is hidden from view. If the confessor from the beginning was really the criminal, why would they bother to hide them for the rest of the movie? Obviously because the confessor isn't the guilty party and unfortunately, the true guilty party is very, very obvious.

I kept waiting for something truly dramatic to happen in this movie. I wanted scenery-chewing acting. I wanted these two heavyweights to go 10 rounds with each other. I'm still waiting. This movie really could have starred any two halfway decent actors and most likely would have been better with two actors in the 40s. Instead of heavy drama, this is just a formulaic cop drama with a lame mystery and motivations that don't make much sense. The very fact that it stars De Niro and Pacino overshadows all aspects of it. Because of them you expect it to be more and it just isn't. 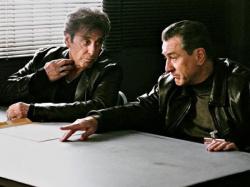 I understand your disappointment Scott. These two Hollywood legends have developed such reputations that we expect nothing but the best from them. I was not disappointed by either actor’s performance but neither gets a scene to really impress in. There are no “Attica!” or “You talking to me?” moments. This was not the best choice of film for them to star in.

Like Scott wrote, they both seem far too old for their parts. Let me put it this way. In This Boy’s Life (1993), Carla Gugino played De Niro’s daughter. Here she plays his lover. De Niro is constantly shown exercising, as if that is to somehow make him look more virile. It does not work. It still looks like incest.

The mystery of the killer’s identity is pathetic. As Scott noted, if the confessor from the beginning was really the criminal, they would not hide the killer when we are shown the killings. With that thought, the number of suspects instantly falls to two.