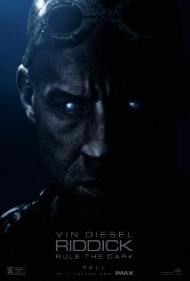 My biggest complaint about The Chronicles of Riddick, the previous film in this franchise, was that it went too big when compared to its predecessor, Pitch Black. That is definitely not a problem with Riddick, the third installment in the series. This one is very much back to basics as the plot is reminscent of the original.

Once again Riddick finds himself trapped on an uninhabitated planet with a small group of people being hunted by alien monsters. This time those with Riddick are two seperate groups of bounty hunters looking to take Riddick into custody. There's a brief flashback that shows how Riddick ended up stranded on this planet. It's a quick way of dispensing with all the political nonsense that took place in the second film. It also allows for some brief female nudity and a cameo by Karl Urban.

Diesel plays Riddick not so much bad or good, but more like a wild animal. He's not concerned with morality, just survival. And like a wild animal he's at his most dangerous when he's cornered. His only motive is his own survival. It's a part that suits Diesel down to the ground. It's one that doesn't require a great deal of acting skill, just a gravelly voice, a badass attitude and a lots of muscle.  Diesel has an odd sort of action star charisma, but whatever he has, he knows how to use it.

There's plenty of action and it rarely lets up for very long. Riddick battles monsters and the bounty hunters like a one man wrecking crew. Some of the violence is quite bloody and gross, particularly one moment with a flying machete. It's the blood, violence, the aforementioned nudity and some side-boobage from co-star Katee Sackhoff that gives the movie its hard edge and R-rating.

There's nothing original or innovative about Riddick. The plot was an old one when it was used 13 years ago in Pitch Black. It's just giving the audiences what they've come to expect. It's a B-Movie of the kind 40 years ago you'd likely have seen in a drive-in. That doesn't mean it's not entertaining, because it is in its own raw, animalistic manner. It's far from perfect, but if you were a fan of the first two movies you'll likely enjoy this one as well. 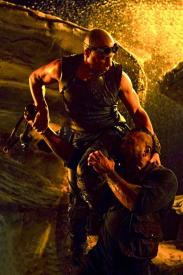 Sadly, I think Scott over praised Riddick. I hoped for a tension filled two hours of action and suspense but had to settle for only the action. Riddick is ridiculously without fear and nearly invulnerable to any injury. Every time he is confronted by an opponent, be it human or alien, we know it is just another temporary setback that he will overcome in brief moments of screen time.  His safety and goal achievement is never in doubt.

It felt to me as if this screenplay was being written as the movie was being filmed. Riddick gets stranded on a planet. He finds a distress beacon that summons the bounty hunters. The bounty hunters want his head while he wants their ship. All the while creatures attack. Comic books have more intricate plots.

The details of the story are even weaker than the overall plot. The way Riddick tricks the bounty hunters into opening the locked cabinet is laughable. The scene where Riddick is relaxed against the air cycle while Johns battles a dozen creatures is meant to make Riddick look superior but why did none of the aliens attack him? Apparently a cool pose and calm demeanor blinds the monsters to you.

Just after the bounty hunters arrive on the planet, Riddick finds himself confronted by a severely wounded girl, that we never actually see die. Later, the bounty hunters do an inventory and discover morphine is missing. Clearly you would think that these two scenes are heading in the same direction but you would be wrong. The morphine and the girl are never mentioned again. It was almost as if the writers, as they were making this up, did not know where to go with it. Maybe something was cut in the editing room.

I had similar feelings about the ending. Riddick keeps every promise he makes, such as when he says, “When these chains come off you will die in the first 5 seconds.” A bit later he says that he will be balls deep in Dahl, the lesbian. She does not seem all that bothered by his statement and as the movie goes on, seems to warm to that idea.  Other than Johns, Dahl is the most featured bounty hunter, yet is missing from an important scene near the end. Johns and the religious bounty hunter are speaking to a shirtless, content looking Riddick. I expected Dahl to show up half dressed with a similar glow about her, as that was clearly where her relationship with Riddick was going. If the writers want to say it was not then why not feature her in that scene instead of the religious kid? My guess is a last minute change was made. You can guess why.

Riddick can be an entertaining, however one note character. He is like the old Johnny Weissmuller Tarzan. He is a loner who fights and kills as a way of life. The difference is that Tarzan also loved. It humanized him. Riddick would have been a better film if he had fallen for either girl in the film. That would create the idea of a future for him as well as an emotional bond for the audience to relate to. As neither of those things exist here, this film left me as emotionally barren as the planet it takes place on.

I'm more in agreement with Scott on this one. It was smart of the filmmakers to realize they weren't making Star Wars. They jettisoned most of the space politics and replaced it with straightforward action. The result is the most entertaining movie in the series thus far. It has the simple, action driven plot of Pitch Black, made with the production values of Chronicles of Riddick.

Oh sure it has its flaws. The plot lacks originality, some of the action is over-the-top, and it runs a bit long. But these are common flaws in most comic book movies. And although the character Riddick was actually first created for the movies, he is more genuinely comic book like than most comic-to-screen superheroes turn out to be.

They almost always try to make superheroes' personalities more real for the movie versions, but Riddick is a walking, talking comic book character living on the big screen, and this movie is filmed like one. There are certain shots of Riddick, accompanied by his domesticated wild dog-like pet, both of them silhouetted against the desolate alien planet horizon, that look like panels in a graphic novel (see photo).

Actually, Riddick is an anti-superhero. He is capable of incredible feats of strength, dexterity and endurance and, even as he kills indiscriminately, he is meant to be rooted for. I would go so far as to say that Richard B. Riddick, as portrayed by Vin Diesel, is the greatest original screen action hero to come along in the new millennium. He's a 28th Century hero for the 21st Century. He's an outsider and a former mercenary fighting against the whole goddamn universe.

As Eric mentioned in his review for Pitch Black, Diesel is of an indeterminate ethnicity; this gives him his own unique every man quality. His charismatic -if unusual- looks, intimidating physicality, deep growl of a voice, and bad-ass attitude make him the perfect actor for this role. Whereas some action stars seem like poseurs, Vin Diesel might just be a bad-ass in real life. Thanks to him Riddick is more than just an adrenaline rush to the eyeballs. 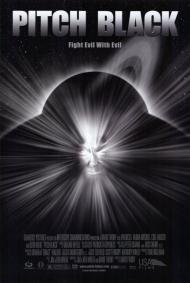 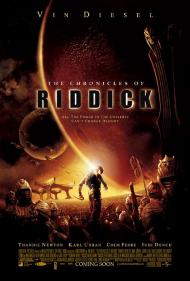