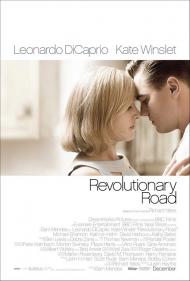 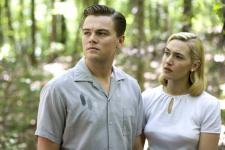 Leo and Kate give 4-star performances in this 2.5 star film.

Director Sam Mendes and his actress wife Kate Winslet must really hate the suburbs. Mendes made a splash with American Beauty about an unhappily married couple living there while his wife made a similarly themed movie; Little Children. Now they both return to the subject with Revolutionary Road. A movie most notable because it reunites Kate with Leo for the first time since 1997's Titanic.

Frank (Leo) and April (Kate) Wheeler are two suburbanites with an inflated sense of their superiority who are mired in unhappiness. April had aspirations of being an actress that went unfulfilled after she was married and had two children. Frank works at a boring desk job that he doesn't much care for. The most satisfaction he seems to get out of his job is having a meaningless affair with a secretary.

To break themselves out of their rut, April suggests they pack up and move to Paris. Frank goes along with the plan at first, but when he's offered a promotion he begins to have second thoughts. And when April turns up pregnant again the plan is shelved.

The best scenes in the movie are when Frank and April are arguing. It's during these marital bile throwing scenes that Kate and Leo get to show off their acting skills and the movie comes to life. However, the fights are so extreme and the two are so unhappy you have to wonder just why the fuck these two are still together. I know the movie takes place during the 1950s, but even then divorce wasn't unheard of. April doesn't come off as helpless; she holds her own in her fights with Frank and even has a quick affair of her own. What holds her to him isn't really explained. Perhaps it's simply the idea that so long as she's with him she can blame him and their marriage for all of her problems. If she left him she'd have to face up to the fact that she shares the blame for their unhappiness.

At the heart of the story is this idea that the suburbs are a wasteland of empty soullessness. Believe me, Frank and April's address is the least of their problems. How long after their move to Paris would their problems start up again? Probably about as long as it took them to settle in. Their problem isn't that they live in the suburbs, it's that they're two miserable bastards with years of pent up emotion towards each other.

Kate and Leo both give terrific performances. They do a 4-star job in a depressing and disappointing film. The years since they appeared together in Titanic have only improved their acting skills. Comparing this movie to that one shows you why so many love stories end in the death of one of the lovers. If Jack hadn't died at the end of Titanic, would he and Rose have moved to the suburbs and ended up hating each other? If Sam Medes directed it they probably would have.

Leo and Kate reunited (and Kathy Bates too)! The unhappy couple Frank and April reminded me of two other classic movie couples. They bickered like George and Martha in Who’s Afraid of Virginia Woolf? and they planned a move to Paris to escape the soullessness of America like Hubbell and Katie in The Way We Were.

I agree with Scott that the acting is superb and yes the story is depressing. Someone needed to tell April that she was clinically depressed. I’m sure with the right meds she could have led a happy life. Frank on the other hand just seemed bored more than anything else.

I didn’t see this movie as an attack on suburban life so much as it was about two really screwed-up unhappy people. Actually make that one really screwed-up person. Frank is unhappy but not to the extreme that April is. At the beginning of the movie it seems that these are two intelligent people trapped in a life they don’t want and that the move to Paris will allow them to blossom. Very quickly it becomes apparent that their problems run much deeper. And Scott is right no change of address will help them.

By the end of the movie I felt I had gotten to know Frank and what makes him tick. April remained an enigma for me. Just why was she so unhappy? We aren’t given a reason. Was she simply suffering from poor mental health? The way her character was written is the weak point in what is almost a great movie. 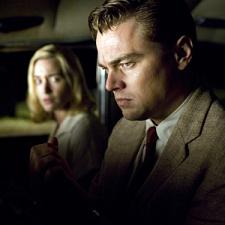 Although the arguing scenes are the best ones in the film, and the scenes that come across as the most realistic, the movie as a whole does not ring true. Much like any episode of Everybody Loves Raymond, the children are constantly absent. As any parent can tell you, your kids don’t leave you much time for privacy, let alone loud fighting.

I sympathized with Frank. He attends her performance to be supportive. When it does not go well she acts like her world is ending. He makes the “guy” mistake of wanting to talk her into a good mood when all she wants to do is stew in her own self pity. Okay, he had a emotionless affair, and good for him for doing it too. April does the same and never, ever, shows him any amount of sincere love the entire movie. Frank loves her as his every movement is with concern to her. The most enjoyment he gets out of the affair is when he tells April of it, so as to get a reaction from her. He is so starved for her that he would prefer an argument with her over neglect.

April is a study in misery. She is unhappy, although the reasons are vague. She puts up a strong front for awhile and then lets go, only to regain her composure again. She doesn’t love her husband, her kids or herself. In a macabre way, the movie ends on a happy note. It is the only way for Frank to be truly free of their toxic relationship.