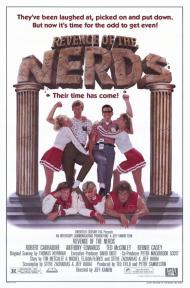 Who could guess these guys were nerds?

Revenge of the Nerds has become somewhat of a classic film.  While it is clearly dated by the old computers and use of Michael Jackson's song Thriller, it's message is timeless.  Everyone throughout school has felt a part of, or been lumped into a clique or group at some time.  Every one can relate to this movie.

Lewis and Gilbert arrive at college for their freshman year.  They are both walking stereotypes of nerds.  From their glasses to their pocket protectors, they scream science majors.  Just after arriving, they walk by the football team's frat house, going to their dorm.  As soon as the jocks see them, they start chanting, "Nerds, nerds, nerds....."   Lewis and Gilbert look around, until Lewis finally says, "I think they mean us." Thus starts their life in college as victims of the abusive football players.

After the jocks burn down their own house, they kick the freshmen out of their dorm sending the nerds packing.  They end up getting an old dilapidated house, and in a laughable montage, seem to fix the entire thing up in a matter of hours.  Not only are these guys computer geniuses, they apparently know carpentry.

The rivalry continues with the jocks as they each play pranks on each other.  The jocks send pigs into the nerds party.  They retaliate by having a panty raid on the jock's sister sorority.  They also install cameras to spy on the cheerleaders when showering or in bed.  A blind person could spot their cameras but not these cheerleaders.

The rivalry comes to a head with the homecoming festival.  In a series of silly events the nerds beat the jocks.  The jocks then destroy their house.  This culminates with Gilbert giving his, "...I'm a nerd..." speech, While Queen's, We are the Champions plays in the background.

When I first saw this movie in 1984, I thought of it as very politically correct as the group of nerds features boys of every ethnic background.  Looking at it now, it is a bit politically incorrect.  The one black nerd is gay, and he flames it up most of the movie.  I wonder if Patrick would be offended by him.  To get the party started, they all smoke some weed.  So many comedies today seem to shy away from nudity but this film features several nude shots including one full frontal. "We've got bush!"

One of the most unusual aspects is that one nerd is a minor.  He is a child genius living with them.  He is at the party where they drink alcohol and do drugs.   He does aerobics in his underoos and watches the naked girls on the spy cameras.  He is definitely of the age to be interested in sex, it is just not often portrayed in American films.

Revenge of the Nerds has many memorable moments.  There is Gilbert's girlfriend Judy, singing, "So I gotta be free, so I gotta be mee..."   There is Lewis's laugh.  There is the Japanese student, "Hair pie!"  There is Booger winning the belching contest with Ogre, and so many more.

The best thing this movie has it that it shows the absolute ridiculousness of people who pick on weaker people.  "Those nerds are a threat to our way of life."  Head Jock Stan explains at one point.  Really Stan?  How is that?  Perhaps Lewis knows when he explains, that "Jocks only think about sports, nerds only think about sex."

Revenge of the Nerds is still funny today, 26 years later.  My 16 year old liked it.  This movie should not have worked as it is filled with errors.  What parent would allow their kid to be forced out of a dorm that they are paying for?  Carradine, Armstrong and Gibb were all 30 years old then and look it.  If you have not seen this movie in awhile, you should.  It truly stands the test of time. 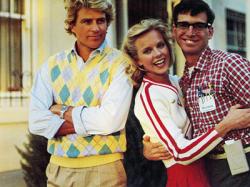 Ted McGinley, Julia Montgomery and Robert Carradine in Revenge of the Nerds.

What surprised me about this movie, which I hadn't watched in years, isn't that it was dated, but rather that, apart from the song "Thriller", the date at which it seems to be dated, is more like 1954 than 1984.  I know the movie features computers and a robot, but the way they are shown makes it clear that the writers (who were all born in the 1950s), knew nothing about either of them.  The jocks versus the old school nerds, Greek Councils, panty raids and the corny songs and skits performed at the carnival seem to belong in an Archie comic of the 1950s. I was expecting to feel some 1980s nostalgia from this movie, but it barely even felt like it took place during the 1980s.

Like you Eric, I couldn't help but notice how old all of the students look.  Carradine in particular looks as though he should either be playing a freshman's father or one of their professors.  John Goodman, who plays the football coach, was just 2 years older than the actors playing his team.  It's a bizarre bit of casting that somehow still manages to work.

I don't know what Patrick would think, but I don't think the character of Lamar is all that offensive.  He's not even really a "nerd", at least not in the traditional sense, although in this movie it just seems to mean anyone who's considered different or an outsider, in this case, gay.  In fact, Lamar is one of the cooler members of the group.  He has dress sense (for a gay man in the 1980s) , is the lead singer of their musical act and is the only one able to get a date for their party.

The Toshiro Takashi character and all his Asian cliches is far more offensive and (political correctness be damned) funny than Lamar.  As wrong as it is, every time he mispronounced something and Booger couldn't understand him, I laughed out loud.

I once read a list of things that are shown as romantic in movies, but would get you arrested in real life and this movie was on that list.  Lewis dresses up like Stan during the costume portion of the carnival and ends up having sex with Betty.  Now in real life, that would get you in a whole lot of trouble, but here of course, it just makes her love him.  It's silly and not meant to be taken seriously, but I had to point it out.

One other niggly little thing that has always bugged me, since the first time I watched this movie.  Why, at the beginning, does Lewis's father drop them off a mile from their dorm room?  He drives them to college, they unload the car and then carry a heavy load of luggage for, seemingly, miles to their dorm room.  Why not just drive them to their dorm?

The one thing that does make this feel like the 1980s is all the nudity.  In the 80s, they never shied away from showing nudity in comedies and I miss that.  If there's one thing that can improve any movie, it's tits.  I mean, not every movie has to be kid friendly, does it?

Although the time period may feel ambiguous, its message of everyone feeling like an outsider and just wanting to belong, is universal, I agree, and will never go out of style. 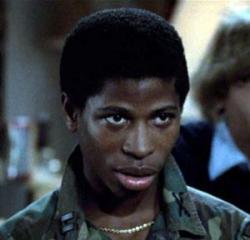 Larry B. Scott as Lamar Latrell in Revenge of the Nerds.

Revenge of the Nerds works because of its likable and memorable characters. Each of the nerds is someone you can root for to succeed. And although these nerds are geeky looking and not at all popular they don’t lack in self-esteem. They think of themselves as cool and this gives them the confidence to challenge the jocks. And of course by the end of the movie they are cooler and more popular than the jocks. This just might be the greatest anti-bullying movie ever made.

Scott, I get why you felt it seemed like the 1950s but to me it screams early 1980s; especially the synthesized music performed by the nerds during the talent contest with Lamar rapping and his and Wormser’s popping and locking dancing.

Speaking of Lamar, as a gay man myself, I wasn’t offended by him. On the contrary I found him refreshing. Normally an effeminate man is played strictly as an object of scorn. Lamar is downright groundbreaking in the sense that he is a fully developed character and not just the butt of a joke in a few scenes. He is accepted as a gay man by the other nerds and (as Scott wrote) is actually one of the least nerdy. He is athletic (his limp-wristed javelin throw being one of the funniest moments in the entire movie) and as stated above is the only one to get a date for their party.

This movie was made at the dawn of political correctness. It makes a point of being inclusive but doesn’t beat the audience over the head with it. And it never loses its sense of humor and silly fun. I too cracked up at Takashi’s broken English, “Maybe we should have robster craws.”

Revenge of the Nerds, for all its nudity and crude language, is actually a rather sweet little comedy with a great timeless message.