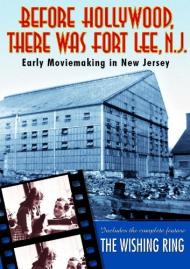 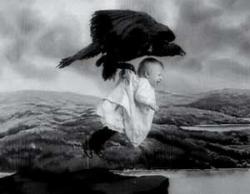 Jinnie Frazer was either in character, or not happy about playing this role.

Before he directed, D.W. Griffith acted.  Rescued from an Eagle's Nest finds him playing a lumberjack.  The 6 minute film starts with him leaving his wife and baby, to go to work.  The wife leaves junior outside to play.  Leaving an infant unattended out doors in the wilderness turns out to be a mistake.   Who knew that was a bad choice?

An eagle swoops down and carries the baby off.  The mother rushes outside in time to see it being carried away.  She races to her husband and the other woodsmen to inform them of the event.  Luckily they happen to know exactly where the eagle's nest is on the side of a cliff.

Dad is lowered by rope to retrieve the baby, but is attacked by the aggressive bird before he can climb back up.  Dad does battle and saves junior.

The best moment in the entire film is when the slow thinking mother sees the baby being carried off.  Her first thought is to grab a gun and shoot it down.  Luckily she has a couple of brain cells functioning and decides otherwise.

It was probably not intended to be a comedy when it was made, but I laughed the entire time.  Check it out on youtube. 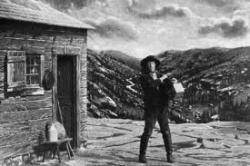 I laughed too, especially when the father was fighting the eagle. Still, I’m thinking these are pretty decent special effects for 1908. The eagle looks more real than that fake bat used in an episode of Gilligan’s Island more than half-a-century later. It’s fascinating to think that the baby girl in this movie is probably long since dead or possibly still living at the age of 103.

Most movies during the first decade of the 20th Century were about the length of a music video. It is interesting just how much effort went into making them. Audiences were probably in awe of the scene where the eagle swoops down and snatches up the unattended infant. Mothers may even have shrieked with horror, in place of the mirth we find in it today.

Although there are no close-ups to judge Griffith’s acting by, I will say he seems a bit stiff. I think it is safe to say that his real talents were behind the camera, as he, more than any other person, developed the language of American cinema during its earliest years. 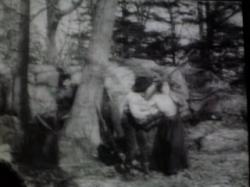 My favorite moment in this short also involves the mother.  She sees that her baby has been stolen by the eagle and realizes that shooting it will kill the baby too, so she decides to run and get her husband because, let's face it, seconds count.  Her baby could be killed at any moment!  So what does she do first?  She runs inside to get her hat!  Her baby might be killed, but by god she's not going to let someone see her bare head while it's happening!

The only seriously good moment is the iconic image of the baby being carried by the eagle against the dramatic backdrop, as pictured at the top of Eric's review.  To be honest though, it looks better as a still photograph than it does when it's in motion in the film.

While most of the short takes place on a set, there is a short portion in the middle that was filmed outside.  This is only a problem because while the sets are fine when the short starts, as soon as you seem them following the location shot, they just look shoddy and fake.

It seems petty to criticize such old movies when they were still learning how to make them during this period and there is certainly plenty of historical interest in this.  From a modern perspective, there's not very much of entertainment value though.