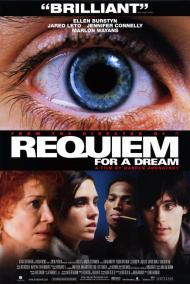 Requiem for a Dream is a dark, depressing film about addictions.  From start to finish you watch characters descend into madness.  Like driving down a highway with all kinds of bright orange warning signs, you wonder why they continue on such a destructive path when it is obvious trouble lies ahead.

Harry is a young drug user who thinks nothing of stealing his poor old mother's television set to pawn it for drug money.  The TV is his mother's pride and joy as watching it is all she ever seems to do. Harry and his best friend Tyrone decide to become dealers.  Tyrone wants to make good by his mother, and dealing drugs is the only way he seems to know how.  They actually make some money but they cannot stop using their own product.

His mother, Sara, gets a notification that she has a chance to appear on television.  This excites her beyond comprehension.  She immediately gets her hair dyed and starts a diet.  She gets a prescription for amphetamines and starts racing around her apartment.  The weight comes off, be her sanity disappears as fast as the fat.

Harry's girlfriend, Marion, seems at first to be only a social drug user.  The film suggests she comes from some money but has since been cut off.   She loves Harry, but eventually loves getting high more.  By the ends she is nothing more than a crack whore, doing live sex acts for drug money.

Ellen Burnstyn was nominated for an Oscar for her performance, and deserved it.  She starts as a sweet old lonely lady.  She lives through her memories of her deceased husband and hopes for her son.  The scene where she cries to Harry about being lonely is heartbreaking.  "I'm alone. Your father's gone, you're gone. I got no one to care for. What have I got, Harry? I'm lonely. I'm old."  She makes getting old seem hopelessly sad.

Sara watches television all the time, but we only see her watching the same infomercial over and over.   This is a brilliant way for the director to show that television programs are nothing more than hot air trying to sell the viewer something.  The announcer makes generic statements about what is good and has his audience chant, "Be excited, be, be excited."

Requiem for a Dream implies that many things are addictive, not just drugs and medication.  Sara is addicted to television, becoming fat and lethargic watching it.  It implies that the man Marion eventually works for is addicted to sex.  Nothing wrong with getting laid, but his guys stages live sex acts in his home.  If this film was made a few years later I am sure internet porn would have gotten a mention as well.  The point being that anyone can be an addict of something.  The movie does not mention it but we could include body builders who use steroids.

Too much of anything can be bad. When all the characters started using, none thought it would ruin their lives.  They obviously got some satisfaction from whatever they were using and wanted to feel it again, so they kept on using, wanting that satisfaction more and more.  We watch Sara go from an excited, coherent woman to a blubbering nut job.  We understand why she started down this destructive path and know without some severe interference that she will soon crash.

Burnstyn is not the only cast member who impresses.  My opinion of Leto has always been that he dresses like a European artist, looks like Zach Efron and eats only vegetables picked by a communist.   However, that all works for him in Requiem for a Dream as he is playing someone full of shit.  Connelly still had her fake boobs and was still willing to do a nude scene.  (I am surprised to have reviewed one of her films before Scott)  I have never thought much of Marlon Wayans as an actor, but is actually adequate as Tyrone.

Requiem for a Dream shows why some people use drugs better than any film I have ever seen.  We see it's hopelessness and it's debilitating power.  This is not a fun film to watch, but it leaves an impression.

Hubert Selby Jr. was a drama queen. Or at any rate he sure loved exploring the seamier side of inner city living in his bleak and uncompromisingly depressing writing. His 1964 novel Last Exit to Brooklyn was originally banned and wasn’t made into a movie until 1989. Similarly Requiem for a Dream was written in 1978 but didn’t make it to the big screen until 2000. Anyone looking for a happy ending should stay well clear of his work.

The movie, helmed by the talented Darren Aronofsky, whose influences can be traced to such diverse directors as William A. Wellman and Stanley Kubrick, is brilliantly shot and edited. It definitely gives the viewer a visceral experience. When the characters are experiencing that euphoria of being high you feel it too. When they hit rock bottom the clever camera work drags us down too.

As Eric wrote this isn’t a fun film to watch but it is intensely riveting, like a train wreck you cannot turn away from. The story seems a bit anachronistic at times though. Its portrayal of the doctor’s readiness (and the easy accessibility) to prescribe amphetamines and barbiturates seems overdone, and in the use of shock treatment to cure addiction. These two ideas seem more at home in the 1970s than at the more enlightened turn of the millennium.

The cast is top notch. Burstyn will break your heart. This being Hubert Selby Jr. her story arc is harrowing. She goes from being merely a pathetic lonely old woman to one of those crazy raving vagrants you see on the subway. She gives the greatest performance of her career. Leto, Connelly and Wayans may be outshined by her radiance but they hold their own dramatically as they each descend into a different hell of their own making.

I get that Selby had a dark and depressing life in many ways, including a long lasting heroin addiction. The resulting Requiem for a Dream (which he also penned the screenplay for) is a story that is relentlessly and irrevocably sad. After a while it all becomes a bit much. Watching these four characters spiral downward over the course of a few months makes a great cinematic warning label against doing drugs, but repeat viewings are not advised. 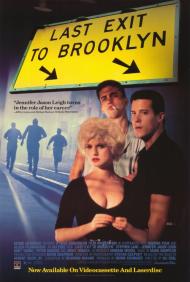