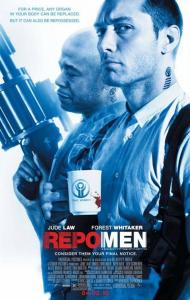 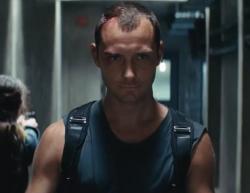 Repo Men wants to be a kind of Logan's Run for the 21st century. Instead of focusing on someone who kills people when they turn 30 suddenly turning 30 himself, it focuses on someone who repossesses artificial organs for a living suddenly facing having their own organs repossessed. It's an interesting premise, but a poor script with some major plot holes really hinder its execution.

Jude Law plays Remy, a Repo Man for The Union, an organization that sells artificial organs on a finance plan with a high interest rate. It's Remy's job to go out and repossess the organs of those who fall more than 90 days behind on their payments. At first I thought this was going to be some kind of allegory to the current credit crunch/ mortgage crisis, but this script doesn't have the brains for that and is instead just a straight out action movie.

When Remy is injured on the job and ends up with an artificial organ of his own, he suddenly has a new perspective on his job and life in general. His transformation is so sudden that it lack all credibility. Also, the fact that his company won't give him some kind of deal or take the payments out of his paycheck is a little ridiculous. He's the best Repo Man they have and killing him by repossessing his heart would only end up costing them money. I would have preferred the story if Remy never repented, but rather just wanted to survive. I mean, he's a mass murderer for a living and just because he suddenly doesn't want to kill anymore doesn't suddenly make him a good guy, so why even try? They should have kept him a villain and just had him trying to survive rather than pretend he's suddenly noble.

So rather inevitably, Remy ends up on the run from his own company and his best friend played by Forrest Whitaker is the Repo Man sent to hunt him down. Sadly, it takes nearly an hour of the movie before this happens, when it should have happened straight away. It takes far too long for the story to be set up.

About 30 minutes into this movie a thought occurred to me that nearly ruined the film for me. The whole crux of the plot is that artificial organs are being installed and someone is hunting down those people who aren't paying for theirs. Well, if artificial hearts, eyes, ears and every other organ in the world can be created, why couldn't a remote control switch be built into them so that they could be turned off after 90 days of non-payment or at the very least a have a GPS built into them so the Union would always know where the organs are. I mean if the organs could be turned off remotely, there goes the whole plot right out the window. It's such an obvious device that the script should have dealt with it, even if just by saying there was some kind of blocker being used to prevent the remote from working.

Despite the plot holes and a really annoying ending, I wasn't completely bored. Law was much better in the lead than I thought he would be. I hadn't previously thought of him as an action star, but he plausibly pulls it off. The action scenes are at least filmed well, even if there's not enough of them. Whitaker and Schreiber, the only other two names in the film are also quite good in smaller roles.

When they decided to not make this movie about anything they really should have amped up the action. The only time I was able to enjoy it was when I was able to turn my mind off. Anytime the action stopped and the talking started (and that was too often), the holes in the plot showed through.