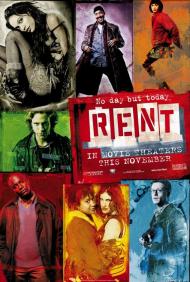 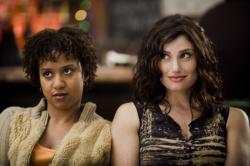 The Broadway version of Rent opened in 1996 and it should have been the musical that dragged Broadway into the 21st Century. Although it would go on to win the 1996 Tony Award as Best Musical, 1996 New York Drama Critic's Circle Award as Best Musical, the Drama Desk Award as Outstanding Musical, the Outer Critic's Circle Award and three Obie Awards, the tragic death of its creator Jonathan Larson, just hours before the original version of the show debuted Off-Broadway, ended the revolution of "modern" musicals that this show promised to bring. Now, almost ten years after it premiered on the stage, a movie version, featuring all but two members of the original cast, is being released.

Inspired by Puccini's Opera, "La Boheme", but updated to New York City's East Village, circa 1989, Rent tells of a year in the life of a group of friends, detailing their loves and losses. And like an opera, the staged version is completely devoid of spoken dialogue. Everything is in song. For the movie version, dialogue has been added, mostly rearranged lyrics from the original that have been adapted to sound better when spoken, but is still 90% told through song.

The group of friends include Mark; a wannabe filmmaker who documents the year and is the heart of the story, his roommate Roger; a musician suffering from AIDS as the result of a drug habit that he shared with a now-dead girlfriend, Tom Collins; a former roommate of Mark and Roger's who is freshly returned to New York after being fired from MIT, Angel; Collins cross-dressing boyfriend who is also suffering from AIDS, Benny; another former roommate who married rich and now owns the building in which Mark and Roger live, Maureen; Mark's ex-girlfriend who left him for Joanne; a lawyer, and Mimi; a stripper and another AIDS sufferer who falls in love with Roger.

Conflict in the story is provided by Benny, who plans to tear down several buildings in the East Village and build a Cyber-Studio in their place. Maureen stages a protest, in part because the destruction of the building will mean that she loses her performance space, and Benny tries to arrange for Mark and Roger to convince her to stop her protest by promising them that they can stay in his building for free if they stop her. If they can't convince her, then he demands that they pay him the entire last year's rent, which he let slide out of friendship.

Perhaps the best decision by director Chris Columbus was to bring back the original Broadway Cast. The only two exceptions are Rosario Dawson as Mimi, and Tracie Thoms as Joanne. No one knows these characters better and despite being ten years older, the roles still fit them perfectly.

Before seeing it, Columbus would have been the last director I ever would have picked to direct this movie. I mean, the director of Home Alone doing Rent?!?! The thought is horrifying. I must humbly apologize for the presumption as Columbus does a fantastic job. His most adult film to date, it retains all of the original elements of the play and adds to them. So many stage to screen translations are really just filmed versions of the play (see the upcoming The Producers), whereas with Rent, Columbus has transformed the locations and the action so that they are truly cinematic. Mark's fantasy during the "Tango Maureen" number and Collins and Angel's choreography on the subway during "Sante Fe" are two good examples.

My one complaint is the additon to the film of the commitment ceremony between Maureen and Joanne. Not only is it wrong for the time period, but for a group of people who pride themselves on their Bohemian lifestyle to do something that so smacks of respectability is completely out of character.

I've seen the stage version of Rent twice now. Once here on Broadway, and once a few years back in Kalamazoo, Michigan. In Midwest American Kalamazoo, nearly a quarter of the audience walked out during the intermission. The question is, when the movie rolls out, will that same audience and others like it, walk out or remain til the end credits? 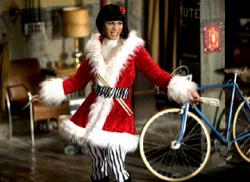 There seem to be very few openly gay movie critics, especially in the mainstream media. As a gay man I was deeply touched by this movie. Like my brother I had seen the stage musical version. While film can never completely duplicate the experience of hearing live singing and music, it can I think, touch a deeper place emotionally than stage acting can. So while I did enjoy most of the songs, it was the highly charged emotional drama between the characters that affected me the most.

I also think that the story works better now than when it first appeared onstage nearly a decade ago and it will continue to become enriched as time goes by. Now we can look back on that time period with nostalgia. In a way Rent is to the late 80's what Hair is to the late 60's . They are both about young bohemians living in the city. In the 60's Vietnam was the main issue, in the 80's it was AIDS.

I think everyone that sees this movie will have a favorite character. Mine is Tom….Collins. (you know, like the drink) His love affair with Angel is the most romantic -and unfortunately tragic- gay relationship I've ever seen in a mainstream movie.

I disagree with only two things Scott wrote. First of all I don't think Mark is the heart of the story. True, he is the practical one around whom the other's lives revolve. But Angel is clearly the heart of the story. Like many drag queens I've known he is overflowing with joy at being alive. They don't call us gay for nothing.

The other point I disagree with my brother on is the inappropriateness of the commitment ceremony. I was friends with a lesbian couple that had one in the very early 90's, long before mainstream America began arguing the issue, when it most certainly would not have been considered respectable or middleclass in any way. So while it may not have been in the play it certainly would have fit with Maureen and Joanne's bohemian life.

There is one minor detail that is wrong for the time period however. It is absolutely unimportant to the story but I'll mention it anyway. In one of the songs Angel sings he makes a reference to Thelma and Louise. That movie wasn't released until May of 1991.

Finally a movie musical that features real singers and dancers. In fact Rent is now my favorite musical so far in this millennium. 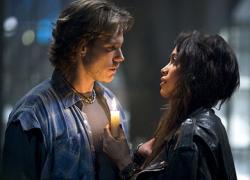 I think the point that Scott is making about Maureen's and Joanne's wedding is that it takes place in such an opulent place. Scott is not objecting to their "marriage" as he is to the style of their reception. It was very normal looking and thus out of character for a girl who likes to get on a stage and have her audience "moo" with her.

I agree with  Patrick that "...Rent is to the late 80's what Hair is to the late 60's..." In both movies a bunch of lazy, drug using young people rebel against the establishment as an excuse to avoid responsibility. Notice how when Mark is offered a great paying job he objects with the tired old art school complaint about not wanting to "sell out."

The characters in this movie are all full of passion and desire but their energy is all focused in wrong directions. From Tom getting fired to Maureen's pathetic protest, I watched this movie thinking, "get a job and grow up already!" The group dislikes Benny who has now made good and is financially set. Obviously he committed the bohemian's cardinal sin of actually being responsible enough to get and keep a job.

Sure this movie plays like a tragedy, but is every cross dresser who ever lived a saint? Ever since John Lithgow went drag in The World According to Garp it has become a stereotype to show cross dressers as the kindest human beings since Jesus Christ.

Rent has a few mildly catchy songs but everyone seems so miserable and pathetic.  "I think they meant it when they said you can't buy love. Now I know you can rent it, a new lease you are my love - on life... be my life."  I never found myself liking any of these young people who all really just need a good kick in the ass.