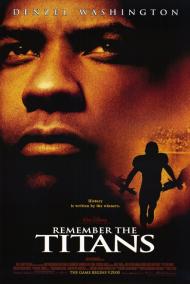 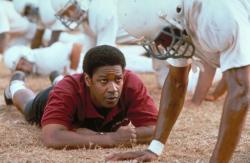 Denzel Washington in Remember the Titans.

A rousing, cheer out loud, feel good movie that never becomes self-indulgent or heavy-handed. Denzel Washington stars as Coach Boone hired as the T. C. Williams High football coach in Alexandria, Virginia in 1971 at a time when the school has just been racially integrated. This movie really makes you care about the people in it and for sheer entertainment and audience enthusiasm is probably the best movie I have seen this year (with the possible exceptions of X-Men and Chicken Run).

Denzel is his typically brilliant self as the stubborn yet understanding coach who, through his players, is able to affect change throughout the community. This movie, however, is really a team effort and though he is the marquee name the story focuses as much, if not more, on the players themselves. At the beginning of football camp the entire team is racially separated. Coach Boone tells them that they must get to know every player on the team of a different race, he also makes them eat and bunk with a member of another race. We get to know the teammates as they struggle with and overcome their own biases and fears.

Once back in the real world, however, some of the old habits return and some rifts between players are reopened. Will the Titans pull together in time to become a winning team? And more importantly can camaraderie on the athletic field lead to increased racial harmony in the larger community? Judging by the very positive reaction of the very diverse audience watching this movie with me, I would have to say that the uplifting true story of Coach Boones' Titans is still doing just that. 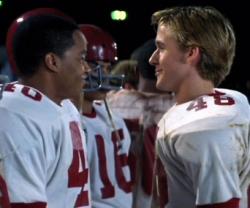 Donald Faison and Ryan Gosling in Remember the Titans.

Patrick,  Remember the Titans is clearly  trying to be a, "...rousing, cheer out loud, feel good movie..." but I disagree with you completely when you wrote that it, "...never becomes self-indulgent or heavy-handed."  This is an extremely  "heavy" handed message film about whites and blacks learning to get along.  It makes a point about the need for racial harmony within the first five minutes and continues all the way through to the final groan inducing line, "People say that it can't work, black and white. Here, we make it work every day. We still have our disagreements, of course, but before we reach for hate, always, always, we remember the Titans."

It is very one sided.  When Ryan Gosling plays and sings his country music his black room mate gives him disgusted looks and says, "Does the term "cruel and unusual punishment" mean anything to you?"  Gosling is later shown liking his black room mates music but never the other way around.

Remember the Titans goes so over board with melodrama that Coach Boone even gives a lengthy, melodramatic speech comparing his white and black players to civil war soldiers in battle.  I grew weary of being reminded of race.  Coach Boone states in a different speech,  "Tonight we've got Hayfield. Like all the other schools in this conference, they're all white. They don't have to worry about race. We do."  To another coach he says, "The world don't give a damn about how sensitive these kids are, especially the young black kids. You ain't doin' these kids a favor by patronizing them. You crippling them; You crippling them for life."

Of course the players all come together with the white kids becoming nicer and a black player dropping his attitude.  The black and white player who fought become best friends.  That is all sweet but the journey to acceptance seems far to fabricated.  Evil rich white guys try to bribe the white coach and pay off the refs to cheat against the Titans.  Coach Boone's neighbors come out side and lean out windows to cheer for him when he arrives home after a big win.

The pontificating became tedious.  The white coach tells the team,  "I hope you boys have learned as much from me this year as I've learned from you. You've taught this city how to trust the soul of a man rather than the look of him."

This film could have been so much better if it just let the story play out naturally and allowed the audience to witness the unification going on without having to be reminded of it every five minutes.  When a white player's dad brings his son to meet coach Boone instead of another team, he says of the other coach, "He won't let blacks play on his team. The way I see it, if these boys can fight a war together, they can play football together."  Patrick may not mind Remember the Titans spoon feeding it's message, but I did.  It is so over done that it nearly gagged me with it's shovel sized dose of tolerance.

Considering the ratio of black coaches to black players in sports, the story of coach Boone is a unique and fascinating one.  As of this writing about fifty percent of college football players are black, yet only three percent of head coaches are black. Remember the Titans should have focused more on him and let the uniting of the team play out in the back ground as a result of his efforts and determination. 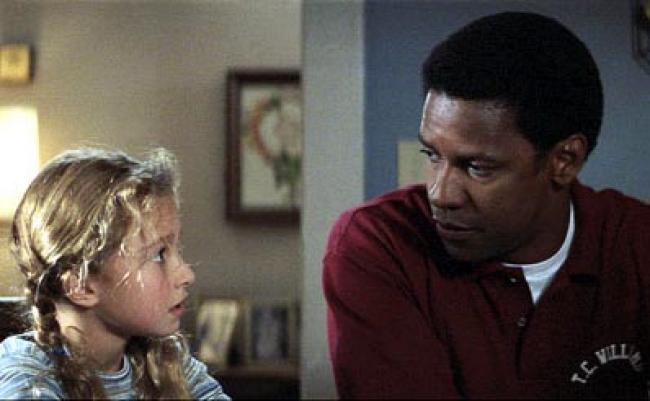 Hayden Panettiere and Denzel Washington in Remember the Titans.

Although the film begins with a caption that says, "Based on a True Story", it would be more accurate if it said, "Inspired by a True Story", because many of the facts have been altered.

The most telling fictional aspect is that while in the film, Coach Boone says, in one of the lines that annoyed Eric, "We are not like all the other schools in this conference, they're all white. They don't have to worry about race. We do.", in fact, all the other schools they faced in the 1971 season had been integrated years earlier (and in fact, T.C. Williams High itself had been integrated back in 1965).

Another change made for dramatic reasons is that, while it's true Gerry Bertier was injured and paralyzed in a car accident, it didn't happen until after the football season was over. Yet one more notable change by the scriptwriters is that quarterback Ronnie Bass is depicted as a longhaired hippy from California and is implied to be gay. In real life, Bass is a lifelong heterosexual and most of the other players on the team sported long hair as well, including Gerry Bertier.

The attitudes by many in the film seem to be more akin to those you would expect to find 10 years earlier maybe, but not in 1971. While it's true that none of the changes effect the entertainment value of the movie, it does always annoy me when Hollywood tries to sell a movie as a true story, when so much of it is fictional.

I don't know that "heavy-handed" is the right word to describe this movie, but it's certainly not subtle about its message of racial harmony. And with the character of Ronnie Bass, it also wants to throw in sexual orientation harmony as well. It's actually the easy acceptance of Ronnie by his teammates that's the hardest to believe. While the racial attitudes seem old fashioned even for 1971, the way everyone shrugs off the fact that Ronnie is gay seems far ahead of the time depicted. This being a Disney film, the racial strife is kept very rated "G". The language used would have been much harsher than is shown.

The speech at the Civil War graveyard is very over the top. This line in particular stuck with me, "If we don't come together right now on this hallowed ground, we too will be destroyed, just like they were." Comparing the strife of this brawling football team to those soldiers who gave their lives for their beliefs and their country, seems a bit much. However, I will say, to some people football really is that important and so I suppose it might feel that way to them.

While the script does its very best to leave no heartstring untugged, it is up to the cast to hold the movie together. Fortunately, they all do a good job. Denzel is as good as always. Like Eric, I wouldn't have minded if the film had focused more on his character and less on the boys. His relationship to Will Patton's Coach Yoast was one of the most interesting in the film.

Several supporting members of the cast have since become quite famous. Hayden Panettiere is a scene stealer as little Sheryl Yoast, the football obsessed 9 year old daughter of Coach Yoast. Kate Bosworth has a very small part as Gerry's girlfriend. And Ryan Gosling, before he became the heartthrob of millions, has a small part as the player who proves his team spirit by stepping down to let another, better, player take his place. All of the cast working together make this schmaltz at least palatable.

Although it's obvious how the final big game will turn out, it is filmed well enough and the music swells enough that you almost can't help but get caught up in the outcome. Yes, this movie does deliver its message with a shovel and a hammer, but there's enough entertainment and fine performances to almost make up for its lack of subtlety.