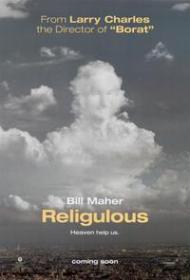 As it turns out Religion is no laughing matter.

Director Larry Charles (Borat) and comedian Bill Maher give us this interesting and often downright hilarious look at the Western world’s big three religions: Judaism, Islam and Christianity. In a series of interviews with religious leaders and others he asks straightforward questions that are answered with truthful if absurd statements. For example when discussing evolution Maher asks Senator Mark Pryor, a Democrat from Arkansas, “If it could possibly have been Adam and Eve 5,000 years ago with a talking snake in the garden?” The Senator replies in the affirmative and Maher says, “It worries me that people are running my country who believe in talking snakes.” Pryor offhandedly quips, “You don’t have to pass an IQ test to be in the Senate.”

There are many others who appear equally foolish when confronted with logic. Faith, by definition, goes against logic. According to Maher faith is an excuse to not think rationally. He talks to an Hispanic minister in Florida named Jose Luis de Jesus Miranda. This guy claims to be the reincarnation of Jesus and reputedly has 100,000 followers. He disputes the claim that Jesus was against wealth as does the Reverend Jeremiah Cummings, ex-member of the R&B singing group Harold Melvin and the Blue Notes. Both these men are dressed in expensive suits.

He talks with a priest outside of the palaces of the Vatican and asks what would Jesus think about such ostentatious wealth. The priest answers honestly that it is hypocritical. Maher comments to two Gay Muslim activists that they have a rare job description. He also takes us to a Creationism Museum in Tennessee where figures of children frolic near T-Rex’s. And a Holy Land amusement park in Florida that re-enacts the crucifixion of Jesus to a paying crowd. Tourists applaud, cry and snap photos while Jesus is beaten and scorned.

The inherent violence of Islam is discussed, including the fatwa on writer Salman Rushdie and the more than 50 people who were murdered over cartoons depicting the prophet Mohammed. Maher is taken into a Mosque and while his guide disavows violence another Muslim, speaking in Arabic, makes a violent statement about Maher. Not to ignore Jews he shows us the elaborate lengths that some go to, to avoid breaking the rules of their Sabbath. I didn’t realize that there are a billion Muslims in the world and only 14 million Jews. Not exactly a fair fight.

Maher ends the movie on an ominous note, suggesting that religious beliefs may well spell doom and destruction for mankind. As truthful as this may be it upsets the balance of the humor that has come before. Religion, it turns out, is no laughing matter.

Two men, each pretending to be a prophet.

Maher gives nearly an hour of screen time to mocking Christianity. He interviewed hundreds of people for this movie, and then included only those that fit his criteria in the film. He talks to all kinds of Christian people and church leaders. They range from crazy to hypocrite. He speaks to several Muslims and all argue with him that theirs is not a religion of violence. They dismiss the acts of violence committed by Muslim terrorists as merely political, and not at all about religion. Maher whimps out when he talks about the 50 people killed after a cartoon of Mohamed was published. He never shows the cartoon.

At least Maher never tries to mask his hatred for religion. His very first sentence is that religion is detrimental. He makes it very clear that he wants people to doubt religion, and considers it the root of all evil. "Religion is dangerous because it allows human beings who don't have all the answers to think that they do."

In that lies my one and only problem with Religulous. Yes, there are lots of people who invoke the name of their God for money, power and exscuses. Their are also people who come together in an organized religion and do great things. There are churches who give plenty to charity. There are people who feel better about themselves after attending a service. There are people who have difficult challenges, and talking to God, real or not, helps them sort through their problem. Their "faith", jusitfied or not, can actually help them cope with a problem. Maher disagrees, "Faith means making a virtue out of not thinking. It's nothing to brag about. And those who preach faith and enable and elevate it are intellectual slave holders, keeping mankind in a bondage to fantasy and nonsense that has spawned and justified so much lunacy and destruction."

Religulous has some funny moments. I liked how he challenged the Muslims on their warped view of their own religion. The history lesson on how Jesus’s story is not original was very fascinating. It would have been nice though, if he had spent at least a few minutes talking about how some good has come from religion. I know many, very wonderful people who are devoutly religious. I also know a few religious nuts. Maher chose to only showcase the nuts. 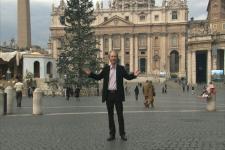 Maher is just preaching to the choir.

Eric, Hitler reduced unemployment in Germany, built the Autobahn, created some magnificent buildings, made Germans proud to be German again and generally turned the country around financially, but none of that outweighs the bad things that he did. The same argument could be said of religion.

The biggest problem with this movie is that it is preaching to the choir. Poking fun of someone's beliefs is the worst way to convince them otherwise, especially when we're talking about religion. Atheists often make the mistake of thinking they can reason someone out of believing in god, when of course reason or proof denies faith, which by its very definition is believing in something without proof. And any logical points a non-believer makes that can't be argued with are inevitably dismissed by the "God works in mysterious ways" line. Anyone with true faith who watches this movie is simply going shake their head at Maher and probably end up praying for his soul.

I also agree with you Eric that Maher only chooses to focus on the more colorful aspects of religion and not your average believer. Obviously he does this for laughs, and to be fair, he does generate some, but honestly, they feel like cheap and very easy laughs. With some of the people he talks to, it's almost like making fun of someone with mental problems. Others, such as the minister in the nice suit and the descendant of Jesus, I wonder, do they know they're full of shit and are enjoying themselves or do they truly believe what they're selling?

Maher also only concerns himself with Western religions. Patrick, you mention the difference in size of the number of Jews and the number of Muslims and it is dramatic. In fact the number of Jewish people is less than a quarter of one percent of the world's population. Hinduism, the world's third largest religion, isn't mentioned at all and they make up almost 15% of the world population and Buddhism is likewise neglected, despite being 27 times more widespread than Judaism.

Frankly, I believe (Now there's a dangerous phrase) that religion is doomed, at least in the Western world. The number of people who call themselves religious has been dropping for years in Europe and a recent study done in the US shows that the number of young people here who claim no religious affiliation has skyrocketed in the past decade, climbing according to some reports to as high as 40%. Its eventual demise seems as inevitable as the eventual legalization of same-sex marriage (although doubtless both things will be opposed by the same groups).

Will this movie have anything to do with the slow dissolution of organized religion as we know it today? I doubt it, but it's a sign that it's happening.