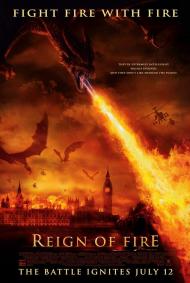 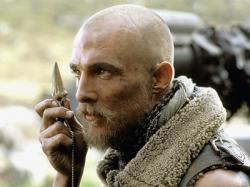 Matthew McConaughey in Reign of Fire.

The movie begins in London, England with a young boy exploring an underground worksite where his mother works.  A cavern is unearthed where a dragon lies sleeping.  When he wakes up he rises to the surface and begins destroying and propagating with equal speed.  Soon most of the Earth is destroyed; burnt by dragon fire.  Mankind is reduced to pockets of civilization where they hide from the dragons and try to eke out their existence.

One of these groups of survivors is led by Quinn (Christian Bale), the young boy who first discovered the dragon.  He is in charge of a motley group of people holed up in an old stone castle.  Their one hope is that the Dragons will begin to die out now that the planet is reduced to a cinder and food has become so scarce.

This first 30 minutes of the movie with the introduction of the Dragons and the main characters in the castle, when it shows how they live and survive is the best and most interesting of the movie.  An alternate world is created and the film-makers are successful at drawing you into it.

It is only with the appearance of Van Zan (Matthew McConaughey), an American Marine who has flown to England because somehow he discovered that out of all the millions of Dragons in the world, there is only one male and the male lives in London, that the movie goes officially over-the-top.

Van Zan claims to be a 'dragon-slayer'.  He imparts the wisdom that during the hour of twilight when the light is dim, Dragons can't see very well and are easier to kill.  This important piece of information is imparted with such gravity and wisdom that you think it must be very important.  Except that it isn't.  None of the attacks against the dragons to come have anything to do with the time of day.  And this is just the first of the many plot-holes and inconsistencies of which the rest of the movie is full of.

The Dragons, we are told at the beginning of the movie, are undefeatable.  They even survived a Nuclear bombardment.  However, once Van Zan shows up, we learn that they can be killed by a mere javelin or a very tiny amount of explosives packed on the tip of an arrow.  If only someone had figured this out right away, the Earth need not have been destroyed!  Also we are told that Dragons eat ash.  This is why they are burning everything.  The burn a building or a field and then feast upon the ashes.  Yet in other scenes we see them eating people and even each other.

The movie climaxes with the final attack against the male dragon in London.  Three humans armed with bows and arrows hope to do what the entire population of the planet with all its military might couldn't do; end the dragon menace.  Puh-lease!!!

However, there are a couple of scenes that if you've ever been fascinated by Dragons, make this movie worth seeing.  At one point, a column of soldiers is approaching London and out of the dark, an enormous Dragon flies.  He swoops over the soldiers, holds his position and blasts them with his fire-breath.  It is the visualization of many a Dungeons & Dragons campaign.  And this scene is topped when the Dragon settles atop a flaming castle, and drapes its wings down over it.  Visually these scenes are breath-taking.  Too bad there aren't enough of them.

The post-apocalyptic world has always been a popular Science-Fiction sub-genre.  They range from the good (think Mad Max) to the truly awful (think The Postman).  Reign of Fire falls somewhere in between. 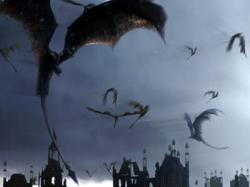 Back before today's amazing computer generated graphics movies had to rely on plot devices and character development to convey tension and horror. When these things are done well enough unrealistic looking special effects can be overlooked. Jaws and The Wizard of Oz are two examples of movies that, although considered cutting edge at the time of their release, now seem cheesy and antiquated visually speaking. They are both rightfully considered masterpieces however because they live up to and even surpass our imaginations. Unfortunately the opposite is not true. Visuals and special effects, no matter how awe inspiring, can never make up for outlandish storylines and stupid characters.

Reign of Fire proves my theory.

When I saw the preview my imagination began gleefully picturing how great, with today's technology, this movie could be. There are, after all, almost no limits on what can be perfectly visualized on the screen and the concept of flying, fire-breathing dragons seems like an idea whose time has come. This movie ain't it.

Fans of the WWF will like this movie, for everyone else I suggest waiting for the next installment in The Lord of the Rings trilogy which just might be the perfect marriage between plot/characters and visuals/special effects ever. 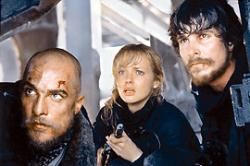 Scott bemoans the lack of a consistent plot in Reign Of Fire. Sure this movie is not hard to follow. It is more special effects than dialogue, but I wonder how well my brother was actually paying attention when he watched it.

Scott wrote that the movie explained that the dragons were undefeatable. That they survived nuclear attacks. That he found inconsistency in the fact that they could be killed by a "mere javelin". What in fact is explained in the movie is that many dragons were killed in nuclear attacks. It is just that the nuclear attacks helped the dragons in destroying the earth. He also complained that Van Zan just happened to know about the one male dragon. If Scott had been paying attention he would have heard a conversation where he explains how his group has killed over 200 dragons and none were male. The movie has several scenes where it shows headlines from magazines and newspapers. Considering that the first dragon appeared in London and the dragons that have all been killed are female it really was not a difficult guess to assume the one male was in London.

Scott also wrote that the wisdom of attacking a dragon at twilight is never mentioned again after it is first imparted. Again, Scott is wrong. Christian Bale's character says they can attack the dragon at twilight or "magic hour", as he says in the movie. Referring of course to the wisdom shared earlier by Van Zan.

Now, just because I disagree with Scott on the inaccuracies in his review does not mean that I care at all for this movie. The effects are good and Christian Bale plays it all so straight and well that he nearly saved this movie for me. However, his good acting could not over come the lousy acting of Matthew McConaughey.

McConaughey is decent as the sensitive southern lawyer in A Time To Kill. He is good as the indecisive Executive Officer in U571. Playing a balls out, hard ass is too much of a stretch for him. I think he or the director realized this so subsequently he has a shaved head and a goatee. Hey Matt, just because you make yourself look ugly doesn't necessarily make you look tough. Leave the tough guy roles for actors who can pull it off and stick to the insecure characters you do like a natural.

Honestly, if it wasn't for his stereotypical, order barking marine, characterless character, I would have liked this movie a whole lot better. Christian Bale plays the role that McConaughey should have played. Not that Bale does a bad job, it is just that it is the more sensitive, McConaughey type role.

Better casting and acting could have definitely helped this movie out. The special effects and action are there but without a good plot or decent characters you really are not left with much.