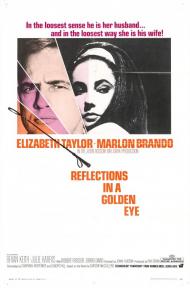 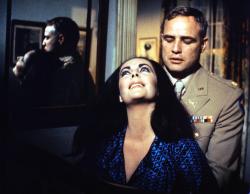 Elizabeth Taylor and Marlon Brando in Reflections in a Golden Eye.

Reflections in a Golden Eye is one of the most disappointing movies ever made. Directed by John Huston and produced by Ray Stark it is the only celluloid pairing of Marlon Brando and Elizabeth Taylor. Too bad it's one of the worst movies any of the four of them was ever connected to.

What little plot there is concerns a Major Penderton (Brando) and his neglected wife (Taylor). He's tormented by secret homosexual desires, she's a lusty woman desperate for the love and passion she doesn't get from her spouse. They live on a military base in the South during peacetime. Brando has an affected southern accent. Both he and Taylor were nearing the end of their physical movie star beauty.

The movie ends abruptly when the major barges into his wife's bedroom and shoots the soldier - the object of his shameful lust - who was hiding there ogling her. The camera pans quickly back and forth from the dead body to Liz to Brando and back again several times. Visually interesting, but so what?

I can only hope the novel on which it was based is more entertaining than this crap. I suppose for 1967 the subject matter was controversial; unfortunately the script manages the difficult task of being bizarre and boring at the same time. Brando took over the role that was originally planned for Monty Clift, who died shortly before filming began.

What a missed opportunity this movie was. What promised to be a groundbreaking teaming of two legendary stars with a legendary director turned out to be a cinematic embarrassment for all involved.

Yes, the idea that Marlon Brando and Elizabeth Taylor are sharing the same screen is enticing. Both have explosive screen personas and I looked forward to seeing what kind of sparks and heat they could generate. Unfortunately, as Patrick wrote, their pairing is an utter disappointment.

As much as I like Marlon Brando, and who doesn't, Montgomery Clift was a much better casting choice. Not only did he and Taylor have a shared history and chemistry, the fact that he was a closeted homosexual would have added an additional layer to his performance as the repressed Major Weldon Penderton. Brando employs, as Patrick mentioned, a accent that does not do him any favors. During one of his first scenes, where he is instructing a classroom of servicemen, I struggled to understand half ofthe words coming out of his mouth.

The movie centers on some screwed up people. Penderton is married, for some unexplained reason, to Leonora, a woman with sexual desires that he has no interest in even trying to satisfy. Leonora not only seeks sexual satisfaction from the neighbor but rubs Penderton's lack of sexual interest in his face. In one of many bizarre scenes, Leonora calls him "prissy" and then takes off all of her clothes. She walks about and then upstairs for him to see. It angers him to no end and he threatens bodily harm. Does she know he is gay or not? If she doesn't then she is acting like a bitch as she enjoys pissing him off. If she does know then he is a bitch for not laughing at her efforts.

During Taylor's, or her body double's, brief nude scene, Private Williams watches from outside their home. He is one of those quiet types that you just know is capable of doing something weird. He becomes obsessed with Leonora and sneaks nightly into her bedroom to watch her sleep and sniff her clothes. Major Penderton sleeps in another room.

The triangle becomes even weirder when Major Penderton becomes obsessed with Private Williams. He goes riding in the woods hoping to catch Williams naked, and does. He follows Williams on base from a distance that allows Williams to know he is being followed but not enough to stop and have a conversation.

As progressive as this movie was for the time, showing skin and swearing, it needed to be more blunt. In one scene, a soldier informs another that Williams is a virgin and was raised to think women were dirty. Is that it? Is that supposed to explain the reason he rides horses butt ass naked and stares at Leonora while she sleeps? Penderton is gay but his big outlet is a photograph of a classical naked male statue. Then there is the big clue that he is gay when we discover that he stole an old ladies spoon and polishes it when looking at the photo.

The presence of Leonora's lover, Lt. Col. Morris Langdon, provides an interesting possibility. He is married to a woman who has absolutely no interest in sex. While he has an affair of the crotch with Leonora, she is having an affair of the heart with her gay house boy. Thus we are presented with a possible wife swapping scenario. Wouldn't Penderton and Langdon, as well as their spouses, be happier with the other's spouse.

Alas, Reflections in a Golden Eye is not about happy endings but art, or at least the attempt at it. I watched the version that was only briefly shown in theaters, that had washed out colors and a gold hue. It was how Houston wanted it to look but it was quickly pulled and replaced by regular colored versions. Since the color scheme does not rewrite the script, I do not see how either could be better or worse.