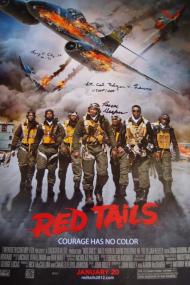 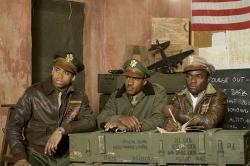 Red Tails represents a labor of love for George Lucas. He originally began developing the idea way back in 1988 but was unable to secure any major studio interest. He eventually spent nearly 100 million dollars of his own money in the production and promotion of it. The end result is an old-fashioned, uplifting war movie. Red Tails is based on the actual exploits of the Tuskegee Airmen, the first African-American pilots to fly combat missions.

I’ll begin by saying the script is hokey and platitudinous (but hey, it was co-written by Lucas after all. FYI, this is his first writing credit since Radioland Murders not to be associated with either Star Wars or Indiana Jones). The characters are all familiar clichés and every plot device is foreseeable from a mile away. It’s clear that Anthony Hemingway is a rookie director. The story, minus the fact that these are black airman, is completely unoriginal. Some of the acting is amateurish and the action scenes are all a little too convenient.

But damn it, I still enjoyed myself watching it. I saw it as that 1940s war movie with the mostly black cast that never got made. What it does have is likable characters and rousing aerial battles. It has an old-fashioned score filled with swelling strings and several patriotic cheer along moments. It doesn’t belabor the race issue or get preachy, thank goodness. It has plenty of heart and a satisfying conclusion.

The story revolves around two best friends, Easy and Lightning, both pilots. Easy is the levelheaded one who has a surreptitious drinking problem caused by vague daddy issues. Lightning is the showboating ace flyer that lives for the adrenaline rush of danger that comes with taking chances in the air. Several lesser characters round out the main group of flyboys. Subplots involving a captured pilot and an idealized romance between an Italian woman and Lightning fill out the storyline.

Most of the actors are relatively unknown. The exceptions being singer Ne-Yo and rapper Method Man along with the two big name stars Cuba Gooding Jr. and Terrence Howard (both of whom have previously played Tuskegee Airmen on film; Gooding in the made for television The Tuskegee Airmen and Howard in Hart’s War). In a sign of how quickly the years are passing, both men are now at the age to play high ranking, pencil-pushing officers. Gooding, as Major Stance, goes over mission flight plans with his men while Howard, as Colonel Bullard, spends most of the movie running interference between his pilots and the brass in Washington.

Red Tails is as predictable as war movies come but for a January release it shines brighter than most. 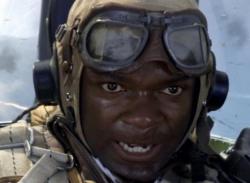 This movie does feel old fashioned and that's not just because it's a World War II movie, which have become old fashioned in and of themselves. No, this movie also feels old fashioned because it seems to have stolen much of its plot and dramatic moments directly from old movies. I suppose it's meant to be an homage in a way and sadly many young people have probably never seen the old WWII movies it's paying homage to anyway. It does mean though that I agree with you Patrick when you say that besides these pilots being black, there's nothing very original about any of it.

There's also far too much of it to go around. The best moments are when they're in the air, but far too much time is spent on the ground. The subplots involving the prison camp and even the Italian love interest should have been left on the cutting room floor.

Some of the acting is pretty bad and not just among the lesser known actors. Terrence Howard does a fine job as the Colonel, but seems too young to be referred to as "the old man". Cuba Gooding Jr. doesn't fare as well. I don't know whose idea it was for him to smoke a pipe, but he's never able to handle it convincingly and it always looks exactly like a prop that he's nervously fumbling with.

The heart of the story is the relationship between Easy and Lightning and that's where it should have stayed focused. Easy is the flight leader who can't make the hard decisions and relies on alcohol to get him through each mission. Lightning is the hot headed, hotshot pilot who thinks he knows better than anyone else. Together they somehow make it work as a team. When they're up in the air, with the rest of their squadron for added color, that's when the movie takes flight.

Patrick, as you've often been outspoken against the use of CGI, I'm surprised you didn't comment on the overuse of it here. I don't mean in the aerial dogfight scenes. There it makes sense. I'm talking about moments like the final scene where the squadron is gathered in formation on an airfield and you can tell the whole backdrop was added by computer and the actors (whichever ones of them are real) were clearly in a studio. Have we really gotten to the point where we can't even line some guys up outside without enhancing the scenes with computers?

Since this was a labor of love for George Lucas and he took so long to get it made, you'd think that he might have spent that time honing the script to perfection, but sadly that doesn't seem to be the case.

Like you Patrick, I did still enjoy large portions of this movie. It really just needed a tighter edit and someone to polish up the dialogue. 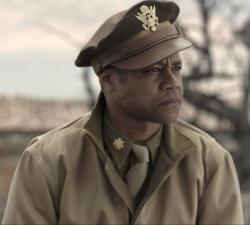 Patrick wrote that it does not belabor the race issue or get preachy.  Are you kidding Patrick?  The entire point of the film is to exploit that very subject.   After the Tuskegee Airmen's first victory, a white Colonel Mortemus says to the black Colonel Bullard, "Eight German fighters or eighty German fighters, it still doesn't change what I think of you and your boys."   Bullard looks him in the eye and responds, "We don't care."  Mortemus comes back with, "Respect the uniform."  and Bullard finishes with, "Believe me sir, that is all I have respect for."

It is not the only scene that manipulates the issue.  For some reason a black pilot walks into an officer's club.  A white officer informs him that, "This is a whites only officer's club."   While another white service man adds, "Hey, go home nigger."  The United States military was segregated in World War II.  He went there looking for the reaction he got.

The subject of the pilot's skin color and the reaction from everyone else is a constant theme of the film.  When the Tuskegee Airmen are assigned to escort a group of bombers, the white squad leader sees that the fighter pilots are all black and announces to his squadron, "I don't think our fighter escort is going to be much help this trip."  After the Tuskegee airmen defend the bombers from German fighters, the same white pilot says to his co-pilot, "We didn't lose a single plane." and the co-pilot responds, "Well that's a first."  Later the pilot adds, "We're almost home. I hope we meet up with those Red Tails next time."

Even later, that same white pilot runs into the Airmen in town and offers to buy them a drink.  When he first addresses them, the Airmen assume he is about to make trouble. They drink and bond at a bar discussing such issues as what a black man wishes to be referred to as.

If this film is not preachy, what is?  At another point, Colonel Bullard says, "We have a right to fight for our country. The same as every other American."   Of course he is right, but that line is extremely preachy.  At one point an airman says, "When you get upset, when you get mad, you turn red, right? When you get envious, or sick, you turn green. When you become cowardly, you turn yellow; and y'all got the nerve to call us colored?"  I first read that on a child's shirt about fifteen years ago.

Not only does the writing lack polish as Scott mentioned, but the direction does as well.  When the Tuskegee Airmen first encounter German fighter planes, the German squad leader announces to his squadron that the American pilots are rookies. When he says this the American planes are barely more than distant dots in the sky.  How does he know how inexperienced they are?

As a generic action story of World War II, this films works.  The dog fights and the prison sequences work as good adventure.  As a story of minorities struggling not only against an outside enemy but one from within as well, I expected some deeper conversations.  How does a man fight for a country that does not even treat him as an equal citizen?  That is a story worth exploring.  We are constantly reminded that these are black men but after watching this film, I never felt any closer to understanding their unique situation.