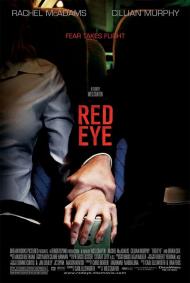 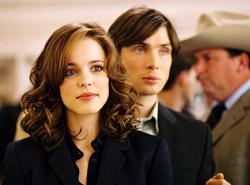 Red Eye is a case of a great setup with a lousy conclusion. It is billed as a horror/thriller. There are no scary moments and the villain is inept. What starts out so original falls apart at the end into a complete pile of cliches.

Lisa is a hotel manager flying home after attending her grandmother's funeral. In the airport and then again on the plane she bumps into a guy named Jackson Ripner, who seems nice enough. Early on they exchange some foreshadowing dialogue. Jackson explains that he does not go by Jack because then he would be Jack Ripner, as in Jack the Ripper. "That wasn't very nice of your parents." Lisa tells him. "That's what I told them before I killed them." Jackson smiles as if making a joke.

The tension starts to build at this point as Jackson informs him that she is his job. He wants her to make a phone call to her Hotel and have the visiting Secretary of Homeland Security put in a room of Jackson's chosing. Obviously it is so the Secretary can be assassinated. To insure that Lisa makes the call, Jackson informs her that he has an assassin waiting outside her father's home.

The movie meanders on this one plot device for far too long. By the film's end, all of what tension there was has evaporated with Lisa and Jackson doing battle at her father's house. Here is the movie at its weakest. When she gets off the plane she could have found security or called the police at a public phone. What does she do? She steals an SUV and tries to make a call on a cell phone, but wouldn't you just know it, the battery runs out. When she ends up fighting Jackson at her home she has ample time to run out of the house but she sticks around to fight him. A movie loses me whenever characters act completely outside the realm of normalcy.

Red Eye could have been good if it had kept the movie on the plane longer and made Jack less wussy. This guy gets his butt kicked by a girl twice. Murphy is one ugly actor who we can expect to see playing plenty of bad guys in the future. He better hope he gets better offers than this. 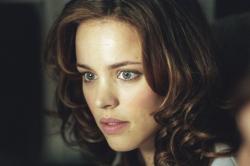 Eric is overly harsh on this movie. Yes, there are a few plot holes and the best part of the movie definitely takes place on the plane, but there is action and there is tension throughout the movie's running time and even a scattering of humor thrown in for good measure.

McAdams delivers a great performance as the hotel manager under stress with only her wits at her disposal. Her character is reminiscent of another heroine in a Wes Craven film, that of Sydney Prescott from Scream. Murphy too does a good job as the villain, as he did in Batman Begins, but as Eric said, he's really not very good at his job. Not because he gets his butt kicked by a girl as Eric points out, but rather because there had to be a better way of getting the job done than this overly complicated method.

The jokes, although they are few and far between, also help enliven the film. Cynthia, the assistant hotel manager is good for a few laughs as is the stewardess who, under the impression that McAdams and Murphy have just had sex in the plane bathroom, intones, "Trash" to Murphy in both an accusatory and questioning tone as she holds the bag for the remains of their snack.

So long as you don't spend too much time thinking about the reasoning behind the villain's plans, Red Eye is an enjoyable thriller that will, at the very least, have you looking with suspicion at the next person who sits beside you on an airplane.