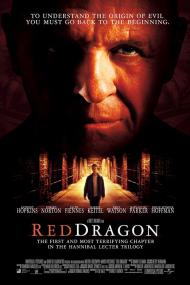 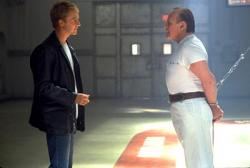 Hannibal Lecter was voted AFI's greatest villain. Calling a villain 'great' is a bit disturbing, especially when they are as creepy and evil as Lecter. Unlike the over the top Darth Vader or Freddie Kruger, Lecter is scarey because he can appear so normal when he desires. In the next moment he can discuss eating human body parts as if he were discussing a recipe for chocolate chip cookies.

In Red Dragon we see how he ended up in the prison that Clarice Starling first finds him. The always effective, Ed Norton plays FBI agent Will Graham. Graham is the agent who barely survived an attack by Lecter and was responsible for capturing him. Graham is called out of an early retirement to help hunt down a serial killer known as 'The Tooth Fairy.' Of course Graham ends up in front of Lecter's cell asking for help.

Anthony Hopkins has been making films for decades. He did supporting work opposite Peter O'Toole and Katherine Hepburn in The Lion In Winter in 1968. He has done Shakespeare and Merchant Ivory. He will, however, be forever remembered as Hannibal Lecter. His extremely subdued mannerisms and ghostly stares are for more scary than any shot of Jason chasing down some high school slut or Freddy Kruger haunting some teen's dreams. Lecter is intelligent yet doesn't mind getting his hands dirty.

Red Dragon is as creepy and eery as Silence Of The Lambs. Ralph Fiennes plays a killer who likes to slaughter entire family's then prop the corpses up with mirrors over their eyes as he has sex with the mother. The movie, thankfully, does not actually show this unfold. It is described by Graham as he walks through the victim's blood stained house.

The one thing Silence Of The Lambs has over Red Dragon is Jodi Foster's vulnerable agent Starling. Norton's Graham has already captured Lecter, so you never get the sense that he can be out smarted by him. In one scene Lecter asks Graham how he bested him. Graham replies that he won because Lecter has weaknesses. Lecter looks inquisitively at Graham, who explains to him that, 'Your insane!' Has there ever been a greater understatement spoken on film?