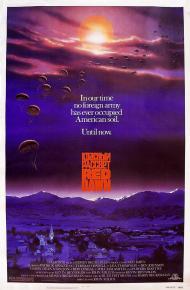 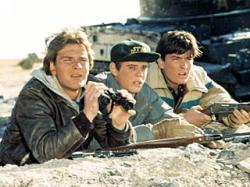 When I first saw Red Dawn, I thought it was the most exciting action film ever made. Being close to the age of the main characters, I got caught up in it all. This cold war fantasy film was a real hit when it came out and I found myself thoroughly taken in. Watching it now, I find it to be a melodramatic cold war artifact!

Red Dawn focuses on a small group of high schoolers after World War III starts. One day at school, paratroopers drop from the sky and begin shooting teachers and students at random. Why a small mid western town is an important objective is never fully explained. A group of teenagers collect equipment from a sporting goods store and race up to the mountainous forest to hide.

The filmmakers took the story incredibly serious. Early on, three of the boys, including brothers Jed and Matt, sneak back into town to see what has happened. They find their dad behind a fence in what is called a re-education camp in which propaganda such as, "America is a whorehouse... where the revolutionary ideals of your forefathers... are corrupted and sold in alleys by vendors of capitalism... " can be heard over loud speaker. The boys cry like babies over their situation and when they walk away their dad yells to them with all earnestness, "Avenge me, AVENGE ME!"

The boys are joined by a couple of girls who some Russians tried to have their way with. One day, some Russian soldiers are out sightseeing in the mountains when they encounter the American youths. A gun fight ensues with the Russians being killed. The Russian General does not take kindly to this and slaughters a dozen townsfolk, including the boys father. Matt just happens to witness it. Back at their mountain camp they all again cry like little girls until big brother Jed yells, "Don't cry! let it turn to something else."

The group become guerilla fighters attacking the Russians whenever they can. The lesson being that the Russians should have not attack the Midwest. Those states have guns. They should have attacked the coasts. Those liberal states would have been easy. The only civilians who have guns there are the criminals.

When I first saw this film I did not see all the politics, but they are clear to me now. When the Russian army arrives in town, the general orders that the gun shops be raided and their files gone through to find out who all has bought a gun. I guess it is better to own an unlicensed gun. At one point the group is joined by a downed American fighter pilot who explains what has happened. This includes the news that soldiers first came across the border as illegal aliens from Mexico. Damn illegals!

Made in 1984, with Ronald Reagan in the White House, Red Dawn has a clearly conservative God bless American slant. When the Russians line up the Americans to shoot in retaliation, they all sing the U.S. national anthem until silenced by a bullet. I am as patriotic as they come but this film is way over-the-top. John Milius is a noted conservative and NRA member, and it shows. With a remake about to come out, and a socialist in the White House, I wonder how it will be changed.

The cast is packed with famous familiar faces of the 1980s. All of them overact as badly as they can. Patrick Swayze is the star and seems to be in over his head during the dramatic scenes. This was Charlie Sheen's film debut and it shows. Both actors would work again with co-star Jennifer Grey in better films, Ferris Bueller's Day Off (1986) and Dirty Dancing (1987). Lea Thompson was a year shy of Back to the Future fame.

Red Dawn feels like it is from another time and place. The guerrilla fighting seem like that of the resistance fighters in Europe during World War II. In fact, at one point, they are listening to a radio in which the announcer is sending codes, which includes the line, "John has a long mustache." That line was used in The Longest Day (1962), for the same purpose. If only this movie was half as good as that classic war film.

Compared to the atrocious remake this movie is a masterpiece. It's an old fashioned John Wayne type war movie with a 1980s twist. Sure it's a Cold War relic but it's still one hell of a movie. The shot of Russian paratroopers landing outside those classroom windows remains brilliant, even if it lacks the shock value it originally had. It comes just a few minutes into the movie and sets off the unlikely plot in as realistic a manner as possible. Yes, it's implausible but again compared to the abominable remake it's practically cinéma-vérité. Sure the story takes itself very seriously but then war is a serious subject.

As Eric mentioned, the cast, lead by Patrick Swayze, is filled with fresh faces that would soon become famous. While none of them give Oscar caliber performances they are all up to the challenge. All of them went through an intense military training course to prepare. My favorite character is played by Powers Boothe. He plays the downed American fighter pilot my brother wrote about. He's a 1940s war hero dropped into the middle of the Reagan years. Another, far more subtle, reference to WWII is the flag seen in the classroom at the beginning of the movie. It has just 48 stars. Another nod to the era is the movie being shown to the American prisoners, as well as at the local movie theater after the Russian invasion. It is Sergei Eisenstein's anti-Nazi masterpiece Alexander Nevsky.

Red Dawn made headlines (and the Guinness Book of World Records) for its abundance of violent acts. With 134 acts of violence per hour it was deemed the most violent film ever made up to that time. The DVD acknowledges this with a “carnage counter” that can be turned on that keeps a running body count tally on the screen. Of course it has long since been exceeded by many other more violent movies and today Red Dawn plays like the old fashioned war picture it is.

Sure the setup is farfetched but the execution is not. The tanks, planes, and rifles used are all precise replicas of the real thing. The battle scenes were staged and shot in a believable manner by director John Milius. The main criticism of the film has come from reviewers turned off by its blatant pro-gun attitude and excessive violence. Despite the fantasy (nightmare) element of high school kids as soldiers, Red Dawn takes an honest look at war. It creates a scenario where the only alternative to fighting is surrender. These kids choose to fight.

Rather than glorify war, Red Dawn takes an unflinching look at the horrors of armed conflict. Just look at the high price these characters pay for peace. Red Dawn may be dated but it's still an iconic American war movie. 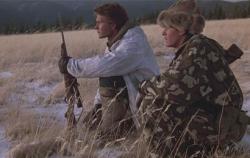 Although I've yet to see the 2012 remake, it would have to be the worst movie ever made to make this one look like a masterpiece. Although there's an interesting premise at its heart, the poor writing and even poorer acting means that the premise is never properly executed and the result is downright amateurish. It's as though a local gun club, with no previous filmmaking experience, was given a few millions dollars to go make a movie, or like some really bad alternate history fan fiction that you might find online in some NRA forum.

I agree that there's an outdated feel to the story that goes far beyond its 1980s time period. The idea that the USSR and the USA could still engage in an old fashioned land war in the age of nuclear weapons seems almost quaint. There's some brief dialogue about the Russians taking out all of America's nuclear silos, but with litlte explanation as to how this was accomplished so completely, and no mention is made of nuclear submarines. It feels more like World War II set in America rather than World War III.

Like Eric, I found the acting to be quite bad, although given the dialogue they are given, it would take far more talented actors than these to make them sound convincing. Patrick Swayze is at his best when staring off into the horizon with a serious expression on his face. The young cast is also called upon to cry a great deal. Something they accomplish by hiding their faces and making whimpering noises, although perhaps they're really trying to hide their laughter at the silliness of it all. It's difficult to tell.

The real problem though, is the script. The dialogue is poor. The characterization is paper thin. And the premise poorly thought out. It may have struck a chord during the paranoia of the Cold War 1980s, but without that extra edge it just doesn't stand up to scrutiny. It really does play out like an NRA fantasy.

Some of the action is well filmed and although for the first half the Wolverines seem a little too indestructable, the second half doesn't stint on the deaths. The violence caused Red Dawn to be the very first film to be released with the newly created PG-13 rating.

I have heard many people proclaim their love of this film. Many were vocal about it when news of the remake emerged. I'm sure there are some who are truly fans of it, but I wonder how much of the good opinion isn't simply the memory of it viewed through the prism of nostalgia. 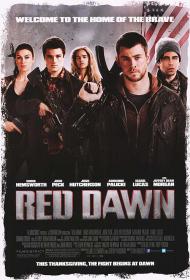