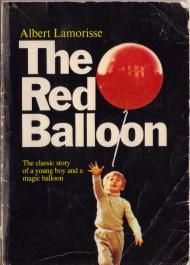 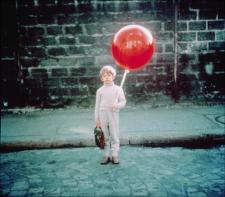 A boy and his balloon.

The Red Balloon is a wonderful children’s fantasy made in 1956. It runs only 34 minutes but is a whimsical, magical half-hour of entertainment. It won all kinds of awards from film festivals around the globe, including - incredibly enough - the Academy Award for Best Original Screenplay. Remarkable for a live-action short with only a few lines of spoken dialogue all of which are spoken in French.

A little boy discovers a large red balloon tied to a lamp-post on the streets of Paris while walking to school. He climbs up and unties the balloon and thus begins a unique cinematic friendship. The boy soon discovers his balloon is magical. It follows him around and they have small adventures together on the beautiful old streets of Paris. The balloon goes to school with the boy and gets him in trouble.

Some neighborhood boys jealously steal the balloon away. The little boy is able to get his friend back and manages to outrun the other boys and get safely home. The next day the little boy tells his balloon to wait outside of a pastry shop while he goes in to get something sweet to eat. The jealous boys take this opportunity to kidnap the balloon. Once again the boy is able to retrieve his friend but the other boys chase him through the narrow back alleys of Paris and eventually regain control of the balloon.

The boys attack the little boy and he tells his balloon to “Fly Away”. Bravely the Red Balloon refuses to obey and is hit by a rock from a sling shot. The balloon slowly dies by losing air and floating to the ground where one of the boys cruelly steps on it. Suddenly dozens of balloons from all over Paris fly out of children’s hands and out of stores and up to where the little boy sits with his dead balloon. The final shot is the little boy getting a magical flight over Paris, carried by the dozens of multicolored balloons.

This simple movie beautifully illustrates innocence, then innocence lost, and finally innocence triumphant. It is truly a work of art. 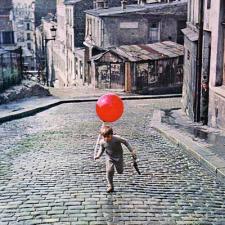 A boy running with his best friend.

The balloon is not so much magical as it is alive. The boy rescues the balloon from being caught on a post and the balloon then becomes his friend. They share a couple of days playing and getting into mischief. The red balloon even gets a chance to flirt with a little girls blue balloon. At the end when it deflates it dies.

I am sure many art folk can debate about what the balloon and it’s relationship with the boy symbolizes. I do not see any symbolism other than what Patrick wrote, childhood innocence. This mundane object attracts the boys attention and he cherishes it dearly. Notice that his world is very drab. The boy, and most of his friends, favor gray colored clothes. His world is almost completely earth toned. The colors of the balloons are extremely attractive. As an adult I would have certainly been struck by it’s brightness had I seen it on a post. However, only a child would do something so whimsical as to take the time to pull it down and keep it with him.

The Red Balloon is truly a magical piece of feel good imagery.

Thanks to an inexpensive distribution deal that was worked out with the production company, copies of this wonderful short were purchased for nearly every elementary school in the United States in the 1960s and 1970s. I can still remember, nearly 40 years later, being shown a copy of it in the library of Greenwood Elementary. I thought it was a magical story then and I still do today.

As Eric wrote, it's easy to see symbolism in the Red Balloon if you watch it with your grown-up eyes. The balloon could represent so many things, like love, religion, or even Christ himself. However, to over analyze this film is to miss the point. It needs to be watched with the eyes of a child and with a sense of wonder. To a child, the balloon only represents one thing and that is a magical and special friend. And who, child or grown-up, can't help but feel joy at the wonderful and joyous ending of this delightful and timeless film

Since 2010, there has been a high-definition version available and the clarity of this new print is amazing. It is so crisp and clear that it looks virtually brand new. We've written often on this site about how older movies can be a window into the past. Too often though, older movies were filmed on soundstages and sets. However, this movie, particularly in HD, is truly a window into Paris of 1957. The drabness of the city that Eric pointed out was no doubt caused by the still lingering aftereffects of World War II. While America was prospering during a Golden Age in the 1950s, Europe was still slowly recovering and rebuilding and you can see evidence of bombed out buildings and empty lots.

Never has a movie so perfectly captured the feel of a classic children's book. Like Where the Wild Things Are and Harold and the Purple Crayon, this story will live forever.