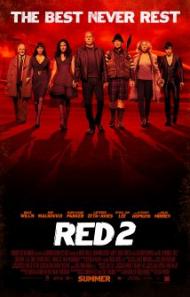 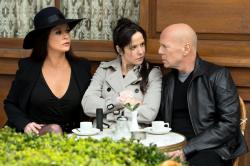 Hollywood's chronic case of sequelitis rages on. Of all the sequels released this summer, Red 2 was the one I was most looking forward to. I thoroughly enjoyed the first movie and liked the idea of revisiting these characters. Bruce Willis, John Malkovich, Mary-Louise Parker, Helen Mirren, and Brian Cox all reprise their roles from the first movie with Anthony Hopkins and Catherine Zeta-Jones joining the fun this time around. Sadly Ernest Borgnine, who had planned on returning for this movie, passed away in July, 2012 at the age of 95, just a few months before shooting was scheduled to begin.

The plot concerns a lost Cold War era nuclear bomb (designed by a mad genius scientist played to the hilt by Hopkins) that both Frank and Marvin were assigned to guard back in 1979 while on assignment in Moscow. Now with a hit out on both of their lives they must find the bomb and clear their names while avoiding being killed.

All of this is really just an excuse to get these old characters back in action together. The mix of geezer gun-play and silly humor remains as potent as the first movie although, like all sequels, it doesn't feel quite as fresh this time around.

Mary-Louise Parker provides plenty of laughs as the in-over-her-head girlfriend. She goes toe-to-toe with the also hyphenated Zeta-Jones, who's playing a Russian agent and ex-lover of Franks. As Marvin explains it, “she is Frank's Kryptonite.” Another of the funniest moments comes when Helen Mirren spoofs her own career and plays crazy by acting like she thinks she's the Queen of England. (This is to allow them to break into a mental hospital where Anthony Hopkins is locked up.) She later proudly proclaims that she felt like she was channeling Bette Davis.

Anthony Hopkins steals his scenes as the crazy-like-a-fox rogue scientist. As he has proven on more than one occasion he makes a great villain and this is his best part in years. He can still deliver a line in that inimitable manner of his and that perpetual twinkle in his eyes is still there after all these decades.

Red 2 doesn't break any new ground but it does provide breezy entertainment while providing work for actors either entering or well into their twilight years. 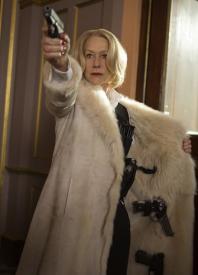 From the original Star Trek cast to Sean Connery as James Bond, I have always felt that aging action stars have too often gotten raw deals. As The Expendables and Red film series have proven, someone’s age matters little in the action genre. After all, movie magic (direction, editing and CGI) can make anyone seem as athletic and dangerous as they want them to appear.

With Red 2, the action is the center piece but it should have been spaced out a bit more to allow for more interaction among from cast. No movie series thrives on the action alone. We must want to revisit the characters, for without them all is for not.

Moses and Sarah have an interesting dynamic to their relationship. As a retired CIA agent who still attracts dangerous people to him, he must spend a great deal of time trying to put Sarah in as safe an atmosphere as possible. However, what attracts Sarah to Moses is his dangerous lifestyle. The more he tries to protect the woman he loves the more bored she gets with him.

Patrick mentioned the competitive nature between the plain Sarah and the exotic Katja. They are two very different Queen Bees who each want the same worker bee to pollinate their garden. My favorite bit is when mild mannered Sarah tries her hand at a car chase in Paris. She does not do an entirely bad job but she is no match for Katja’s training and experience. Zeta-Jones and Willis revisit my favorite action move from the first film only here Willis enters a moving car instead of exiting it.

I have never been a big John Malkovich fan but he can do great things in a comedic role. As Marvin he steals many scenes. “What happens in the Kremlin stays in the Kremlin!” He always seems to be one step ahead of everyone else. Marvin is kind of like an American Doctor Who, eccentric and almost always correct.

Helen Mirren is the hottest octogenarian I have ever seen. Okay, so she is not that old. She is actually closing in on 70 but still has the womanly curves that could set a bed on fire. With her British accent and a gun in hand, she is one hot ass grandma. To quote Marshall Mathers, “Wowsers, I just made a mess in my trousers.”

I love these characters and would love to see them get back together for a third installment. I only hope they find a more patient editor. The plot is simply a case of finding someone and then finding a bomb before it blows. However, the movie seems to want to skip along as fast as it can. One minute the characters are here and in the next they are in another country running into an old acquaintance. An ever so slightly slower pace and more banter between the leads would have raised this film to greater heights. We can find mindless action in any number of films but how often can we find such mature yet entertaining characters in action films? You are surely not going to find them in The Expendables. 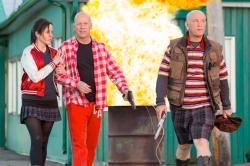 Like Patrick, I was eagerly looking forward to this sequel. The original Red was surprisingly enjoyable, featuring a cast of likable elderly actors in action roles. Following its financial success a sequel seemed obvious, but it took three years for it to finally arrive. Sadly and perhaps inevitably, it doesn't quite live up to its predecessor. The cast remains as likable as ever, but the writing feels lazy.

The charm of the film rests squarely on the shoulders of its experienced and talented cast. These actors, with well over 200 years combined life experience between them bring charm and a believable camaraderie. Normally a movie is lucky to feature one scene-stealer, but in this film the entire cast is filled with scene-stealers, each given their chance to shine, with Willis the closest thing the film has to a straight man.

As Eric wrote, the interaction between the cast is more entertaining than the action they perform. The action that works best is the highly stylized action such as the slow-mo car entrance and Helen Mirren firing two guns, each out of a different car window, also in slow motion. Perhaps it was felt that because Red 2 was being released in the Summer, where Red was released in the fall, that it had to contain more action than its predecessor, but if so, the creators were mistaken and I vote for an Autumn release for Red 3.

In May, it was reported that the script for a third film was already in the works. So long as they can reunite the same core cast and possibly bring in a few new actors (personally, I'm still waiting for Mickey Rooney to show up as Bruce Willis's grandfather), then I'm sure the movie will be enjoyable, but it'd be nice if the plot was a little more clever and a little less explosions. 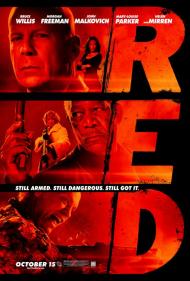