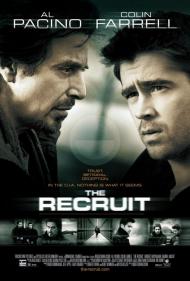 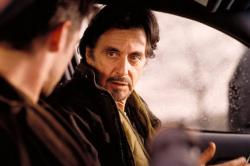 Al Pacino in The Recruit.

The Recruit is one of those movies that manage to entertain on the surface as long as one is willing to not scratch underneath for any signs of intelligence. Colin Farrell plays James Clayton, a young man recruited to the CIA by aging agent Walter Burke (Al Pacino with big hair, hamming it up every step of the way). You see his father died mysteriously in 1990 while working as a covert agent for the U.S. government and James assumes that Burke worked with, or at least knew, his father. As it turns out none of this is really pertinent to the plot but it gives James a motive for abandoning a more lucrative career with Dell and enduring the rigorous training at the CIA's facility known as 'The Farm'.

Once there he meets, and is immediately attracted to, fellow trainee Layla (Bridget Moynahan). They flirt with each other and form a bond, of sorts; all the while Burke is bombastically and incessantly reminding them "Everything is a test."

The first half of the movie is the more enjoyable. Watching the young men and women go through the intense physical and psychological training, however unrealistic and exaggerated, is engrossing. Also at this point in the story we are not really sure where everything is heading, although we have a feeling that there is a joker in the deck somewhere.

Later, when James is actually working on a mission, the story starts to fall apart. It turns into a standard thriller with the prerequisite car chase and gunplay scenes. Everything builds to a rather implausible and unsatisfactory climax.

The cast is certainly not the problem. Colin Farrell has the goods to become a major star, ditto for Bridget Moynahan and Pacino remains a riveting and powerful presence on the screen even if he seems to be playing a parody of himself these days. They should try it again with a better script and different director at the helm. 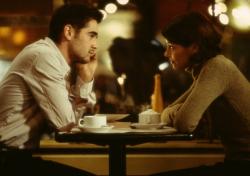 The Recruit is a better movie than Patrick would have you believe. I found it entertaining and sometimes even exciting. This is one of those movies that you constantly wonder who has a secret and when will it come out. However, as Patrick wrote, there are some plot problems.

The first problem is that I felt no chemistry between James and Layla. They flirt with each other. They each make it clear that they want to get naked with the other. When has that ever constituted love?. They never have any sort of sincere conversation. Later in the movie, James gets all serious and contemplative when it is suggested that Layla is a mole. Near the end of the movie he is willing to sacrifice his career for her. I got the lust part, but when exactly did these two fall in love?

If you don't want the plot ruined, then read no further.

The second big plot hole is that Walter pretty much hires James to catch him. Walter is setting James up to take the fall. It makes no sense to have Walter tell James to follow the mole and find out who she is giving the info to when Walter is the recipient. Didn't this genius ever think that maybe he would actually do his job and find out the truth?

I watched this movie with full-excited attention. I noticed James bluffing at poker. It was foreshadowing for a scene later where he bluffs his way out of a life-threatening situation. It was just too bad the writer didn't pay better attention, because like Patrick, I thought the ending was weak.

One of the bright spots in this movie is Farrell's performance. He is either growing on me or he has gotten better at acting. He has come along way since his bland performance in Hart's War. His reactions to everything stole my attention. His performance was better than the movie required. 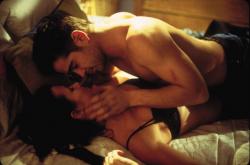 Actually, I think Patrick summed up this movie's strengths and weaknesses pretty well. The first half is definitely the best and completely loses its way after it moves beyond the CIA training facility.

Like Eric, I fail to understand why Burke needed Clayton at all. If Layla was bringing out the pieces of the Ice-9 project because she believed she was testing the security at Langely, then what was the point of putting Clayton on to her? Once all the pieces were out, wouldn't a discreet break-in into her apartment have achieved the same purpose, without all the risk?

And what about the agent who is killed by Clayton? He seems to be forgotten about by the end of the film, as does the fact that Clayton was a complete idiot in being so obviously duped by Burke.

Perhaps the most laughable part of the film is watching Colin Farrell work on a computer. No movie ever gets it right when it comes to computers, and this movie doesn't change that. I don't know why they even bother to show the screen when someone is working on a computer in a movie. It's always the same. The actor is typing furiously on the keyboard while images and numbers whiz by on the screen in an impossible manner.

The Recruit is a so-so thriller with a much better cast than it deserves.