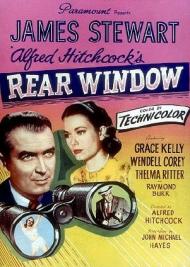 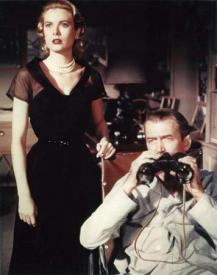 Rear Window is my favorite Alfred Hitchcock film.  It is noted for the single set and limited, yet creative camera work.  It stars the great James Stewart, the luminous Grace Kelly and the hilarious Thelma Ritter.  It contains an intriguing mystery and plenty of suspense.  Rear Window is a true Hollywood masterpiece.

Stewart plays Jeff, a world traveling photo journalist who finds himself bored in his apartment one hot summer.  He is wheelchair bound with a broken leg and has taken to watching his neighbors via the courtyard.  Because of the heat, everyone keeps their windows open.  There is the sexy young dancer, who prances around in her underwear.  There is the struggling song writer, the newly wed couple and many others.  This includes a married salesman with a bed ridden wife.  One night, Jeff notices the salesman acting strangely and his wife is missing. He becomes convinced that the salesman has murdered her.

Kelly plays Jeff's model girlfriend, Lisa.  She wants to get married, while he does not see a future for them.  Jeff tells his visiting nurse Stella, played by Ritter, "She's too perfect, she's too talented, she's too beautiful, she's too sophisticated, she's too everything but what I want."  Stella then asks, "Is, um, what you want something you can discuss?"  Ritter has some funny lines.  When Jeff calls the dancer, "a drink and be merry type of girl." Ritter remarks,  "She'll wind up a fat alcoholic."

Lisa, at first does not believe Jeff's story about his neighbor murdering his wife but eventually comes around to seeing things his way.  A story comes up that the wife went on a trip but then they discover that the wife's favorite hand bag was left in the apartment.  A clear sign that she went no where.  As Lisa explains, "A woman never goes anywhere but the hospital without packing makeup, clothes, and jewelry."

Among other things, Rear Window comments on the nature of prying into other peoples private lives.   At one point Stella says to Jeff, "We've become a race of Peeping Toms. What people ought to do is get outside their own house and look in for a change. Yes sir. How's that for a bit of homespun philosophy?"  Lt Doyle tells Jeff, "That's a secret private world your looking into out there. People do a lot of things in private they couldn't possibly explain in public."

Rear Window reaches a real level of tension when Lisa starts to act as Jeff's legs.  She leaves a note on the salesman's door.  She and Stella sneak over to dig in his garden.  Things get really good when Lisa sneaks into the salesman's apartment and he comes home and finds her there.  Jeff watches helplessly from across the yard, and that is not even the film's climax.

My only quibble is that Stewart seems more like Kelly's father than lover.  Lisa liking an old guy does not diminish the quality of this film, but why was Kelly always paired with old men?

If you have never had the pleasure of watching Rear Window, I strongly recommend you do!  Movies rarely get this good. 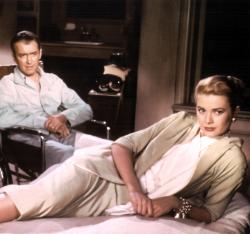 Although I tend to enjoy Hitchcock's work, he's not always my favorite director. Sometimes I find the way he sets up his shots to be interesting, but other times they just seem gimmicky like he's saying, "Look at what a cool shot this is." With Rear Window though, it's the gimmick that makes the movie. I don't know if I can say categorically that it's my favorite of his films, but it is probably the one that I've seen the most.

Eric pointed out the movie's one--I hate to say weakness, because it hardly weakens the film--let's call it 'oddity' and that is the age discrepancy between Kelly and Stewart. The odd thing is that she was 21 years younger than he was and definitely looks it, but no mention is ever made of it. Stewart's part seems to be written for a younger man. Thelma Ritter refers to him as a young man and some of his lines about not wanting to settle down or have children yet, seem to belong to a younger man rather than a man in his mid-40s. It doesn't mar the entertainment value one bit, but just one or two lines of dialogue that acknowledged the age difference would have been nice.

Having seen this movie so many times, the mystery is obviously long gone for me. It is the peek into the lives of everyone else who lives around the courtyard that makes it so rewatchable. As Eric said, it's making a point about voyeurism. Watching a movie is basically voyeurism and so here we are with this movie, voyeurs watching a voyeur. It is a private world that we look into and it's a fascinating look at these different character's lives and all their little joys and dramas.

Not that the mystery isn't good, because it is. I can still remember the first time I watched this movie and wondering what would happen. Some of the suspense remains no matter how many times you watch it, particularly when Lisa enters the salesman's apartment.

The small cast is great. Stewart is as good as always. Grace Kelly is at her most beautiful. I'm not sure anyone has ever lounged quite so well as she does here. Thelma Ritter provides some nice comic relief and Raymond Burr is appropriately sinister.

The setup for the movie is unique, with the "action" all taking place in a small apartment where for two hours we basically just watch a man watching others, but Hitchcock makes it work beautifully. It's technically perfect, but at the same time, as Eric said, it's also highly entertaining. Maybe it is my favorite Hitchcock movie after all.

The view from Rear Window.

The effective manner in which Hitchcock sets the scene is both brilliantly simple and simply brilliant. The opening shot shows three bamboo window shades rising one by one to reveal a courtyard (think curtain rising on a stage). After the interior of James Stewart's apartment is briefly shown the camera then pans back to the windows and out into the courtyard that will be the primary focus of the movie. The courtyard itself was an elaborate set that nearly filled Stage 18 at Paramount Studios.

This movie beautifully demonstrates one aspect of urban life. With so many people living in such close proximity there is a tacit understanding of privacy. Even though these folks live their lives in full view of each other they often behave as if no one can see them. The line Eric quoted by Lt. Doyle touches on this fact when he tells Jeff that he is peering into a private world. Jeff, due to boredom caused by his temporary infirmity, breaks this unspoken agreement by spying on his neighbors.

I like the fact that the screenplay is kept lighthearted even when the main characters are discussing the dismemberment of a corpse. There is a wonderful balance between humor and danger that increases as the story progresses. As Scott wrote, the ending still manages to create tension even if you have seen this movie many times.

One of the most famous shots is Grace Kelly's entrance. She is shown in closeup leaning over a dozing James Stewart. She was not only breathtakingly beautiful but also radiantly luminescent. The age difference never bothered me. Clearly Stewart is playing younger than his actual age but at any rate there is nothing particularly unusual about a man in his 40s dating a woman in her 20s.

The intimate glimpses into the lives of Jeff's neighbors are fascinating. Another detail I always enjoy is the narrow view out to the street in the lower left corner of the screen. Traffic and pedestrians pass by in a steady stream. A restaurant can be seen across the street where the desperate Miss Lonelyhearts meets the young man of her dreams who, as it turns out, is just looking for easy sex.

The real secret to Rear Window's success is the fact that, as both my brothers mentioned, it makes a statement about the voyeur in all of us. We are peeping into Jeff's life as he peers into the lives of his neighbors. We all contain a bit of morbid curiosity about other people's lives. Notice the disappointment Jeff and Lisa feel in the scene where Lt. Doyle convinces them there has been no murder. By this point they are so caught up in the mystery that they are actually let down by the fact that a neighbor lady has not been brutally murdered by her husband. Of course this turns out to be false but it says quite a bit about human nature doesn't it?

Alfred Hitchcock made so many superb films that I hesitate to call this his best work. It is, however, probably his most accessible. It has all the necessary ingredients for a classic movie. The cast, script, set, camera work, and score all come together in just the right way. By the time Raymond Burr breaks in to kill James Stewart you feel as if you are right there in that apartment with them. While Notorious remains by personal favorite Hitchcock movie Rear Window demonstrates his most audacious direction.