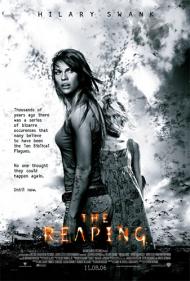 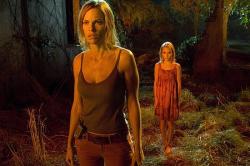 Hilary Swank and AnnaSophia Robb in The Reaping.

The Reaping is a horror movie without horror and a supernatural thriller badly in need of some thrills. In fact, except for the likeability of its lead, Hilary Swank, this movie has pretty much nothing going for it. And not even the Oscar winning talents of Swank can do anything to lift this movie out of the swamp of clichéd plot holes in which it finds itself.

Swank is Katherine, an ex-minister whose family was murdered while on a mission in Africa. Since then she's turned her back on God and spends her time debunking so-called miracles. Her endeavors have made her famous enough that when a river in Louisiana suddenly seems to turn into blood, it is her that the people of the small southern town turn to for answers, as they believe this is the beginning of the ten plagues made famous in the Bible.

The town being afflicted by the hemophiliac river is one of those stereotypical southern towns that you have to wonder even exists anymore. You know, with the fat mayor who dresses like it's the 1950s, with the old fashioned suit, horn-rimmed glasses and hat. All the women wear sun dresses and the men are either farmers in overalls or gentlemen in suits, and everybody goes to church. As a way of preventing Katherine from communicating easily with the outside world, the writers have also made Katherine's cell phone lose service as she enters the town, but not to worry, the good folks at Nextel have obviously paid good product-placement money and their walkie-talkie function still works so that Katherine can stay in contact with her assistant throughout the movie.

What plot there is in the movie is of the red herring variety. The townspeople all believe that the plagues which develop are caused by an evil little girl whose family lives out in the swamp and they want Katherine to kill her. Everything else in the story is simply smoke and mirrors designed to disguise how thin the plot really is. Undoubtedly it's also meant to scare and thrill, but manages to do neither very well. Even their sleight of hand is done poorly as it's painfully obvious from the very beginning, who is going to turn out to be evil.

Throughout it all Swank gamely plays along, thus proving that she really is an Oscar caliber actress. A lesser actress would have been unable to hide her mirth at some of the lines she has to spout and scenes she has to appear in, but not Swank. She actually makes you believe that she believes it. Forget Million Dollar Baby or Boys Don't Cry, keeping a straight face here could be the greatest achievement of her career.

And finally, as if this movie wasn't bad enough, the filmmakers, supremely confident in their work, have set up the ending for a sequel! That's right, they were actually under the impression while making this movie that people would not only enjoy this installment, but would be clamoring for more. Never underestimate the optimism of man.