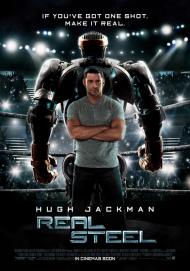 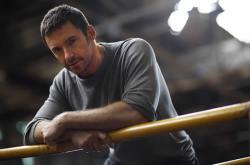 Part Rocky, part Rock 'Em Sock 'Em Robots, Real Steal is a feel good, family friendly movie that mostly works. It's a bit schmaltzy, but its heart is in the right place and thanks to a sincere performance by Hugh Jackman in the lead, it's easy to forgive its faults.

The movie is set a few decades in the future, although oddly, apart from the robots, everything, including fashion and technology, looks exactly like today. In this future, human boxing has been replaced by robot boxing, wherein two giant metal robots get into a ring and beat the crap out of each other, controlled via remote controller by their trainer.

Jackman is Charlie, a former human boxer, now a down on his luck robot boxer. He's a deadbeat dad who hasn't seen his son Max in a decade and isn't even sure how old he is. When Max's mother dies, her sister wants custody of Max, which Charlie sees as his chance to get his hands on some cash. In exchange for not putting up a custody fight, he wants a hundred grand to buy a new robot with. The only catch is that Charlie will have to look after Max for the summer while his aunt and uncle vacation in Italy.

You can probably see where the story is headed as there's nothing subtle in it at all. You're probably thinking that Charlie and Max bond and they do. When they uncover an old sparring robot and turn it into a boxer, you're probably thinking that the robot will be a success and when they introduce Zeus the champion robot boxer, you're probably going to guess that Charlie and Max's robot will get a shot at the title. Everything that happens is clearly telegraphed and neatly tied up. Since this is a family film, intended to please children and parents alike, this isn't really such a bad thing. This is a comfort food type movie. You're not watching it because you want something exotic or thought provoking.

Jackman delivers a solid and likable performance as the rated PG deadbeat dad. He's a bit gruff and selfish, but you know he has a heart under that prickly exterior. He and Dakota Goyo as Max, share a nice father/son chemistry and provide the heart of the movie. Goyo is no Tatum O'Neal and this is no Paper Moon, but he gets the job done.

Although there are several moments that suggest there's more to Max's robot Atom than meets the eye, I'm glad the filmmaker's refrained from exploring that angle. Turning Atom into Herbie the Love Bug would have made this a different movie entirely.

The big boxing finale will leave the audience feeling good, but the final match seemed fake to me. Over the course of the movie we are reminded several times just how much of a badass Zeus the robot is, but Atom is able to stand up to him fairly easily. I find it hard to believe that no other robot team had ever tried a similar fighting tactic to Charlie and Max.

With its heart on its sleeve, unabashedly sentimental script, there's an old fashioned feel to Real Steel, despite its futuristic premise. Sure it runs too long and is completely predictable, but despite its flaws it still manages to pack an entertaining punch.

Scott mentioned that Real Steel stole elements from Paper Moon and Rocky.  It's real source material seems to be another Sylvester Stallone film, Over the Top (1987).  Stallone played a cross country truck driver who ends up with his estranged son riding with him after the boy's mother dies.  They have issues at first but then, of course, bond before the end credits.  The climax of the film is an official arm wrestling competition.

Not only is this film a retread of many other plots, it also lacks real tension.  These are robots fighting, and as such we never hold our breath over the outcome of any match.  They go through three different robots in the movie any way.  When one breaks, they just get another.   We are intended to care about Charlie and Max getting together, and we do, but that outcome was established by the previews.

There are still some good things to be enjoyed here.  Real Steel is fast paced and more often than not, family friendly.  My sons liked Eminem on the soundtrack.  I liked the special effects.  The robots were particularly realistic.  Visual effects supervisor, Erik Nash, did an amazing job and has an awesome name.  If only the writers could have found some original plot angle we have not already seen so many times.

Look closely during the scene in the junkyard.  Charlie points out an original model fighting robot.  It will seem very familiar to any one who remembers Rock 'Em Sock 'Em Robots. 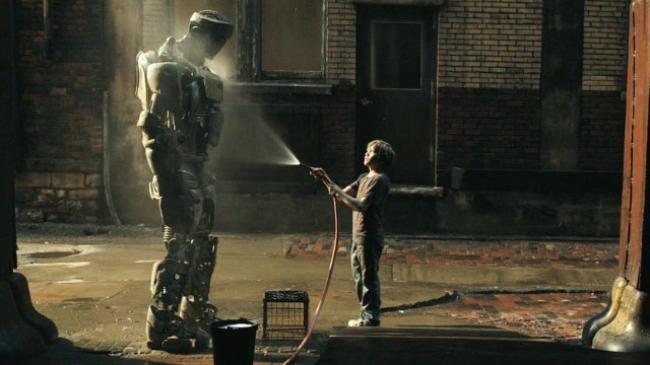 Real Steel is a sentimental story about a boy, his father and a pugilistic robot. In addition to the movies my brothers already mentioned, I was also reminded of both versions of The Champ. Like those films it's set in the world of boxing, has a central father/son relationship as well as a legal custody battle motif. I agree with Scott that Hugh Jackman gives a winning performance even though the part is quite generic.

I've never been a fan of human boxing and to be honest the idea of remote controlled robots fighting in a ring seems quite silly and pointless. The scene at the beginning at the rodeo where Charlie's robot fights a bull just seems cruel. How can a dumb animal made of flesh and bone possibly compete with human intelligence braced with steel?

If you are a kid, or can channel your inner-child, it will help get past the rather preposterous concept of professional robot boxing.

Dakota Goyo is good as the boy - although he's no Jackie Cooper or Ricky Schroder. He hits all the right notes at least but the part of Max is as cliched as everything else about the movie. Reel Steal does have decent special effects, I agree with Eric on that. They hold up pretty well nearly 4 years after its initial release, which isn't bad in the quickly and constantly improving world of motion picture CGI.

This is a strictly by the numbers father/son sports movie. It's like a throwback to those old Walt Disney family movies from 40 years ago. It has plenty of overt sentimentality and lots of robot action, if you like that sort of thing. What it lacks in originality it almost makes up for with sheer likability. It did earn enough money that a sequel is in the works.