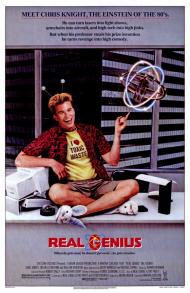 The banter between Mitch and Chris is at the heart of this movie.

Real Genius is another of my favorite movies from the 1980s. It's a silly little comedy, but one that they still show from time to time on cable television and I almost can't help but stop on whichever channel is showing it when I find it.

Val Kilmer (remember when he made comedies?) plays Chris Knight, a genius student at fictional college Pacific Tech (a thinly disguised Caltech). Despite being super smart, Chris is a bit of an eccentric, often finding himself at odds with the faculty and the more serious students. He is joined by young and earnest Mitch Taylor, a 15 year old genius who is the second youngest student to ever attend Pacific Tech. Mitch ends up rooming with Chris because as Chris puts it, "You see Mitch, I used to be you. And lately I've been missing me so I asked Dr. Hathaway if I could room with me again and he said sure." Together they're working on developing a laser that will eventually (unbeknownst to them) be used as a weapon, but that's not really important. The more important thing is the humor along the way as the two of them bond and battle wits against the slimy Dr. Hathaway and his creepy student assistant Kent.

While Mitch could technically be said to be the main character, it is Kilmer as Knight who steals the film. He gets the best lines and is just humorously charming throughout. His banter with Mitch is some of the brightest moments in the movie.
Mitch: Why does he keep going into our closet?
Chris: Why do you keep going into our closet?
Mitch: To get my clothes - but that's not why he goes in there.
Chris: Of course not, he's twice your size - your clothes would never fit him. Think before you ask these questions, Mitch. Twenty points higher than me? Thinks a big guy like that can wear his clothes?

There are other funny and memorable lines as well.
Chris: What about that time I found you naked with that bowl of Jell-O?
Kent: Look, it was hot and I was hungry, okay?

Jordan: Are you going to take me home to meet your parents?
Mitch: No.
Jordan: Why? Are you ashamed of me?
Mitch: No, them.

Like many of my favorite movies from the 80s this one features a terrific soundtrack from the era. "One Night Love Affair", "All She Wants to Do is Dance" among others and ending with that go to song of the 1980s, Tears For Fears', "Everybody Wants to Rule the World". It also features not one, but two, of those classic 1980s montage sequences!

This movie makes me feel old because when I watch it I think things like, "How come they don't make comedies like this anymore?" Sure it's very lightweight, but it makes me feel good when I watch it. And when it comes right down to it, that's how the majority of movies should make you feel.

I remember that after seeing this movie for the first time, I knew I wanted to attend Pacific Tech. Not much has changed. Watching it today almost 25 years later and I still wish I could attend.

This is one of those movies I missed when it first came out. As Scott wrote, it is an innocuously silly 80's comedy set on a college campus. Compared to many other campus comedies from that decade it is rather innocent when it comes to sex and drugs. There is no illicit drug use or nudity in sight. Perhaps this is due to the fact that the main character is only fifteen and a virgin but it does give the movie a sweetly old-fashioned feel to it.

The cast is good. I agree that Kilmer is charming and funny as Chris, sort of a young Bill Murray type role. Gabriel Jarret (whatever became of him?) is quite likable as Mitch and Michelle Meyrink is terrific as Jordan, the spastic nerdy girl Mitch falls for.

She has some of the funniest lines, which she delivers in a rapid-fire, out-of-breath fashion... “I never sleep, I don't know why. I had a roommate and I drove her nuts, I mean really nuts, they had to take her away in an ambulance and everything. But she's okay now, but she had to transfer to an easier school, but I don't know if that had anything to do with being my fault. But listen, if you ever need to talk or you need help studying just let me know, 'cause I'm just a couple doors down from you guys and I never sleep, okay?” Whew!

Real Genius is filled with funny lines. Scott mentioned several of them. Here is one of my favorite bits of dialog between Mitch and Chris.
Mitch: “You know, um, something strange happened to me this morning...”
Chris: “Was it a dream where you see yourself standing in sort of sun-god robes on a pyramid with a thousand naked women screaming and throwing little pickles at you?”
Mitch: “No...”
Chris: “Why am I the only one who has that dream?”

Even though I had never seen this movie before, it instantly took me back to the mid-80s. I graduated from high school the year Real Genius was released. The clothing, hairstyles, cars, computers and music were all as familiar and comfortable to me as my favorite bathrobe. Sure the plot is silly and the popcorn climax ridiculous, but Scott is right, they truly don't make comedies like this one anymore.

Real Genius is one of those films that I have seen parts of on television from time to time. In fact, I did not even know I had seen parts of it until something familiar came on screen, such as the ice in the hall or the popcorn scenes. Having watched it all now, I realized I have been missing a decent movie.

Real Genius certainly has its charm. The dorm where Mitch resides is filled with socially awkward college students, who do not relate very well to the rest of the world, but find a bond with the other residences. Chris is their unofficial leader, which upsets Kent, the resident douche bag, who kisses his professor's ass, who still favors Chris over him.

My brothers enjoyed the many quotable lines. They mentioned some of my favorites, but they missed this one. At a party, Chris approaches a bikini clad girl about to eat a hamburger. Chris grabs it out of her hand and says, "Don't eat that!" The girl asks, "Why?" Without missing a beat Chris replies, "Don't you know that eating that stuff can give you very large breasts?" He then looks down and says, "Oh, my God! I'm too late!" The girl in question was Lynda Wiesmeier. Her name might not ring a bell but she was Playboy Playmate of the Month for July 1982.

The biggest surprise casting for me was when I realized that Uncle Rico (Napoleon Dynamite) was living in Mitch's closet. John Gries has never made the "A" list but this guy has been acting in movies and on television since the 1970s.  He has appeared in Taken (1998) and Men in Black (1997) as well as on television's Lost. One of his first roles was in the made for television film about Charles Manson, Helter Skelter (1976). It was one of the last films directed by his father, Tom Gries. A definite passing of the family show business torch.

I was never truly concerned with the characters in Real Genius. Sure, I wanted them all to end up on top, but unlike the drug addled college students in Animal House (1978) these freakishly intelligent kids all have real futures, no matter what happens to them here. The best Real Genius has to offer are the one-liners, and it has lots of them. When Professor Hathaway scolds Chris with, "I want to see more of you around the lab." Chris comes back with, "Fine. I'll gain weight."  If you have seen any pictures of Val Kilmer recently, you will know that he meant it.