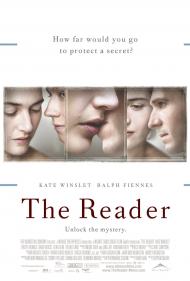 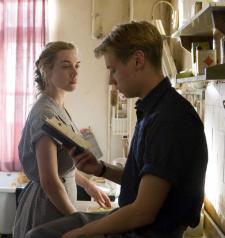 Winslet is getting all the attention, but Kross is equally good.

Yet another movie out at awards season with connections to the Holocaust. At least this year Hollywood seems intent on trying to tell the story from different angles. The Reader is more concerned with German guilt following the war than with telling the story of the war.

Fifteen year old Michael is a German student who meets Hanna, a 30-something bus conductress with whom he begins an affair over the course of one summer. He reads to her (hence the title) and they have sex. When Hanna is offered a promotion at her job however, she moves away rather than accept it and their affair ends. A few years later Michael is a law student who attends the trial of six women who were former guards at a Nazi concentration camp. He is horrified to discover that one of the women is none other than Hanna.

Winslet does her usual great job of acting and yet it surprises me that this is the role the Academy chose to nominate her for rather than Revolutionary Road as that is the more showy role. Here she is a much more controlled character and her acting is much more subtle; a style of acting that I much prefer, but is often overlooked by the Academy. I also see why this part was nominated and won the Best Supporting Actress Golden Globe, because while she does have the largest female part, David Kross and Ralph Fiennes as the younger and older versions of Michael are the real stars and have vastly more screen time than she does. All of the attention generated by the movie seems to be focused on her, but young David Kross does an excellent job as well.

This has to be one of the few major films to be released where a Nazi is presented as more than just a monster or a one-dimensional character. Hanna's actions aren't white-washed and we are told of some of the truly inhumane things she was responsible for, but the movie implies that basically she was just doing her job. This hardly excuses her actions and this movie isn't trying to do that, but in all probability the majority of Nazis were doing just that; obeying orders without questions.

The younger generation; Michael's generation, is left to deal with the cultural inheritance of the Nazis and question of who did what and what did everyone know and how do they relate to the people in the past generation who were apart of it. It's this relationship between the generations as epitomized by Michael and Hanna's relationship that is the crux of the film.

I confess that the only reason I watched this movie was because it was nominated for a Best Picture Oscar. Happily I ended up enjoying it much more than I thought I would. It's a fairly heavy movie but it moves quickly enough and keeps your attention. It's not the kind of movie you'll want to watch repeatedly, but it's entertaining enough the first time.

The Reader tackles two issues. The first is the question of the Holocaust and responsibility. There is a scene in a college lecture hall where one students asks the questions that everyone is still trying to get answered today. Did everyone in Germany know? If everyone knew, why did no one do anything about it? Although this movie is not answering for an entire nation, through Hannah, it does says that stupidity was key. Hannah was an illiterate, poor girl who was simply doing her job. When answering why she did what she did, she responds in a logistical manner, describing what, to her, is logical, although extremely heartless. She did what she was ordered to but she also never had brains enough to question the actions, she herself were carrying out.

The other issue The Reader deals with is an older woman/underage boy sexual relationship. In the United States we have had teachers give birth to babies that they conceived with a male underage student. We have had a female teacher convince her underage male student to try and kill her husband, after taking his virginity. Men often fall in love with their first sex partner. It has been written that underage girls are emotionally bothered by sex with an adult male, while underage boys are not bothered by having sex with an adult woman. The Reader begs to differ.

Michael loses his virginity to, and falls in love with, Hannah. They spend the summer together having sex and him reading to her. He loses interest in his family, friends and girls his own age. She breaks his heart when she leaves. In college he has sex with a girl, but it has none of the passion he once knew with Hannah. The movie opens with Michael and a woman he obviously has little actual affection for. Michael grows up to get married and divorced, and never again feel connected to another woman like he did Hannah. Michael is not just emotionally bothered by the affair and Hannah leaving him, his heart is scarred to the point that he can never fall in love again.

The Reader has lots of nudity. It has so much nudity that I was trying to figure out what it all symbolized. Nudity in movies can be erotic and this movie has a few of those scenes, but it also has nudity in several scenes that are not sexual. Michael gets out of bed alone and naked. Hannah swims in a bra that may as well have been taken off as the water renders it see-through. Hannah washes herself in a sink naked before going on trial. Michael skinny dips in a lake by himself. The most interesting nude scene is when a clothed Hannah washes a naked Michael. He is standing up in a tub while she goes about cleaning him as if she were washing a car and not massaging a lover.

The bathing scenes obviously represent cleansing. Is Hannah trying to clean away her past? Doe she think she tainted Michael so she had to clean him? Maybe I am reading to much into the nude scenes? Maybe the director just wanted to get his two leads butt ass naked as many times as he could? You tell me. 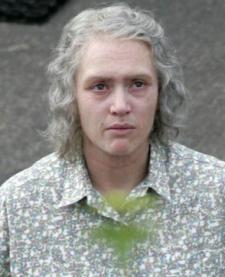 Kate Winlet as the older Hanna.

Hanna was illiterate but not stupid. She also had plenty of stubborn pride. She turns down a promotion and even takes blame for writing an incriminating report during the war rather than admit she cannot read or write. I found her to be both repulsive and pitiable. The character of Michael I found to be rather weak. As Eric mentioned he never seems to have fully recovered emotionally from his brief affair with Hanna as a teen. I enjoyed the younger Michael as played by David Kross. He was much more interesting than the rather boring middle-aged adult he turns into as Ralph Fiennes.

The acting is great. Winslet seems incapable of giving a bad performance and David Kross has a bright future ahead of him. Fiennes does a decent job in what is the least compelling part of the story.

I feel the need to nitpick one aspect of the movie. The affair between Hanna and Michael lasted for only one summer, yet in a montage we are shown Michael reading parts of many famous and long novels. There is no way he really read these books in their entirety out loud to Hanna in just a few months time. Still The Reader is a solid drama worth seeing, but like Scott I doubt I will ever watch it again.