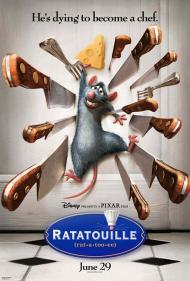 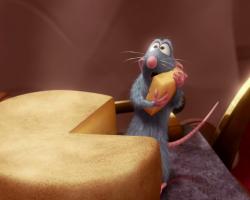 Brad Bird was so successful with The Incredibles. He took larger than life super heroes and turned them into all to human beings with quite ordinary problems as well as super ones. He also did the rare thing of showcasing an entire traditional family. In Ratatouille, he takes a common nuisance, a rat, and tries to humanize him. The plot is a nice set up, but it does not connect to the audience as well as The Incredibles did.

Remy is a rat living with his dad, as usual, only one parent is mentioned, and a whole bunch of rats in an old attic of a French farm house. They scavenge for garbage while Remy dreams of culinary delights. His brother, Emil is content to eat whatever he finds, even if he does not know what it is, "You dunno... and you're eating it?" Remy asks him. "You know, once you muscle your way past the gag reflex, all kinds of possibilities open up." Emil responds.

After being run off the farm by a gun totting old lady, and getting separated from his clan, Remy finds himself in Paris at the restaurant of his favorite, recently deceased, chef Auguste Gusteau. A new employee, Linguini, gets a job cleaning the kitchen. He and Remy soon hook up as cooking partners. Remy hides under his hat controlling how Linguini cooks. Linguini does not know that he is the bastard child of Auguste Gusteau, and that he is the heir to the restaurant.

Bird takes a few pokes at the French reputation of being rude, snobs. At one point Colette rushes Linguini away from an interview excusing her brash behavior by explaining that she's French. Another scene has Remy ask Colette to make Ratatouille. She responds that it is, "peasant food." By the way, Ratatouille is a vegetable dish consisting of eggplant, squash and tomatoes.

This movie has some good moments, but how can I bring myself to care about a rat. Rats spread the black plague. They are snake food. I don't care how passionate about cooking they make Remy, no creature covered in hair should stand over a stove or prep table. yuk! 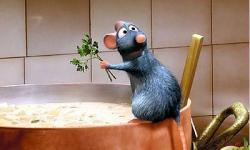 At first I thought, Eric, you were just being silly. I mean, it's a cartoon, how gross could having a rat as a chef be? But now, after seeing the movie, I kind of agree with you. I know that no matter how good a chef that rat might be, I would never eat at that restaurant. I think part of the problem is that the animators made the rats too realistic looking. This is particularly true during the scenes of multiple rats all swarming across the kitchen. It's not cute or endearing, it's actually pretty disgusting.

Beyond that though, the movie does have its charms. If you get past the yuck factor of having a rat in the kitchen, it's a nice little cartoon. It doesn't come anywhere close to Pixar's previous efforts though.

As usual for Pixar, the animation is nice to look at. They have done more than any other studio to raise computer animation to an art form. For the first time in one of their cartoons, humans play major roles. They've played minor parts in earlier films, but this is the first time they've starred. It's funny though that the rats look more realistic than the humans. The humans are all very exaggerated, almost caricatures, but the rats often times look far too real.

One odd thought struck me during the opening scenes of this movie. Am I the only one who thought the beginning, with the rats fleeing from the farm house onto boats, bore a passing resemblance to the opening scene of 28 Week's Later?

Ultimately then, I was disappointed with this movie. I expect a lot from a Pixar cartoon and this one failed to meet my expectations. It's cute at times, amusing at times, but there's no real reason to rush out and see this one at the theater. You'd do just as well watching this one on DVD.