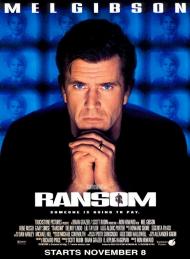 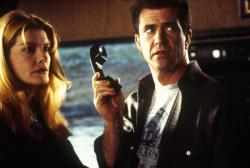 The greatest concern of any parent is to find that their child is missing.  Ransom feeds on that fear and turns it into a case of revenge.  Based on the 1956 film Ransom!, starring Glenn Ford and Donna Reed, Ransom is an engaging film with fine performances by Mel Gibson and Rene Russo.

While at a crowded Central Park event, Tom and Kate lose sight of their son Sean.  After a desperate search, he is nowhere to be found.  They receive a call and a ransom of two million dollars for his return.  They call the FBI and arrange to pay the ransom.  The drop off of the money does not go as planned as the FBI secretly followed Tom, resulting in the death of one of the kidnappers.

A second drop is scheduled but as Tom is driving to it he changes his mind.  He goes on television and announces that the two million dollars is no longer a ransom but a bounty on the heads of the kidnappers.  " ... you return my son, alive, uninjured, I'll withdraw the bounty."   This upsets the FBI, the abductors and his wife, "You paid off to save your airline. Why won't you pay off to save your son?"

Mel Gibson has been known for his looks, sense of humor, religion, drinking and anti-Semitism.  Too often he has been over looked as an actor.  Like John Wayne, you never forget that you are watching Gibson, but he always plays roles that suit his strengths.  Tom is a rich father, caught up in a media storm, with some past ethical issues.  Not really much of a stretch actually but Gibson pulls you into his world and you sympathize with Tom's difficult decision.

The initial kidnapping scene will be scary for any parent, but another one later on will stop your heart.  Tom and Kate are talking on a speaker phone to the angry kidnappers, and they hear their son's voice.  Tom yells, "You kill him, you kill yourself, you motherfucker! GIVE ME BACK MY SON!"  The kidnapper says, "You want him." and then they hear a gun shot.

Out of all of Mel Gibson's leading ladies, none share such great chemistry with him as Rene Russo.   This may be due to her age.  Most of Gibson's on screen love interests have been played by younger actresses.  Russo is actually two years older than Gibson.  You believe they are a genuine couple,  It is not at all like some gold digging young model dating a past his prime movie star, whose looks have long since been lost to alcohol and age.

Although Russo does a good job, her screen time is limited compared to Gibson's.  Although Tom is made out to be the hero, he has weaknesses and a checkered past that haunts him.  He has to accept that a decision he once made encouraged the kidnappers to snatch his son.  Gibson carries this film and no matter what you think of him, he does a good job of keeping your interest.