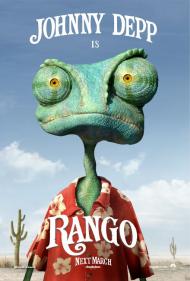 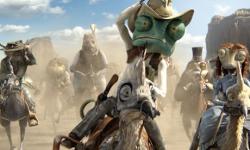 Just when I thought westerns were dead, along comes Rango.   Like Shane (1953), High Plains Drifter (1973) and even Blazing Saddles (1974), a new guy, or lizard in this case, arrives in town to save the good folk from some baddies.  The actual plot is anything but original.  It is done with animated animals, which makes it a bit unique but also a bit confusing.

The story opens with a chameleon doing a theatrical performances in a terrarium with the torso of a Barbie doll, in the back of a moving truck.  Humans can be seen driving vehicles.  After a minor accident, he gets tossed from the truck and ends up in the desert.  After getting directions from an armadillo, who has clearly been run over, the chameleon ends up in a western town called Dirt, where water is money, and money is scarce.

The town is populated by desert animals who all wear clothes, carry guns and worry about their crops.   There are no humans here, so where is he?  Where does this take place?  Do animals and humans co-exist in this movie as equally intelligent creatures?  Has he died in the accident and this is his after life?

The chameleon tells everyone, "The name's Rango."  He is made the town sheriff.  Being an actor, Rango relishes the role.  Addressing the depressed town, he points to the sheriff sign, and says "Believe in that there sign. For as long as it hangs there we've got hope."  To a child he says, "Stay in school, eat your veggies, and burn all the books that ain't Shakespeare."  Things are not that easy for Rango as he has all kinds of outlaws working against him, including a rattle snake with a Gatling gun in place of his rattle tail.

Rango makes reference to many movies.  An attack from a squadron of bats mimics the helicopter attack in Apocalypse Now.   They fly through a canyon reminiscent of the climactic Death Star scene in Star Wars.  Of course there is a showdown on main street that has been done in far too many westerns to mention.  There is even a cameo by Clint Eastwood.  Actually it is Timothy Olyphant, but you know what was intended.  He has my favorite line.  When Rango asks him, "Is this Heaven?"  He responds, "If it were, wouldn't we be eating strawberry Pop-Tarts with Kim Novak?"

Verbinski directed the first three Pirates of the Caribbean films.  Parts of Rango look surreal like the opening scene of At World's End.  Verbinski can certainly tell a story but often he is not clear and concise.  One scene has Rango and friends traveling underground and a gigantic eye opens next to them.  Nothing happens, we never find out what it was.

Rango is a film with basic cartoon plot devices like one animal running away from another.  It also has plenty of movie references that adults, who have seen plenty of films, will enjoy.  Although I wished the setting was better explained, the plot is succinct and entertaining enough to over look it. 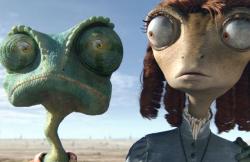 I do agree Eric that there are some discrepancies in the setting. The movie starts with Rango as a pet and later in the movie we see Las Vegas. There are also human artifacts scattered around like the water jug. But there are also animal sized manufactured items, like the guns and clothes. Even more confusingly, in one scene Beans eats an apple that fits easily in her hand, when shouldn't apples be twice her size? My theory is that the entire film takes place inside Rango's mind and I think the opening scene supports that, but really it doesn't matter at all, because none of the oddities prevent this movie from being fun and very funny.

Along with the slapstick antics (my favorite of which is when Rango is in the dress being chased by the moles on bats) and the movie references, there are also some very funny lines. "I'm gonna strip away this mystery and expose its private parts." Rango vows at one point. Around the camp fire a group of animals try to one up the other by how sic they once got. "One time I coughed up an entire tribe of pygmies. They started lookin' at me funny." says one. "I remember them! Really nice bunch of people!" replies another. "I once found a human spinal column in my fecal matter," says yet another to which the last replies, "Yeah, you should probably have that looked into."

While I'm sure kids will find plenty to laugh at, there are lots of jokes that will go right over the heads. How many children will recognize Hunter S. Thompson, for instance. Or know who Kim Novak is for that matter. The in-jokes and movie references come fast and furious. I haven't laughed this hard at a cartoon in ages.

The all-star cast does a good job voicing the characters. Depp is his usual slightly odd character as Rango. Abigail Breslin gets a few funny lines as little Priscilla and Bill Nighy makes a great western villain as the rattlesnake. Another actor who I thought did a great job as the Mexican Mariachi Band that sings about the proceedings as the movie goes along was Antonio Banderas, only when I looked  at the credits, it turns out it was George DelHoyo sounding almost identical to Banderas, instead of the real thing.

There are definitely some surreal moments in the film and those are some of the best. From the Armadillo of La Mancha who sets Rango on his quest to Clint Eastwood as the Spirit of the West (and Olyphant does a great impression) with lots of little moments in-between. It's because of these surreal moments, that any discrepancies don't really matter. This is meant to be a fable rather than a documentary.

As Rango started I was intrigued by this odd little lizard with a big imagination. I had no idea where the story was headed. Once he arrives at the dusty little town of Dirt and it turns into a Western spoof, with an assortment of small critters as the townsfolk, it lost some of its charm for me. As Eric said it isn’t exactly original and the gimmick of the characters being animals wears thin pretty quickly. At an hour and forty-five minutes the story drags in parts. I could have done without the extended action scenes.

The voice-over work is quite good with many characters imitating famous actors. My brothers already mentioned Timothy Olyphant’s Clint Eastwood but there are several others as well. One of them (I think it was a cat) does Pat Buttram, famous for playing Gene Autry’s sidekick for many years, as well as junk dealer Mr. Haney on television’s Green Acres. And Ned Beatty as the Mayor is imitating John Huston’s corrupt Noah Cross from Chinatown, which also featured a mystery involving water.

Like Eric, I found some of the characters and visuals to be a bit confusing. And I was more than ready for them to wrap things up by about the 90 minute mark. I agree that some of the dialogue is clever and definitely aimed at adults. Balthazar saying, “Thespians? That’s illegal in seven states!” and Bad Bill threatening, “I'm going to slice your face off and use it to wipe my unmentionables!” are just two examples. Unfortunately too much time is spent on silly action scenes that may amuse the kiddies but grew tiresome for me.

Rango is a quirky little animated movie with decent entertainment value. It features a talented cast of actors, but it isn’t anywhere near as clever as it thinks it is.