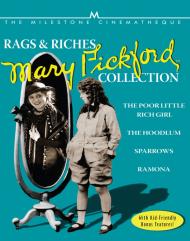 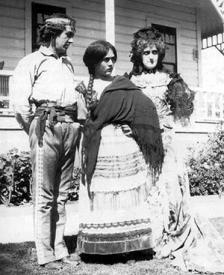 Early in 1910 D.W. Griffith, along with his actors (including Mary Pickford) and film crew from Biograph, went on a 4 month working vacation to California. From February to May of that year he shot 25 shorts in various locations throughout the state, including what is considered to be the first movie shot entirely in Hollywood, In Old California (not to be confused with Cecil B. DeMille’s The Squaw Man (1914) which was the first feature length movie shot in Hollywood). He demonstrated the states suitability for filmmaking with its abundant sunshine and variety of terrain including deserts, mountains and the sea shore.

Ramona is one movie made during this fateful trip. Griffith would return permanently to the then rural suburb of Los Angeles known as Hollywood at the beginning of 1913; Pickford would arrive later that same year right as Hollywood was becoming the movie capitol of the world.

Ramona is based on the book by Helen Hunt Jackson which was published in 1884. Griffith shot it at Camulos, Ventura County where the events in the book took place. Ramona is notable as the first movie to list its shooting locations in the credits.

The novel is condensed into a 17 minute movie. Pickford is the title character, a young girl living with her abusive stepmother in Southern California during the19th Century. Against her family and society’s rules she falls in love with an American Indian named Alessandro. They eventually run off together, get married and have a child.

The settlers attack Alessandro’s village and things don’t end well. The movie is subtitled “A Story of the White Man’s Injustice to the Indian”. I find it interesting that Griffith chose the subject of interracial love. He would later revisit this theme in Broken Blossoms with a relationship between a white girl and a Chinese man. It appears his views on race were somewhat more complex than you would think just from watching The Birth of a Nation.

Mary Pickford, in a long black wig in braids, was either given bad direction or hadn’t yet mastered the art of dramatic screen acting because she over emotes badly. To be fair it’s a close race between her and Henry B. Walthall as Alessandro to see who can overact the most. In fact, pretty much all of the acting is melodramatic even by silent movie standards.

The best things about Ramona are the many panoramic shots of the countryside. Most of the movie takes place outdoors and Griffith makes great use of the scenery. California in 1910 was a beautiful and majestic place before urban and suburban sprawl. Ramona is historically significant in setting, theme and genre but like many silent movies it is not much good as entertainment. 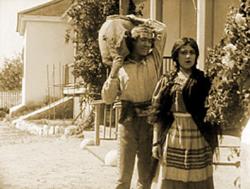 Henry B. Walthall and Mary Pickford in Ramona

Ramona is an interracial love story, sort of.  Ramona is in love with an American Indian.  Her step monster beats and condemns her when she catches them mooning over each other.  Ramona is confused by her feelings of love for this Indian.  Although she cannot deny her feelings, she believes it is wrong to feel that way.  She prays for answers.

The story wimps out when, "She learns that she herself has Indian blood."  Suddenly everything is alright.  Apparently as long as she is at least part Indian she can get with one.   The story should have been brave enough to maintain her as a white woman in love with an Indian.  Also, the famously blonde Mary Pickford should have kept her original hair color.  It would have been far more shocking to have it played as such.   As it appears on screen it simply looks like two Indians in love.   The shock value is practically nonexistent.

Patrick praised the scenic, on location shots and I agree.  They are amazing.  I especially like the shot of the mountains during the burial.  California in 1910 was practically still a wilderness.  It had only been a state for 50 years.

Also like Patrick, I was put off by the horrible over-acting.  It took a few years for directors and actors to realize that film acting did not need to be as big as stage acting.  The sunshine definitely made California a great filming locale, but as it was the only source of light for filming, Griffith needed to better stage a few scenes.  One in particular is when Pickford kneels down to pray outside.  She is in a shadow of trees and you can barely even see her.

Ramona is not daring in story or unique in technique.  The acting stinks and the direction uninspired.  Yet it remains one of so many important films that document how our world once looked. 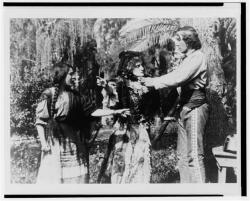 Mary Pickford, Kate Bruce and Henry B. Walthall in Ramona.

The story may go a different direction than you thought it should Eric, but I wouldn't say that it wimps out. After all, Griffith was simply following the plot of an immensely popular novel and changing Ramona's nationality would have been like Chris Columbus making Harry Potter a muggle in the first Potter film.

The acting, as you both mentioned, is some of the worst ever put on film. It is so hammy that it practically oinks. Pickford and Walthall seem to be having a competition to see who can overact the loudest and Kate Bruce as the Step Mother wants to get in on the action as well. Arms are flung this way and that and hands are wrung in a pitiful display. A blind person could see these people acting.

Along with learning how to act, they also hadn't learned what title cards should be used for. Instead of as a replacement for dialogue, here they're used like chapter headings. They describe what's about to happen thus destroying any chance of any kind of surprise.

I'll ditto the interest in the location shooting. It's the most memorable thing in the entire short.

You'd never guess that two such big names as Pickford and Griffith were attached to something so amateurish. If you ever want someone to hate silent movies, show them this one. It's filled with their worst qualities.