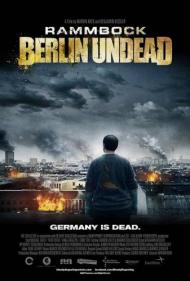 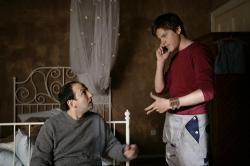 Clearly influenced by 28 Days Later.  Rammbock: Berlin Undead (also know as Siege of the Dead) features a disease in which once a person is infected they feel compelled to attack any and every non infected human around them.  The only real difference between the two film's diseases is that instead of having the infected's eyes turn red as in 28 Days Later, they turn white.

A virus, without a back story, breaks out just as Michael returns to Berlin to see his ex-girlfriend Gabi.  He arrives at her apartment as the movie starts and the rest of the film plays out there.   As Michael enters Gabi's flat he discovers she is not home.  He instead finds two plumbers.  One is infected and he attacks him and the other plumber, his teenage assistant, Harper.  Michael and Harper barricade themselves in Gabi's apartment as hordes of infected people swarm the court yard below and the building.

Across the courtyard they can see other survivors looking down and at each other in concern.  One window has a brother and sister about Harper's age.  Another has a worried looking middle aged man, while another has a big ominous looking man with a bleeding arm and an evil stare.

Michael and Harper work together, break into other apartments, get chased by the infected and do whatever they can to survive.  Michael is still curious about what happened to Gabi.  In one humorous scene Harper bends some silver forks in hopes of making a weapon but is scolded by Michael because Gabi will be upset when she sees what he did to her silverware.

Michael is a German George Kastanza.  He is short, pudgy and has the start of a bald spot.  I am amazed he was ever able to get a girlfriend in the first place.  Harper is a generic teenager with little distinctive personality traits.  His big contribution is that he discovers that bright flashing lights puts off the infected.

There are some frights to be had as those around them get killed off.  The creepiest scene is when they break into another apartment and get attacked by an infected old lady.  Harper has to take shelter on top of a tall cabinet as the old lady and other infected try to reach him.

Other than being from Germany, Rammbock:  Berlin Undead has nothing new to ad to the infected, end of the world zombie genre.  It's best aspect is the limited setting, but that was already done in Night of the Living Dead.  It could easily take place in the exact same world and time as 28 Days Later, just in a different locale.  Although completely familiar in every possible way, it only runs an hour long and no time is wasted explaining anything,  Rammbock is a scary little treat for those who like this kind of gore.