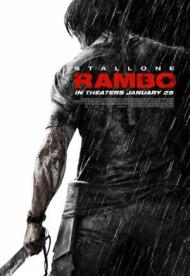 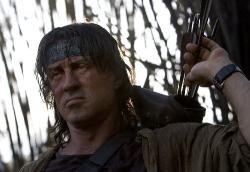 I remember a saying from a few years back that goes something like this, "Go Rambo on him." Or any variations of that. It referred to John Rambo beating the crap out of or killing a bunch of people. In the new movie, Rambo, John enforces that saying to a whole new degree.

As the movie starts, John Rambo is living a solitary life in the jungles of northern Thailand. A group of human rights missionaries search him out and ask him to guide them into Burma to deliver medical supplies. "Burma's a war zone. Its suicide." Rambo tells them. "More like genocide." The leader of the missionaries retorts. The movie spends plenty of time showing the atrocities of the world's longest running civil war. After the only girl in the group persists does he agree to take them up river.

After a run-in with some river pirates, the peaceniks learn that John is more than just a guide and want nothing more to do with him. Shortly after getting dropped off by Rambo, the aid workers are captured by the Burmese army. The sponsors of the missionaries hires a group of mercenaries to rescue them and ask Rambo to just take them to the last point he saw them. After the first fire fight, it becomes clear that Rambo is now in charge of the group. Actually he holds an arrow ready to fire inches from the mercenary leader's face and says, "Live for nothing, or die for something."

What follows are very gruesome fights as Rambo and the soldiers for hire kill countless Burmese. Not all of the good guys make it out alive either. People just don't get shot and bleed. Stallone has body parts flying in different directions. Gallons of blood splattering everywhere. Heads explode. Women get raped. Even a pedophile is thrown in for evil measure. As writer, director and star, Stallone dominates this movie, and so he should. This is a Rambo movie and we only watch it for him. He has all of the best lines, "When you're pushed, killing's as easy as breathing." The only other character that makes any impression is Schoolboy played by Matthew Marsden, no relation to James. And you only remember him because he is the one most loyal to Rambo.

The movie's only weakness is the lack of a real story arc. There is a bit of Rambo rediscovering his roots but it seems tacked on at the end. This is John Rambo and all we really ask of it is that we get to see him go Rambo on the bad guys and this film certainly delivers that.