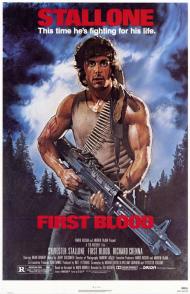 You know, wearing that flag on that jacket, looking the way you do, you're asking for trouble around here, friend.

My recollection of First Blood was that of Rambo being harassed by a small town sheriff, until he is forced to fight back. I recalled him being chased into the woods and shooting up the town, as I cheered. My memory was accurate, but I obviously did not understand it. Whereas I once thought Rambo was the hero and the sheriff the bad guy, I now see that neither is true.

John Rambo is a vagrant, walking through a small Washington town, after trying to look up an old war buddy. The sheriff subtly asks him to keep moving and even drives him through town. At first you may think that it was rude of the sheriff to force Rambo along, but the sheriff is only doing his job. Rambo comes across as a very suspicious character. He does not speak much, and has a look on his face that belongs on someone who has been using too much medication. I would certainly be leery of him if he was hanging out on my street.  Sure the ACLU could make a case that the sheriff is profiling, but to the citizens he is doing the job they pay him for.

He ignores the sheriff, walks back into town and gets arrested.  Rambo refuses to answer questions and comes across as a bit looney.  He has flashbacks and infuriates the policeman trying to book him.  It ends in a fight and Rambo runs off into the woods with the police force in pursuit.  At this point, Rambo is a criminal.  He resisted arrest, assaulted police and became a fugitive.  Sure a couple of the policemen are acting like dicks, but that does not excuses his actions.

One policeman attempts to shoot and kill Rambo, but he ends up dead.  This escalates things and the National Guard is called in to help find him.   Rambo could run off and forget this happened, but he decides to wage war on the entire town.  With a big gun in tow, he destroys businesses and shoots things up.  At this point I am not rooting for Rambo at all.  He is clearly insane and out of control.  His actions could have easily lead to many innocent deaths.  He needs to be stopped.

One scene at the end saves the character.  Cornered in the police station, and facing his old commanding officer, Rambo has an emotional break down. He cries as he describes some horrific things he experienced.  We see that he is scarred in ways people who have never experienced combat will ever understand.  For the first time in the film I truly felt sympathy for him.

Stallone is perfect in this role.  His lack of acting talent works for the stone faced Rambo.  He has few lines and his lack of facial expressions adds to his hidden misery.  I wish Dennehy had played the part of the sheriff a little more pleasantly.  By the end of the movie we see two sides to Rambo, but not the sheriff.   He is in fact just doing his job by moving along a bum.  If the movie could have supported his point of view a bit more it would have better rounded off his conflict with Rambo.

Like all Rambo movies this one has a political/social message.  Rambo is a Vietnam decorated war hero, but got no respect when he came home.  His speech at the end includes how he came home to protests of people calling him a, "baby killer!"  He did what he was told and then came home to a country where some denounced him for doing what previous generations were lauded for. This is first and foremost an action film, but it is also food for thought on how veterans need as much respect as can be afforded. 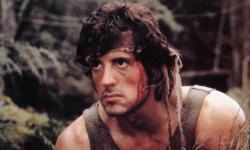 Eric, do you really want to live in a country where you're not free to enter a town if the Sheriff doesn't like the way you look?  Is that really just him doing his job?  Besides, apart from the fact that Rambo comes walking into town with a rucksack over his back, there's nothing odd about him at first glance.  Believe me, if everyone in the Pacific Northwest who walked into a town with a rucksack was kicked out, there wouldn't be much population left.  It's no wonder that Bigfoot has been spotted so often there, a large portion of the male population could be mistaken for him.  Rambo is fairly clean cut by comparison.

Having said that, could this movie have been more dramatic had the Sheriff been allowed to be more three-dimensional?  Probably.  He seems to hate Rambo with a vehemence beyond reason. They could have said that he never served, maybe he bought his way out of military service and so he resented Rambo.  Likewise the other police officers, apart from one played by a very young David Caruso, are shown to be mean and sadistic and not entirely realistic.

Clearly Rambo is mentally unbalanced and the movie doesn't shy away from that.  I don't think at any point is it trying to say that what he does is justified.  He's just taking out years of frustration on the town that picked a fight with the wrong man.

The novel upon which First Blood is based upon is reportedly more violent with Rambo killing the men who come after him.  In the movie, only one officer dies and his death is only indirectly caused by Rambo.  The book also has a much darker ending with Rambo killing himself instead of being taken into custody.  That version of the ending was filmed, but changed when test audiences found it too depressing.

I actually think the book's version of Rambo sounds better.  As you say Eric, at times the movie is trying to make you cheer on Rambo, when the real point of the character is to show that here is a man trained to kill by the Army who then set him loose into a society that didn't care about him or have any respect for what he went through.  Is it any wonder he went a little nuts?  I know that they made sequels that became increasingly cartoonish, but just going by this movie, what future does Rambo really have at the end? 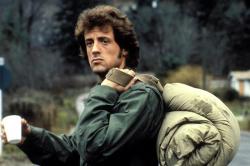 As shown in this movie the sheriff is the bad guy. The last time I checked this was still a free country and until a law is broken its citizens are free to come and go without police harassment. Small town sheriffs are not dictators with total control over who enters and exits their jurisdiction. John Rambo, as a citizen of the United States, has every right to enter this town, and the sheriff has no right to force him to leave without due cause. All Rambo wanted was a meal and he would have gladly gone on his way. The sheriff overreacts in a completely unrealistic manner (Eric, if this is your idea of subtle I wonder what you consider overt).

But this is necessary to get quickly to the action which is the real point of the movie. Within the first 15 minutes Rambo goes berserk, kicks some serious police ass, and takes off into the woods on the lam. With the exception of the David Caruso character all of the police in this town are portrayed as sadistic ass-holes. They are completely one-dimensional stereotypes of the kind you normally see only in movies about Southern chain gangs.

To be fair though, the movie doesn’t excuse Rambo’s violent behavior either. He is shown as having more than one screw loose, even hallucinating that he is back in Nam several times. With his big dramatically-mumbled speech that Eric mentioned he does become more sympathetic. It is the only extended dialogue that Stallone has in the entire movie.

This got me to thinking how action movies are the closest things to silent movies being made today. Oh sure they have lots of sound effects but little talking compared to any other genre. In the 1980s Sylvester Stallone and Arnold Schwarzenegger would make entire movies where they uttered less than a page of dialogue.

Rambo: First Blood is a nearly perfect action movie. It has a memorable central character and the action starts quickly and almost never lets up. The violence is realistic without being over-the-top and it even has a socio/political message thrown in for free. As my brothers mentioned the lack of clear motivation for the sheriff is the one glaring flaw.