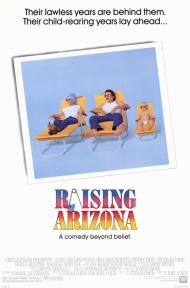 Raising Arizona is easily my favorite Coen brothers' movie. It's one of my favorite comedies from the 1980s that doesn't star a member of Monty Python. It's very silly and very funny.

Nicolas Cage plays H.I. (pronounced Hi), a small time criminal who specializes in robbing convenience stores. He's in and out of prison so much that he falls for Edwina (Ed), the incarcerating officer who takes his mug shot and fingerprints every time he gets caught. After his third or fourth trip to prison he proposes to Ed and they get married and try to raise a family, but unfortunately they aren't able to give birth naturally and can't adopt because of Hi's background. When Nathan Arizona, the owner of the Arizona's largest unpainted furniture store chain, and his wife give birth to Quintuplets, Ed and Hi decide to kidnap one. Matters are complicated when two of Hi's old prison buddies break out and hole up at their trailer. And matters are complicated even further when the kidnapping seems to stir up an evil from Hell in the form of the Lone Biker of the Apocalypse who comes out to track the baby down.

Like a lot of the Coen brothers' films the dialogue is highly stylized. The characters often have verbal styles that are unique to each of them and in this movie it is used for great comic effect. Hi in particular has a great and funny way of talking. "Well now, honey, we've been over this and over this. Now there's what's right and there's what's right, and never the t'wain shall meet." is one of his gems. Accents are also used liberally with Ed's being funny no matter what she says. You'll have her, "Turn to the right." stuck in your head after you hear her say it.

John Goodman and William Forsythe are both hilarious as the brothers who bust out of prison, or as they put it, "We released ourselves on our own recognizance." because "What Evelle here is trying to say is that we felt that the institution no longer had anything to offer us." They also get to say one of my favorite lines in the movie, "Hi, you're young and you got your health, what would you want with a job?"

Watching this movie also reminded me of how Nicolas Cage used to be an actor instead of a movie star. Nowadays he seem to confine himself to B-movies, but here he really buries himself in the part and does it well.

Quirky is a great word to describe this movie. It's just plain odd, but I mean that in the best possible way. It's also heart warming in a bizarre way as by the end you really do want everything to work out okay for Hi and Ed. Although the Coens also do drama and have Awards for them, I'll take a good comedy over their dramas any day. And this one comes with a complete ending, which is more than you can say for No Country for Old Men.

I first saw Raising Arizona with my wife, shortly after we first started dating. Her parents invited me over for dinner and put this movie on afterwards. I loved it then, and I loved it now, nearly 20 years later.

I am not sure if this movie could even get made today. After so many high profile abductions, kidnapping a baby is just too much of a sensitive subject to make light of these days. Thankfully this movie was filmed before political correctness completely oppressed Hollywood's creativity.

I am not a Nicolas Cage fan unless he is in a comedy, and this is easily his funniest work. The look on his face, and his hair that seems to grow in every direction at once, make him a very memorable character. Like Scott, I enjoyed his way of speaking, “Edwina's insides were a rocky place where my seed could find no purchase.” He says of their reproductive problems. When showing the baby their trailer, he says, “And this here's the TV. Two hours a day, either educational or football, so you don't ruin your appreciation of the finer things.”

I am one for always noting the politics in a movie, and Raising Arizona has a Liberal bias. One car clearly has a Mondale/Ferraro bumper sticker. One of Cage’s lines is, “I tried to stand up and fly straight, but it wasn't easy with that sumbitch Reagan in the White House. I dunno. They say he's a decent man, so maybe his advisors are confused.” It is hardly enough to ruin the movie, but still worth mentioning.

Too often I see a movie again after a long time and it no longer lives up to the memory. Raisng Arizona does, and remains to this day my favorite Coen brothers movie. 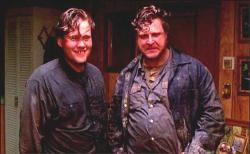 Unlike my brothers I disliked this movie when I first saw it years ago and I enjoyed it only slightly more this time around. Yes, it is quirky and features some funny shenanigans going on but overall I find it somewhat annoying.

The scene where H.I. kidnaps Nathan Jr. drags on. The different babies crawl all about the room while Cage stands around looking perplexed. I get that he isn’t the brightest bulb on the tree but his confusion seems like filler. The movie barely runs an hour and a half so maybe the Coen Brothers were padding it a bit here.

Another scene that annoys me is the car chase after H.I. robs the store for some diapers. I realize a comedy doesn’t have to follow the same rules as a drama but the actions of the police are so completely ridiculous that I find myself tuning out each time I watch it. They shoot at him in plain sight dozens of times but of course every shot just misses.

There are a few decent laughs. Holly Hunter’s reaction when she first holds Nathan Jr. cracks me up. “I just love him soooo much!” she repeats several times while getting intensely emotional. And later Evelle has a sweetly funny moment of bonding with the infant as well.

The character of Ed doesn’t ring true. She is a cop that plots a kidnapping. She’s tough and smart at times and seconds later a scatterbrained idiot. Then seemingly out of nowhere she suddenly feels remorse? But then writing for female characters has never been the Coen Brothers’ forte.

The ending tugs at the heart strings but seems almost tacked on, as if they wanted to find a way to have a happy ending without completely losing their status as Hollywood outsiders.