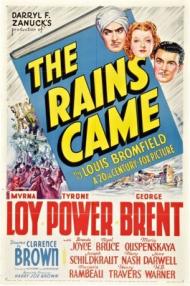 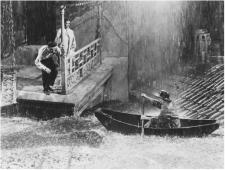 George Brent, Myrna Loy and Brenda Joyce get rained on.

In 1939 the Motion Picture Academy added the category of Best Special Effects to the Oscars. The Rains Came won, beating out both Gone With The Wind and The Wizard of Oz, and deservedly so. The earthquake sequence holds up incredibly well and is probably the best special effect produced in Hollywood before De Mille parted the Red Sea seventeen years later in The Ten Commandments. Twentieth Century-Fox built a huge set on its back lot that included a giant water tank so that when the earthquake causes a damn to break open they could actually flood the set.

Set in India and based on a best selling novel, The Rains Came stars Tyrone Power and Myrna Loy. He is a Hindu doctor and she is a beautiful woman with a past. She is married to a wealthy and much older British gentleman when they meet but she is instantly attracted to the doctor. Her husband is a stiff-upper-lip Brit that treats his manservant like shit (this leads to a memorable moment during the quake). The reliable but rather boring George Brent is around as a man that Myrna knew before. He knows the gold digging floozy she really is. There is also a young ingénue to provide an innocent contrast to Myrna’s character.

All of these people attend a ball at the palace of the local Maharajah and his wife. At just about the halfway point in the movie all hell breaks loose. First comes the earthquake and then the flood from the damn. This sequence lasts maybe 5 minutes but it is reason enough to see the film.

The ending is predictable melodrama with Myrna Loy becoming noble and sacrificing herself for Tyrone Power's sake. It is worth noting that this was one of the few times Loy got to play the Bad Girl. Although she had begun her career playing exotic vamps in silent movies she didn’t hit the big time until she became everyone’s idea of the perfect sophisticated wife opposite William Powell. At M-G-M Louis B. Mayer would never have cast her as Lady Edwina. That’s why she jumped at the chance to be loaned out to Century-Fox.

The Rains Came is not a great movie from beginning to end but it does feature two wonderful stars, a well stocked supporting cast and one hell of an action sequence. 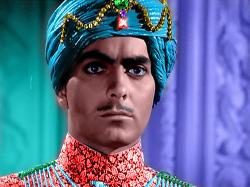 Tyrone Power in The Rains Came

The Rains Came is a lot of melodramatic nonsense.  The famous cast flirts almost continuously with each other the entire film.  I am a big fan of both Tyrone Power and Myrna Loy.  Power is charming but miscast as a turban wearing Hindu Indian.   Loy fairs better.

Perhaps due to her often playing opposite a drinking William Powell, I liked her scenes with George Brent better than with Tyrone Power.   In one scene she says to Brent, "Some night you're going to fall flat on your face and people will begin to suspect you drink."   In another scene she asks him, "You sober enough to take me to the party?"  Brent takes another drink and then says, "Almost."

In the first scene, Power and Brent talk about how they wish the rains would come.  They should have been careful for what they wished for.  As Patrick wrote, the special effects are very good.  It actually looks as if people were hurt making this film when the water rushes through the town.

Although the dam bursting is a scene worth seeing, The Rains Came suffers from too much swooning. The young blonde pines hopelessly for Brent.  Loy desperately wants Power.  They flirt innocently at the hospital when she acts as his nurse.  However, the only real chemistry is between Loy and Brent but they are just playing friends.

It was a bit fascinating seeing Myrna Loy and Tyrone Power playing roles they are not normally associated with, but as a team they did not make many sparks fly.   The melodramatic ending was likewise not as stirring as was intended. 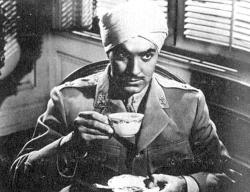 Tyrone Power as the least convincing Indian of all time in The Rains Came.

Power and Loy might be remembered as bigger stars today, but Brent does the best job here. Perhaps Loy enjoyed the opportunity to play against type, but I can't say that she makes a very successful femme fatale, at least not with Power. As you said Eric, she shares a greater chemistry with Brent than she ever does with Power. Power, meanwhile is as stiff and flat as a plank of wood and the idea that he is supposed to be Indian, is just embarrassing.  He was the first recipient of the "Harvard Lampoon" Worst Actor Award for his performance.  Brent, on the other hand, is quite charming as the disreputable expatriate. Unfortunately though, while he starts as the star, about halfway through, his character is shoved into the background as the story focuses on Power and Loy.

I agree with both of my brothers that the special effects are impressive. Although the flood and earthquake scenes only comprise about 10 minutes of screentime, almost half of the 100 shooting days were taken up with those segments and over 33,000,000 gallons of water were used. The scene where the water crashes through the wall, killing one of the characters is particularly well done. Eric's right, it really does make you wonder how they filmed it without harming the actors involved, but then that's the magic of the movies for you.

There is an awful lot of melodrama. It's poured on faster and deeper than the water and by the end the story is fairly drowning in it. The ending is supposed to be emotional and tearjerking, but honestly there's such a lack of spark between Loy and Power that I can honestly say that I didn't feel anything about the ending except relief that it was over.