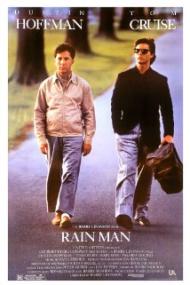 When Rain Man was first released in theaters, autism was a little discussed disability. This film even makes a joke about it when Charlie takes Raymond to a doctor and the nurse thinks he is there because he is “artistic.” Since this film, there has been a dramatic increase of reported cases of autism. There is debate over whether autism is increasing or it is just being better diagnosed. Either way, Rain Man brought autism out into the open.

Tom Cruise plays Charlie, a bitter son of a very wealthy deceased man whom he has not spoken to in years. Charlie becomes irate when he learns that he has been mostly cut out of his father's will. The bulk of it went to Raymond, who lives in an adult foster care facility. Charlie takes his girlfriend and goes there with lots of questions and plenty of attitude. He ends up taking Raymond with him in an effort to figure out how he can get the money from him.

Charlie has some business situations to deal with that are across the country. He attempts to get Raymond on a plane but Raymond somehow knows every crash that every airline has had and refuses to fly. What follows is a road trip that is sometimes dramatic and sometimes hilarious. This all leads to a unique bonding experience for them both.

Rain Man is full of great little lines, expertly delivered by Dustin Hoffman. After a single viewing you will be repeating such lines as, “Three minutes to Wapner.” Charlie’s and Raymond’s argument over his underwear is classic. My favorite dialogue exchange involves Charlie’s girlfriend Susanna, who shouts to Charlie, “You use me, you use Raymond, you use everybody.” Charlie comes back with, “Using Raymond? Hey Raymond, am I using you? Am I using you Raymond?” Raymond states, “Yeah.” Charlie snaps back with, “Shut up! He is answering a question from a half hour ago!”

Rain Man has plenty of entertainment and great performances to offer. However, since I first saw this film I have dealt with many children and adults who have been diagnosed with autism. Although Dustin Hoffman plays a very endearing character and won an Academy Award, I question the authenticity of his portrayal of an autistic person. Raymond is an autistic savant, meaning he is in some ways a genius, able to memorize an entire phone book and instantaneously count a pile of tooth picks fallen onto a floor. There are in fact savants who have such memory abilities but it is at best 10% of those afflicted with autism. This film makes it seem almost common. 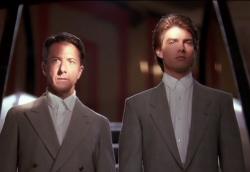 Autism and Asperger syndrome in particular have definitely become more commonly diagnosed since this film was released. Along with professional diagnoses, there are dozens of online tests that can test where users fall on the Autism scale. So many children have now been diagnosed with some level of Autism that a backlash has developed with many doctors now claiming that the problem has become over diagnosed and treated. In any case, as Eric wrote, Rain Man brought this condition to the public's attention in a big way upon its release. Also as he wrote, this film exaggerates the savant portion of Autism to a high degree. Hoffman's portrayal, while highly enjoyable, shouldn't be taken as a typical case of the disorder.

Although at the time of its release, it was Hoffman who received all the attention and the awards, it was Cruise who caught my attention this time. His is by far the less showy of the two roles, but is still quite good nonetheless. His Charlie starts off as an asshole and while he ends it just as cocky, you can see that the journey across the country with his brother has changed him. It's easy to forget that before he became a mega-movie star and Scientology poster boy, he was a serious actor. Although lately he seems to have abandoned attempts to be taken seriously, I have a feeling if he hangs in there long enough the Academy will reward him eventually for his career longevity.

It's the combination of Cruise and Hoffman that really make the film work. Sure, they don't actually look like brothers, but they definitely share a chemistry together that works very well. Cruise is as abrasive as Hoffman is endearing, but together they humanize each other's characters. If you change either actor then the film wouldn't work the same way.

This was also the film that first brought attention to prolific film composer Hans Zimmer. His score for this film would earn him the first of 8 Oscar nominations to date. The road music that accompanies Raymond and Charlie's journey, with its drums, electronic music and flute is definitely memorable as well as haunting. I hadn't seen this movie in at least 20 years and yet the instant I heard the first few notes it all came back to me.

The best films are those that manage to generate emotion in their audience without ever feeling phony or melodramatic. Rain Man does exactly that. True, Hoffman's portrayal may not be entirely accurate, but it will make you laugh while it touches you emotionally during the more dramatic scenes. Apart from some of the fashion choices this movie has held up very well in the 25 years since it was released. 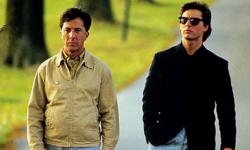 Eric, you might question the authenticity of the portrayal of him by Hoffman but Raymond Babbitt was based on a real person. Well actually two different men that screenwriter Barry Morrow met. One was Kim Peek who was called a "mega-savant" for his remarkable memorization skills. He could recall entire books verbatim, including the Bible and the Book of Mormon (he lived in Salt Lake City), and like Dustin Hoffman's character in the movie, he also knew entire phone books by heart. The other inspiration was Bill Sackter, a close personal friend of Morrows that was the subject of an earlier television movie called Bill, (a role that won an Emmy and a Golden Globe for Mickey Rooney in 1981). So although Rain Man may give the impression that autistic savants are fairly common, it was at least based on real people.

Like Scott, I was more impressed with Tom Cruise than Dustin Hoffman after watching this movie again for the first time in several years. Charlie travels a much bigger emotional arc. At the beginning of the story he's portrayed as an uncaring, moneygrubbing yuppie with daddy issues. By that final scene in the psychiatrist's office he has grown up and become a truly caring human being. And it happens in a believable manner. His feelings for his brother teach him to care about something other than himself. For the first time he learns to put another person's needs ahead of his own. Cruise is able to embody this maturity without losing a sense of the character or significantly altering his personality.

It also helps that the movie doesn't go all Hollywood at the end by having Charlie and Raymond drive off into the sunset together. Although the writers (Ronald Bass co-wrote the screenplay with Morrow) both reportedly wanted to go that route. It was only at Dustin Hoffman's insistence that Raymond winds up back at Wallbrook, the adult care facility.

Both men give wonderful individual performances but (as Scott wrote) it is really their combined chemistry that makes the film so damn compelling. Like the Abbott & Costello routine Raymond repeats incessantly, this movie is a two man show from beginning to end. Several memorable moments were improvised between the two of them. The farting in the phone booth scene is one. Reportedly Hoffman really passed gas and Cruise responded in character. And the big emotional climax where Raymond touches his forehead to his brothers (see photo in Eric's review) and says, “My main man Charlie.” was improvised by Hoffman.

Rain Man was the highest grossing movie of 1988 and it was the highest grossing Best Picture Oscar winner until Forrest Gump surpassed it in 1994. In addition to the Oscars for Picture and Lead Actor for Hoffman, it also earned Barry Levinson an Oscar for Best Director, and Best Original Screenplay for its two writers. Great performances stand the test of time and a quarter of a century later both Cruise's and Hoffman's acting as the Babbitt brothers holds up remarkably well.