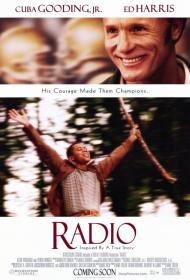 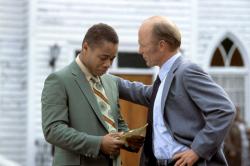 This year's Rainman award goes to Cuba Gooding Junior. It seems that Hollywood just can't stop making movies about the loveable, mentally challenged. Just once, I'd like to see a movie where someone with mental difficulties is evil or plays the villain. Ok, maybe that's too dark and twisted for mainstream Hollywood, but at least they could let a year go by without one of these films being made.

To be fair to Cuba, he does give a sincere and genuine performance as Radio, a mentally handicapped young man living in a small town in South Carolina in the 1970's, who is taken under the wing of the local high school football coach (played with more sincerity by Ed Harris). Radio is at the opposite end of the spectrum from Cuba's Oscar winning role in Jerry Maguire. It's just too bad the director, Michael Tollin, undercuts Gooding and Harris' performances by overloading the movie with sentimentality.

While I'm sure that the real Radio (the movie is 'inspired' by real events and a real person) had a difficult life and a genuinely inspiring one, I'm also quite sure that the dramatic events in his life were not accompanied by such god awful sappy music. At any moment in the story, no matter what is happening on screen, the music tends to swell too dramatically. Radio rides in his shopping cart down a street and the music swells. Radio is picked on by some members of the football team and the music swells. Radio eats a hamburger and the music swells. If the music had been toned down a bit more in places, the moments might have been dramatic; instead of melodramatic, but unfortunately for us, we're never given the opportunity to see if that's true.

My biggest fear when the movie began was that this was going to be yet another movie about one football team's struggle to win a season. You know, the team loses all year, but then, inspired by the sweet hearted Radio, goes on to be the champions. The story avoids that pitfall and instead simply focus's upon Coach Jones' (Harris) struggle to get Radio accepted into a small town southern community.

Buried amongst the schmaltz there are some funny moments, all courtesy of Gooding as Radio. The rest of the cast is all stiff and humorless, including Debra Winger as the Coach's wife, whose only job is to look sweet and support her husband.

By the end of the movie, when the real Radio is trotted out for the end credits, I felt as though I had overdosed on saccharine. The sap, the schmaltz, and the overdone sentimentality had done me in.

Radio gets some things right. The setting and time period are faithfully recreated without being too obvious. The acting is, for the most part, well done and the storyline doesn't seem to exaggerate the truth, but as Scott mentioned it is Schmaltzy with a capital S. And, as he wrote, the music, by James Horner, seems to underscore nearly every scene.

The movie is watchable for two reasons only: Ed Harris and Cuba Gooding Jr. These two talented actors bring enough subtle humanity to the stock characters they are playing that they rise above the clichéd plot - and lack of any real character development - and manage to lift the entire production with their finely nuanced craft.

But the bottom line here folks, is either you enjoy this type of go-for-the-heart-strings movie or you don't. It's that cut and dried. 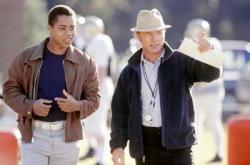 I know both Scott and Patrick have mentioned this but it is so obnoxious I have to reiterate. The score is so overblown it nearly turned my stomach. A scene early in the movie has Harris open the fence gate and let Radio into the hallowed ground of the football-training field. As he reaches for the gate, the music starts to rise. The closer Harris's hand gets to the gate the louder the tone. Just because he scored big with Titanic does not mean every scene of his movies has to have music.

Another big area I find fault with in this movie is the utter lack of anything racial. It takes place in the mid seventies in South Carolina. A rookie police officer arrests Radio by mistake but race is never mentioned as a motive. One of the parents dislikes Radio but if it is because of race it never says. I am not accusing anyone of being racist but it seemed as if the movie was quite purposely avoiding the subject at all costs.

This movie is more sugar coated than a glazed donut.