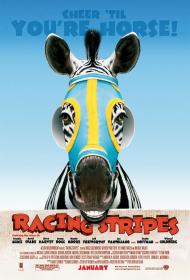 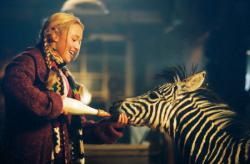 Perhaps aided by my extremely low expectations, I actually found Racing Stripes to be not such a bad movie. It's definitely aimed at young children, but there are enough jokes thrown at the adults and enough celebrity voiced animals so that I was never bored. And this despite the sickly sweet message of the plot and some gaping holes in the story.

The movie opens during a torrential thunderstorm where a traveling circus is fixing a flat tire on the truck carrying the zebras. When they reload the animals, they leave behind a zebra colt. The little animal is found by Nolan Walsh (Greenwood), who takes him back to his farm where he is promptly adopted by Nolan's daughter, Channing. I guess the circus never came back to look for their lost zebra and I guess Nolan believes in the finders-keepers rule of property since no mention is ever made about finding the zebra's rightful owners.

Once the little zebra, dubbed Stripes by Channing, gets settled in the barn, the movie's real stars make their appearance. The farm is populated by a menagerie of assorted animals voiced by a variety of Hollywood stars, led by Dustin Hoffman as Tucker, the wise-old Shetland pony, and Whoopi Goldberg as the wise-old goat. Jeff Foxworthy plays a countrified rooster, Joe Pantoliano does a very funny Pelican mobster from New Jersey who manages to quote just about every mob movie ever made, and the dog is played, appropriately enough, by Snoop Dogg, although his part is much smaller than the previews might lead you to believe, consisting of only four lines.

Stripes, unaware that he is a zebra and not a horse, grows up yearning to be a racehorse. Their farm is located next to a racecourse and Nolan used to train horses until (heartstring tugging alert) his wife was killed in a riding accident. With the help of Tucker, Stripes goes into training in the hopes that someday he will get to race.

Predictable and schmaltzy, Racing Stripes is cute and funny enough to keep the adults from being completely bored and should entertain the younger kids. 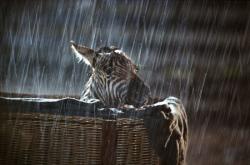 I was bored and my children were not entertained. Kids like a clear cut bad guy or villain. This movie has none. Stripes's big challenge is over coming adversity. Kids just love plots that have no action and teach moral lessons. NOT!

The moral lesson in Racing Stripes is ridiculous and annoying. A zebra is almost half the height of a horse but just as wide. They are not made for running like a horse or carrying a rider. This movie suggests that your physical makeup means nothing. All you need is the desire and you can accomplish whatever you want. That sounds so nice, but it is utter crap. No matter how hard I train I will never be an Olympic runner. No matter how hard a short person may practice, they will never be on an NBA team. What is wrong with someone who is different celebrating their difference instead of trying to be something they are not? Is that not a better moral to teach?

The movie doesn't stop there. Racing Stripes wants to shove it's messages down your throat at every turn. The animal rights message: The mean, rich (of course) lady next door demands that her trainer be ruthless with her horse in training him. The farmer and his daughter state clearly that they do not want Stripes to go to a zoo because they can't stand to see animals in a cage. The racial message: The flies bounce from a white stripe on Stripes back to a black one singing Ebony and Ivory.

Racing Stripes has very little to offer. The gangster bird had me chuckle a couple of times. Bruce Greenwood deserves credit for keeping a straight face when he talked to the zebra. Otherwise, I was completely bored and hope to soon forget I ever watched this heavy handed movie.