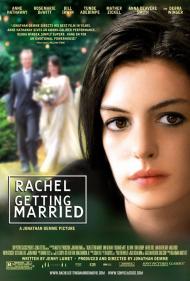 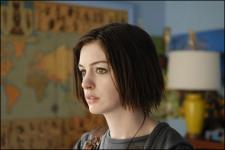 This is one wedding you should RSVP no to!

It's amazing how many movies nominated for an Oscar in 2008 there are that I really hated. You can add Rachel Getting Married to that list. Sure, Hathaway does a decent job and I won't begrudge her the nomination, but the movie itself is too long, too pretentious and is filled with characters I would dread to be trapped in an elevator with. One more time it becomes obvious that the Oscars have nothing to do with entertainment.

Hathaway plays Kym (she even spells her name pretentiously), a drug addict who gets out of rehab the week of her sister Rachel's wedding. Kym carries some serious baggage with her. When she was young and completely strung out on pills she was in a car accident that killed her younger brother. Rachel resents her because she always gets all the attention. And there are issues with her mother, who is divorced from their father, and a whole bunch of other depressing things going on in her life.

Nothing much happens in the movie. It's filmed with a hand held camera and it tries to give you a “you are there” kind of vibe. The problem with that is that they take the concept way too far. They should have chopped out at least 30 minutes of just the camera following people around, making toasts, playing some of the worst god awful music, and dancing at the wedding. I could literally feel time slipping away that I would never get back as I watched scene after pointless scene. At one point I had to ask myself, am I really watching a scene with someone loading the dishwasher? And did I really pay $12 per ticket for the privilege?

Kym's family is so awful and pretentious that at times they are unintentionally laughable. I'm really supposed to take seriously a couple who sing a Neil Young song to each other at the altar? And the audience at the wedding all seem genuinely touched by this. I mean, c'mon, who the hell wouldn't be laughing or groaning with embarrassment if it happened at a real wedding? Oh and did I mention that the bridal party is dressed in traditional Indian clothes (of the Asian kind, not the American variety)? And no, no one in the movie is actually Indian. Perhaps this was a ploy by Sony Pictures because they heard movies with Indian elements in them were going to win awards this year.

Watching this movie I kept thinking I was watching some film student's movie. I find it hard to believe that it was directed by an established film maker like Jonathan Demme, but apparently it was.

This is definitely one wedding to which you should RSVP no! 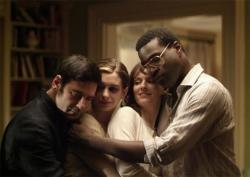 Jonathan Demme was certainly pretentious in the fact that he assumed his characters were so interesting that we (the audience) would be entertained simply by being another guest staying over the weekend and attending Rachel’s wedding. The dishwasher loading scene is a great example. It does achieve a certain level of realism but in this day and age of reality shows this faux documentary style of filmmaking seems old-fashioned and yes, pretentious.

The characters themselves I had less trouble with and the acting is quite good. Unlike you Scott I enjoyed the music at the wedding reception. And I think it is unfair to criticize their choice of a Neil Young song. After all most wedding vows are pretty cheesy. Of course the people in attendance would be moved since they love the couple being wed.

The characters, the spelling of a name, the music or choice of vows are not the problem here. The problem is that there isn’t a plot to speak of. Like I said we are simply weekend wedding guests that happen to be privy to the most private moments in the bride’s family. There is no character development and absolutely nothing gets resolved.

The biggest dramatic moment occurs between Kym and her mother when Kym confronts her mother (a wasted Debra Winger) about why she let Kym babysit her little brother when the mother knew she was strung out on drugs. The character of Kym is so, so sad. And Hathaway is compelling in the part. My heart did bleed for her a bit. But couldn’t she have found a way to forgive herself so that there would have been a point to the movie? 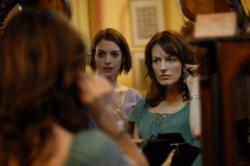 Anne Hathaway and Rosemarie Dewitt reflect in Rachel Getting Married

Kym physically survived a car accident that took her brother’s life. She has however, not recovered emotionally. As such, she cannot get past that moment and is in a constant state of self-loathing. She wallows in pity and constantly brings up her past before anyone else can. “I am Shiva the destroyer, your harbinger of doom this evening.” She begins when starting a toast to her sister and the groom.

She is an extremely depressing character to spend 113 minutes with. She mopes around. She complains. She has casual sex with the best man. She cries. She dwells on the past. “Yes, I was stoned out of my mind. Who do I have to be now? I mean, I could be Mother Teresa and it wouldn't make a difference, what I did. Did I sacrifice every bit of... love I'm allowed for this life because I killed our little brother?” At least being Mother Teresa would be helpful to someone.

Patrick felt a bit sorry for Kym and he mentioned the scene where Kym blames her mother for letting her babysit her little brother. It is the film's best moment but it is merely Kym trying to displace the blame. The quickest path away from any addiction or bad habit is to start by admitting your own culpability and then wanting to move on. Pointing the finger may feel good at the moment but it stalls your progress. Part of Kym’s soliloquy contains the lines, “And I struggle with God so much, because I can't forgive myself. And I don't really want to right now. I can live with it, but I can't forgive myself.”

As far as the songs, dancing and dialogue free scenes go, I agree with Scott. All of those things belong in the back ground. I get that Demme was really trying to create some authentic ambience but those scenes should have had some pertinent dialogue or action going on while the songs, dances and dish washing went on in the background.

I enjoyed Anne Hathaway’s performance but Kym is in far too dark of a place for me to want to go. I cannot imagine how difficult it would be to mingle with your family after being responsible for a death of a family member. Kym knows she needs to heal, but watching her deal with it is on no level entertaining.