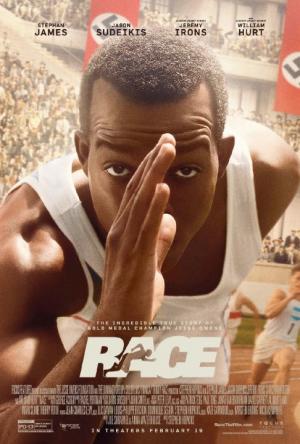 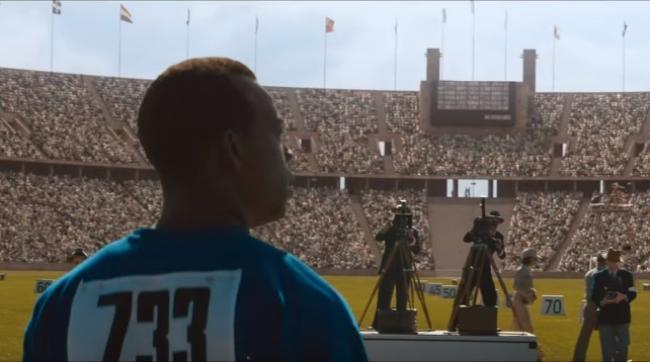 Race tells of two years in the life of Olympic runner Jesse Owens. It begins with him bidding goodbye to his family, girlfriend and daughter before getting on a bus and heading to Ohio State University where he will run track. He quickly becomes the star athlete and fame threatens to destroy this young man from a very modest back ground. His name starts appearing in print and his image is second only to Joe Lewis when it comes to famous black men of his time. With fame comes benefits and a curvaceous one catches his eye. this is straight out of Blood and Sand where the small town boy leaves his lady love for fame and attracts the vamp. Instead of him being killed in the bull ring, Jesse returns to his baby mama with his tail between his legs and a big fat apology. They would later marry and have another two daughters.

Owen's track coach, Larry Snyder, was an Olympic hopeful but never made it. He sees in Jesse a real talent that will make it all the way to the medal podium. They develop a friendship. Larry is Jesse's professional guiding light and Jesse is Larry's way of reliving a lost moment. It is their relationship that is the heart of the film and where everything else should have taken its cue.

If only the story could have stayed on them. There are side plots that slow the movie down. One is of American Olympic and government officials debating whether or not to boycott the Berlin games because of the Nazis. The NAACP is shown asking Jesse not to attend in defiance. Then we have scenes of Jesse agonizing over whether or not to go. As this is well known history, we know that Jesse went to the games so the boycott issues should have simply been mentioned in passing. There was no need for the several scenes of debates.

The one side plot that actually works is showing how Adolph Hitler and Joseph Goebbels saw the Olympics as a huge PR possibility and took every advantage of it. They put an end to all Jewish persecution in Berlin for the two weeks of the games. All anti-Semitic signs and propaganda were removed from public areas. Hitler had just come to power a couple of years prior and he wanted to show the world what a great job he had done and how glorious Berlin looked. Joseph Goebbels hired Leni Riefenstahl to film the Olympic games and in doing so helped to create the modern Olympics as we know them. This was the first Olympics with an opening ceremony and it was here that the tradition of the torch being carried into the sports arena by a runner began. A few clips are shown from Riefenstahl's finished film including the provocative clip of the Aryan looking German runner carrying the torch up the stairs of the arena, standing at attention, lifting the torch, pausing and then igniting the cauldron. It is truly a powerful symbolic gesture.

The theme of this film is, of course, bigotry. The movie is called Race for more than one reason. Owens is on the Olympic team of a country that makes him sit at the back of the bus and use servants entrances. He is competing against, and in, a country where Jews are losing rights, freedom and their lives. There is the real story and lesson of this film. When on the ship to Europe, all of the American athletes are birthed in first class, regardless of skin tone. In the Olympic village, all stay in the same dorms. Jesse had never experienced such equality before. A German long jumper helped him during the long jump. Two American relay runners get cut from their only event and were replaced by Jesse and another African American. The excuse given is that they are faster runners, which no one would debate but those two runners, Marty Glickman and Sam Stoller, were the only Jewish runners on the team. The film explains that it was back door dealings with Goebbels that caused this switch but I doubt anyone knows for sure.

As for the legendary snubbing Adolph Hitler supposedly gave Owens, this movie explains it by stating Hitler was inconveniently absent at the time. It is played as a dramatic moment but in real life it was less so. On the first day of events, Hitler greeted some of the winners but was informed by officials that as host country he had to greet all winners or none. He opted for none and did not even attend the next days events where Owens won his first gold medal.

If you want to know where the real snub came from, take it from the mouth of Jesse Owens himself who told Jeremy Schaap for his book "Triumph" about the 1936 Olympic games, "Hitler didn't snub me; it was our president who snubbed me. The president didn't even send me a telegram." That's right folks, Democrat President Franklin Delano Roosevelt invited members of the Olympic team to the White House upon their return but not the one who won the most gold medals.

Jesse may have been a hot political topic but the people loved him. During the games, Owens won over the mostly German crowd that rooted for him and chanted his name. New York gave him a ticker tape parade that turned out thousands to cheer him. In 1955 Republican president, Dwight D. Eisenhower, honored Owens by naming him Ambassador of Sports. In Berlin there is a middle school named after him and in 1984 his widow and daughters attended a ceremony in Berlin where the street in front of the stadium he ran in was renamed Jesse-Owens-Allee.

Race inspired me to look up these events but as entertainment it slogs through too many details on the wrong subjects to ever create the kind of emotional reaction it should have.