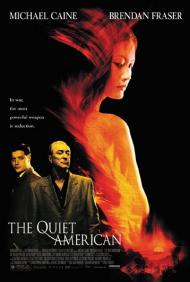 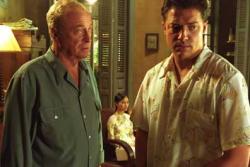 Michael Caine and Brendan Fraser in The Quiet American.

Do you know someone, or are you one of those people who think America is to blame for most of the world's woes since the beginning of the 20th century? You know, the blame America first crowd. The Quiet American is a blame America history lesson.

Michael Caine plays a lazy British journalist in early 1950's Vietnam. He is married to someone in England but has a Vietnamese mistress. His newspaper threatens to send him home, but he stalls them by claiming to be on a big story. He meets American Brendan Fraser who at first is just an ideological nerd but turns out to be so much more. Brendan also falls in love with Caine's mistress. The love triangle is moot, since the film's motive is entirely political.

The movie opens with Fraser's corpse floating in a river. The rest of the movie is then told in flashback. It is hardly a new plot device. The great Billy Wilder did it more than 50 years ago in Sunset Blvd. The movie's lack of originality does not stop there. Caine is the all-knowing expatriate. Fraser is the arrogant; know what's best for the world American.

This movie is a history lesson in the build up to the Vietnam War. The end of the movie is a series of headlines that go into the 60's. Each headline discusses America's build up and involvement in Vietnam. I do not dispute the massacres and the American involvement in the events of this movie. I take offense to the fact that this movie is so utterly agenda based that it hardly makes for an honest look at what was actually happening.

According to this movie, the Vietnam War is a direct result of CIA involvement. It is not even handled as an 'oops we screwed up'. It treats the CIA as cold, calculating, uncaring and devious. America was there for good intentions. This movie has Americans there simply to use people. Sure, American foreign policy is not always perfect, but to simply portray us as the bad guys is just one sided bias and hardly fair. Like Michael Moore, the makers of this film do not disclose truths; they just disclose their opinion of it. 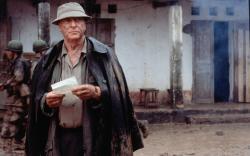 Michael Caine in The Quiet American.

While Eric is correct that the Americans are portrayed as the bad guys, if The Quiet American is viewed on its own, without seeing it as a part of a larger Liberal Hollywood conspiracy, this makes perfect sense in the context of the story. I'm certainly not expert enough on the history of the buildup to the Vietnam War to comment upon the accuracy of this portrayal.

And it isn't just the Americans who come off badly. The British, in the form of Michael Caine's reporter, don't come off looking like saints. His morals are hardly above reproach as he lies to keep his mistress and his position. Surprisingly, the French, who colonized Vietnam, have little to do with the story, beyond the detective who investigates Fraser's murder.

Where I categorically disagree with Eric is when he says that the love triangle is moot. On the contrary, it is the very heart of the story. Without giving away too much of the plot, it is Caine's jealousy that directly leads to the film's climax and not the politics. The politics are merely the excuse he uses.

Whether or not you agree with the politics, this is undisputedly a great performance by Caine. He fully deserved the Oscar nomination he received.

Tzi Ma and Michael Caine in The Quiet American.

The Quiet American is from the 1955 novel by Graham Greene that was based on his years spent working as a war correspondent in Vietnam in the early 1950s. The novel proved very popular in England but was condemned as being anti-American when it was published in the United States the following year. Two years later it was made into a movie by Joseph L. Mankiewicz, with Audie Murphy and Michael Redgrave in the roles played here by Brendan Fraser and Michael Caine.

The 1958 version was praised for being the first feature film shot on location in Vietnam. The screenplay, however, was met with disdain by the author since it focused almost entirely on the love triangle and it changed the identity of the American from a covert CIA agent to an actual civilian aid worker; thus neutering its geo-political message.

This 2002 remake restored Greene's original ending while adding the newspaper headlines Eric mentioned detailing the United States military buildup in Vietnam in the early 60s. After the events of 9/11 the studio delayed the release of this movie for more than a year, fearing any backlash over its negative portrayal of the titular American at a time when the country was experiencing a renewed sense of patriotism.

There's no denying this movie paints a ruthless portrait of American foreign policy, but Scott is also correct that it portrays England - and by extension all of Europe - in a less than flattering light. America may be shown as ambitious and power-hungry but England, as represented by Greene's semi-autobiographical protagonist, is indolent and decadent, using the women of Vietnam as sexual playthings.

Michael Caine is perfectly cast. No other actor plays the callous cad better than he. Even while behaving completely selfishly he is able to project a sense of guilt and torment over his own actions. He lies to Phuong about getting a divorce from his English wife, and takes her completely for granted. That is until Alden Pyle shows up. Brendan Fraser is also quite good although once Pyle reveals his true colors Fraser overdoes the evildoer bit. I half expected him to twist his mustache like a silent movie villain.

I also agree with Scott that the real reason Thomas Fowler is willing to go through with his part in the assassination plot is because of his jealousy over Phuong and not because of any strong sense of moral outrage. It begs the question, how often in human history have major world-shaking events been influenced by a personal vendetta? Whatever your views on world politics, The Quiet American is a thought provoking, well-acted drama set against a explosive backdrop. Graham Greene would have approved.