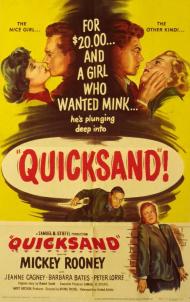 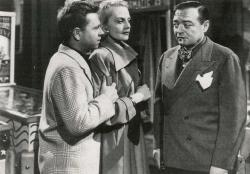 I have always enjoyed Mickey Rooney’s easy going, aw shucks, screen persona. He often played the all American boy next door who just wanted to date the girl down the street. If he ever got into trouble it was nothing his dad or putting on a show could not fix. In Quicksand, Rooney abandoned his good guy image and found himself way in over his head.

Rooney plays mechanic Dan Brady who has it bad for the new waitress, Vera, at the diner where he and his co-workers lunch. A friend owes Dan $20 but he cannot come up with the funds in time for Dan to take Vera out, so Dan takes the money from the Garage’s cash register with the idea of putting the money back as soon as his friend pays up. This is merely the beginning of Dan’s problems as his life spins out of control. His effort to put the money back causes another problem, which only leads to another problem. His crimes get bigger and bigger as he tries to make up for the previous one. In short, Dan is in some serious metaphorical quicksand. As he puts it, “I feel like I'm being shoved into a corner, and if I don't get out soon, it'll be too late. Maybe it's too late already!”

Dan has a brunette girlfriend named Helen. She is dedicated to him to a fault. For some reason, when the film starts, he has her on the back burner. The blonde Vera is a sure thing. On their date she stands in front of a store window and tells him she would do, “…whatever it takes.” to get that fur coat. Although the movie plays out in two days’ time, it seems forever until Dan realizes, “I had the right girl all along and I didn't know it.”

I prefer Mickey Rooney in lighter films but he is quite good in a role that James Cagney may have played some 20 years earlier. Speaking of Cagney, his sister plays the conniving Vera. The way she is dressed and carries herself, Vera practically has “tramp” stamped on her forehead. After the police come for her, the landlady yells, “Serves you right, you hussy!” It is the film's only funny moment.

The only other big name in the film is Peter Lorre, playing (what else?) a bad guy. His Nick runs an arcade and is Vera’s former employer, although what he employed her to do is never specifically stated. His crimes shown range from blackmailing Dan to trying to stiff a sailor out of a nickel. Lorre could play the sleaziest characters so easily.

This is Mickey Rooney as I have never seen him before and he pulls it off. This entire morality tale is played straight. Rooney commits serious crimes and even gets shot at by the police of all things. Save for a brief early scene, we rarely even see Rooney smile. Quicksand gets far too dark far too quick and wimps out at the end. The moral of the film boils down to just how much trouble trying to get laid can lead to.