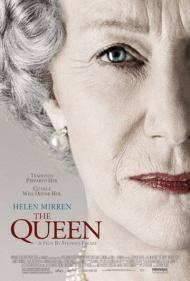 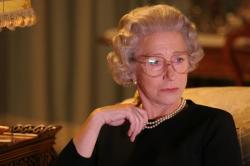 Helen Mirren in The Queen.

When I was a kid an old priest at my church told this story. A woman who had been married for many years complained to her husband that they weren't as affectionate to each other as they once were. She said, "Remember when we were first married, whenever you drove anywhere you used to put your arm around me and we would snuggle. We don't do that anymore. Now I sit on my side and you sit on yours." To which her husband replied after a little thought, "I never moved." The priest was making a point about god, but his analogy is very well suited for this movie and Queen Elizabeth's relationship with her people.

Helen Mirren stars as Queen Elizabeth II, and plays her to perfection and an almost certain Oscar nomination. As the movie opens she welcomes newly elected Prime Minister Tony Blair to Buckingham Palace for the traditional meeting where she will ask him to lead her government. Before the meeting she is prepped by one of her advisors who is scandalized by reports that Blair actually encourages his staff to refer to him as Tony, and that his wife has connections to an anti-monarchy movement. Blair, who ran on a platform of modernization, seems the antithesis to the tradition and protocol loving Queen. At this meeting she makes it a point to remind him that he is her tenth Prime Minister and that her first was none other than Winston Churchill who showed up for their meeting in a top hat and tails.

Just a few weeks later Tony's and the Queen's relationship is put through its first test when the former HRH Diana is killed in Paris. The Queen and other members of the Royal Family react with restraint according to custom. The Queen wants to follow exact protocols that have been in place for hundreds of years. Tony, on the other hand, sensing the mood of the people, reaches out with an impassioned speech in which he famously referred to Diana as the People's Princess. To the British public and fans of Diana's around the world, Tony's response is seen as the correct one, while the Queen and family is seen as cold and uncaring. The main plot of the movie covers the week following Diana's death, culminating with the Queen finally, and reluctantly coming down to London from her summer home in Scotland, to make her public statement about the princesses' death.

The story of that week is told with biting wit and most of the jokes are aimed at the fussy stuffiness of the Royal Family. And while at first it seems mean spirited as if mocking the Royals, the story is not one sided. While at first it is easy to just say, oh the royals got it all wrong, as the movie progresses you see that they are simply behaving in a way that tradition has dictated they behave. As the Queen tells Blair at one point, “I am behaving with good manners and quiet restraint. Two attributes that the world has long admired us for.” As Prince Phillip puts it, “The people knew one Diana and we knew another and the two bore no resemblance to each other.” By the movie's end, you can not help but have respect, even if you feel that she's outdated and anachronistic, for the Queen. Of all the Royals, it is Charles who comes off looking the worst. He is portrayed as weak, desperate for the public's support and even worried that he might be shot in the aftermath of Diana's death.

Both Sheen as Blair and Mirren as the Queen deserve credit for their performances. Neither of them do impersonations so much as they simply embody their respective characters. They look just enough like their subjects, but it is the performances that bring them to life.

The reaction of the British people and others around the world came as a shock to the Royal family, but the thing is, the Royal family never changed. They were simply behaving in the way they'd always done. It was the world that changed and the Royals were unprepared for it. 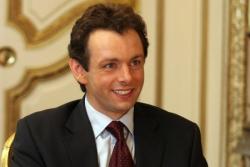 Michael Sheen as Tony Blair in The Queen.

I remember staying up late one summer night watching television when my show was interrupted by the news report that Diana was in a serious car accident in Paris. I watched with much of the world as the news of her death spread almost instantly. After the initial shock and questions of how it happened, I wondered what the Queen's reaction was going to be. It did not come that night. It did not come the next day on the news or the day after that. My thought at the time was, "I guess they really did hate her."

This movie plays like a true story. Whereas the Queen's movement, or lack their of, is historical fact, most of the conversations that happen in this movie are speculative so it cannot be considered as fact. My question, as I watched this film, was what was William's and Harry's role in any of this? I remember that it made news when they escorted The Queen and their father to look at the flowers at the gate. The movie has you believe that it was due to the Prime Minister's intervention. I get the feeling that the boys may have played some role in it. The only time they get any screen time is when they are shuffled off to go hunting with their grandad, as if it is some sort of therapy.

Mirren does her role proud but she has little to do other than look dour and otherwise sour. Her expression rarely changed the entire movie. She is given accolades for humanizing Elizabeth, but that credit is really due to the script as much as it is her performance.

The writing is well done and uses great symbolism in one important scene. Elizabeth is stuck in a river that is rushing by her. She sits on the side of the moving river, as it moves past her. She turns and sees a stag with huge antlers. She hears the hunters and shoos the stag away. The stag obviously represents herself. The antlers her crown.

The Queen even works as a comedy. Phillip skulks around as a grumpy old man complaining about everything from their own subjects to bothersome phone calls that cause their tea to get cold. Mirren may be getting all of the credit for this movie but it deserves to be spread amongst everyone involved in making it, including Diana, who is still being talked and written about some 10 years after her death. 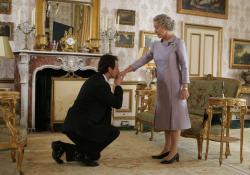 Michael Sheen and Helen Mirren in The Queen.

Helen Mirren is indeed wonderful in her Oscar winning role as Queen Elizabeth II. Eric, she may not change her facial expressions much but there is more to acting than that. She conveys a wide range of inner thoughts and feelings without doing so in a showy way. Many actors have said that subtle roles are more difficult to pull off than when you go big and histrionic in your mannerisms. Anyone who has seen news footage of the real Queen will see immediately that Mirren has her rather unique way of walking down pat. She almost stomps her feet while walking. In fact you could almost call it marching.

It is historically interesting to point out that the movie is set at a time when the fortunes of Tony Blair were on the rise, while the Queen was at her lowest point of popularity in the more than half a century of her reign. However, at the time of this movie's release in 2006 the monarchy had been fully restored to its place of honor while Mr. Blair's political career was on its way down. He would resign from office less than a year after The Queen premiered in theaters.

Eric mentioned the symbolism of the stag. I will take it even farther. Her Royal Majesty later learns the stag was shot by a guest on a neighboring estate. She goes to see the animal's dead body only to find that it has already been beheaded. Soon after this scene she decides to return to London to make her appearance outside Buckingham Palace and to make a televised statement about Lady Diana's death.

The filmmakers shot the scenes within the royal household on 35mm film thus imbuing them with a lush appearance. By contrast they shot the scenes in the outside world, such as in Tony Blair's office, on 16mm film. An artistic decision used to highlight the distance between royalty and commoners.

While it's true the actual dialogue spoken by the royals behind the scenes is only conjecture, it rings true. My favorite bit is advice given by the Queen Mum to her daughter. “You must show your strength. Reassert your authority. You sit on the most powerful throne in Europe, head of an unbroken line that goes back more than a thousand years. Do you think any of your predecessors would have dropped everything and gone up to London because a bunch of hysterics carrying candles needed help with their grief?”

The Queen is a well made look at an historically momentous week in British history.