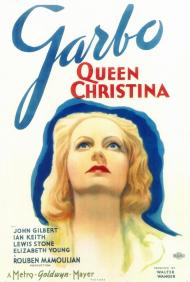 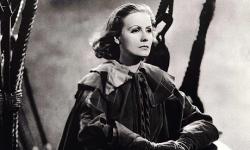 Queen Christina tells the story of the 17th Century Swedish royal and her ill-fated love affair with a Spanish courier. It is a romantic tragedy of the highest order, the kind only Garbo could make.

Wishing a respite from her constantly attended life, Queen Christina disguises herself as a young man and sets out to see some of her countryside. At a tavern she meets a courier named Antonio sent from the king of Spain. Unbeknownst to her, Antonio is carrying a proposal of marriage. Antonio (John Gilbert) takes an immediate liking to the "boy". In 1983 Barbra Streisand borrowed liberally from this scene in her movie Yentl. In both cases it is a stretch to believe that they are supposed to be boys, but you have to accept this fact to enjoy either film.

The Inn is booked solid so the 'boy' must room with Antonio. Forced with sharing a bed for the night, Christina reveals her true sex, but not her true identity. They fall instantly in love. The next morning Christina, realizing she cannot continue the charade, spends a few hopelessly romantic moments memorizing the details of the room. It is one of Garbo's most iconic scenes. She tells Antonio, "I have been memorizing this room. In the future, in my memory, I shall live a great deal in this room."

You can imagine Antonio's shock when he delivers his royal message to the Queen and discovers that she is the woman he fell in love with. From here the story moves quickly to its tragic conclusion. Antonio suffers mortal wounds in a duel and dies in his lover's arms aboard the ship they were planning on running away together in; Christina having abdicated her throne in order to be with her man.

The final shot of Christina on the prow of the ship staring into space is a miracle. Garbo never changes expression, hell she doesn't even blink. It is a truly stellar and incredibly moving moment in cinema.

Well, I think I've gushed enough for one review. All I can say is "SEE THIS FILM!"