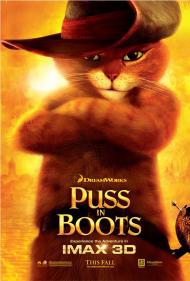 Antonio Banderas provides the voice of Puss in Boots.

At long last Puss in Boots, one of the funniest and best voiced characters from the Shrek franchise, gets his own movie. He's the Wolverine of Shrek's "X-men" and this is his origin story. While it's not as laugh out loud funny as the early Shrek movies, it makes up for it by throwing in more adventure.

We learn that Puss was raised in an orphanage in Spain. Humpty Dumpty was a fellow orphan with him and the two became best friends when they were young. Humpty was obsessed with the idea of magic beans that would lead him to the giant's castle where he could steal the golden goose. As they grew older Puss became a swashbuckling hero, while Humpty became a bad egg and a thief. When one day Humpty tricks Puss into helping him rob the bank, Puss is forced to hit the road, leaving Humpty to the guards.

Years later, Humpty tracks Puss down with the help of Kitty Soft Paws (Hayek). Humpty, while still bitter about being left by Puss, needs his help. He's located the magic beans and he wants Puss to help him steal them. Their adventure then pits them against a grown-up Jack and Jill, who haven't turned out as sweet as you'd might expect, and up the giant beanstalk, before finally climaxing back in Humpty and Puss's hometown.

Banderas has the perfect voice for this character. Who else could deliver lines like, "I am known by many names - The Ginger Hit Man, Chupacabra, Frisky Two Times." He's suave, playing the great lover, and threatening as a fighter, which is made all the funnier coming from a two foot tall cat. Once again he makes good use of his giant cat eyes to influence people and get his way. Some of his funniest moments are when he reverts back to being a "cat", like when he drinks his milk or chases the light dot around the street. His unwavering confidence, vanity, charm and innate sense of honor all wrapped up in a little cat make him a memorable movie character. He's so likable that the rest of the movie almost doesn't matter.

Lately I've been avoiding the 3-D version of films when I have a choice, but I opted for it with this one and it does enhance some of the action scenes. Puss and Kitty duel and chase each other, leaping and dancing out of the screen. The beanstalk is a large set piece in the middle of the film, which is also helped by the 3-D. Even in 2-D though, I'm sure it looks pretty good, but I do think it helped add to the sense of fun.

I always thought that Puss stole all his scenes in the Shrek movies and so was very glad to see him getting his own. Like Shrek, it's an animated film that grown-ups can enjoy as well as little kids at least based on the reaction of the children in the theater with me. Hopefully it will be the start of a new franchise or at least spawn a sequel. He is "Frisky Two Times" after all.

Puss in Boots and Humpty

Jack and Jill may not have turned out as sweet as you would expect, but they did turn out to be the most entertaining characters in the film, minus Puss.  Picture them as a couple of overweight hillbillys with a fondness for pigs.  At one point Jill holds Puss in Boots over an edge of a canyon and asks, "Is it true a cat always lands on its feet?" Puss in Boots anxiously corrects her, "No! That is just a rumor, spread by dogs!"   In another scene, Jack states, "I hate cats!"  to which Puss in Boots snaps back, "That's not what your mama said!" A cat in the back ground then says, "Oooooohhhhh!"  Which is a running joke throughout the film.

Unfortunately the good lines are sparse.   The Shrek films were filled with fairy tale creatures, where here they are scarce.  The town that Puss and Humpty grew up in is all human except for them.   Some additional use of fairy tale creatures would have allowed for more possibilities.

Scott compared Puss in Boots to Wolverine and I will add to that.  Hugh Jackman should have never been originally considered when casting for Wolverine, as he is a tall, thin Australian while Logan is a short, stout Canadian.  Yet Jackman made it work and made the role his.  The original Puss in Boots comes from a French fairy tale written by Charles Parrault, published in 1697.  It is about a sneaky cat who helps his owner get money, power and a princess to marry him.  Banderas's Puss in Boots is owned by no one and speaks with a distinctive Spanish accent.  However, Banderas is so good in the lead that it matters not that he is far removed from the source material.

Puss in Boots is a good time at the movies but not a great time.  The animation is lush and colorful.  Puss is as charming as he can be.   The problem lies in that he has no one to consistently bounce jokes off of.  Salma Hayek adds nothing to her role and in truth her character should have been scrapped all together and replaced with a comic sidekick.  We know Puss is a stud.  He does not need a romantic distraction.  He needs someone to engage him in witty conversation.  He needed a donkey to his Shrek. 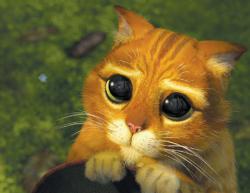 Although I saw this in 2-D the animation was still impressive. The various settings, from the rooftop chase at the beginning to the Western style race across the messa, are all vividly created. The beanstalk reaching into the clouds scene is a highlight and Puss's big sad kitty-eyes never fails to crack me up (see photo). I have to admit I rather enjoyed this movie.

I do agree with Eric that the story could have been improved by incorprating more fairytale supporting players. Besides the feline characters, we have Humpty Dumpty, Jack and Jill, and Jack and the Giant Beanstalk all thrown together in an odd but effective storyline. Eric mentioned the origin of the character of Puss in Boots, which was from a story first published in The Mother Goose Fairytales. The filmakers here include a giant version of Mother Goose as an homage to that original storybook compilation.

I enjoyed the character of Kitty Soft Paws. It didn't bother me that she brought a bit of romance to the suave Puss. On the contrary, I found it to be most appropriate. And she makes for a refreshingly bad-ass animated female figure. The character I disliked was Humpty. They tried to make him both the villain and the comic sidekick and he never really works as either. Although he did get a few funny lines, like when he says, “You know what they do to eggs in prison? I'll tell you this: it ain't over-easy!” This is followed by the running gag of the cat that says, “Ooooooohhhhhh!”

The dance fight between Puss and Kitty features some very amusing moves. “How dare you do the Litter Box at me!” And like all good cartoons, Puss in Boots includes a few funny lines tossed in for the adults in the audience. For example when the guard itemizes Puss's possessions before throwing him in jail he lists, “... one bottle of catnip.” To which Puss sheepishly explains, “It's for my glaucoma.” Another pop culture reference dates from the 1970s. When a woman describes Puss's titular boots as being made of “soft, Corinthian leather”, she is parodying Ricardo Montalban's description of car seats in an old commercial.

The three of us concur that Puss in Boots is a good time at the movies. Like Eric I think it could have been even better with the inclusion of a funny sidekick for Puss to bounce jokes off of, since neither Humpty nor Kitty successfully fills those shoes. Oh and before I forget, Antonio Banderas' voice work is indeed priceless.