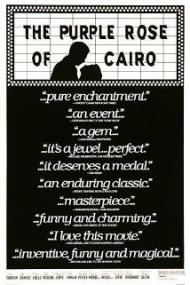 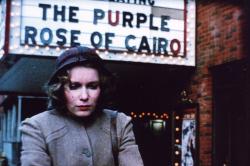 Mia Farrow in The Purple Rose of Cairo

The Purple Rose of Cairo is an imaginative stroll through classic Hollywood by way of a movie fan. Mia Farrow plays Cecilia, a 1930s New Jersey waitress whose only happiness is found in going to the movies. Her husband is a bum, who spends his time gambling her money. She talks movies with another waitress while the manager at the theater she frequents, knows her well. “ You're gonna like this one, it's better than last week's, more romantic.”

Feeling particularly depressed because of her husband and after losing her job, Cecilia watches one film, The Purple Rose of Cairo three times in one week. During her third viewing, a character named Tom Baxter suddenly looks directly at Cecilia and begins talking to her. He then walks off the screen and they walk off together and fall in love. The film stops on that scene as the rest of the film’s characters cannot finish without Tom. They as well talk to the audience and complain.

Hollywood is meanwhile in distress as they discover that other Tom Baxters are acting up on screen as well. Gil Shepherd, the actor who plays Tom Baxter, is likewise upset as having someone who looks exactly like him walking off with a married woman would be bad for his reputation. He flies to New Jersey to find his character and talk him back onto the screen.

The dialogue is full of some great lines. In the real world, Tom explains at one point, “Dad was a card. I never met him. He died before the movie began.” Cecilia says of Tom, “I just met a wonderful new man. He's fictional but you can't have everything.”

Cecilia and Tom get separated at one point. Cecilia ends up running into Gil Shepherd while Tom ends up in a brothel. One prostitute asks Tom, “Do you wanna tie me up?” A clueless Tom Baxter laughs and responds, “You're funny! She's funny! The absurd non-sequitur.”

Mia Farrow is good as the hopeless movie romantic, easily believing that a fantasy has come to life. In fact, everyone accepts it very easily. Jeff Daniels is likewise good in dual roles. Gil Shepherd is a typical narcissistic actor. He is always arguing that his character, Tom Baxter, may have fewer scenes than other characters but is just as important to the story. My favorite line is when he claims to know what Tom will do next because, “Well, he's my character. I created him.” Causing Cecilia to ask, “Didn't the man who wrote the movie do that?”

He sure did and that man is Woody Allen. I am not the fan of Allen that Patrick and Scott are but he does make some decent films. The Purple Rose of Cairo is reminiscent of my favorite Woody Allen film, Radio Days (1987). Both films are nostalgic and neither feature Allen on screen. A lengthy clip of Fred Astaire and Ginger Rogers dancing is shown. This is also one of Van Johnson's last feature films. Allen is most noted for his contemporary films but he clearly has a fondness for days of yore. 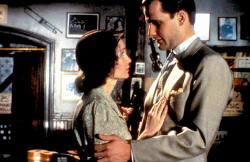 Mia Farrow and Jeff Daniels in The Purple Rose of Cairo.

Eric, I wonder if part of the reason you enjoyed this movie so much is because it doesn't feel like a traditional Allen film. He doesn't star and there isn't an actor playing a surrogate Woody. The lead character is actually a woman, something that is also rare in an Allen film. There are some similarities between this film and Radio Days. Both are a loving tribute by Allen to the entertainment of his childhood. Radio Days dealt with his nostalgia for the radio stars of yesteryear, while this one pays tribute to the movies he enjoyed as a youth. He even filmed the theater scenes at the Kent Theater in Brooklyn, his favorite movie theater as a child.

The idea behind the plot is a lovely one that is sure to be appreciated by any fan of the movies. For many of us, movies represent escapism. They're a chance to get away from the humdrum realities of our everyday lives. Those flickering images casting shadows on a screen while we sit entranced in the darkness, transport us to faraway places and exoctic lands where everyone is beautiful and things turn out all right in the end. Cecilia's ordinary life is drab and dull. She's in a loveless marriage with a man who abuses her, living in a rundown home during the depression with a thankless job that she can't even keep. Only in the movie theater does she find true happiness.

Another thing that keeps this from feeling like an Allen film is the tinge of sadness that permeates it from beginning to end. The time period is the Great Depression and it shows in every scene. The costumes, the sets and even the weather is grey and careworn. The only glamour to be found is up on the movie screen and when Hollywood blows into town to investigate Tom Baxter's defection. That isn't to say that there isn't humor because there is, but it's not a straightforward comedy, despite the presence of many funny lines, including the ones that Eric mentioned.

While Farrow is terrific in the lead, I wasn't so enamored with Daniels. He's fine in the part, but he lacks the true movie star charisma that the role of Gil Shepherd demands. He pulls it off, but without the panache needed to make it something truly special. It was actually Michael Keaton who was originally given the dual role of Shepherd and Tom Baxter and even filmed for 10 days in the parts, before Allen decided to recast, feeling that Keaton was too modern for the part.

The ending isn't an upbeat one. Reportedly the studio urged Allen to give it a more traditional happy ending, but he resisted any and all attempts to change it. The result is a melancholy film. It may not satisfy everyone, but Allen himself has consistently listed it as one of his personal favorites, saying, "It was the one which came closest to my original conception."

Jeff Daniels as Tom Baxter enters the real word in The Purple Rose of Cairo.

My favorite Woody Allen films tend to be the ones set in the past and/or the ones that feature a fantasy element. The Purple Rose of Cairo fits the bill in both of these regards. Its depression era setting is vividly recreated with the use of just a few outdoor locations. There is the street the movie theater is on, the alley where Monk shoots dice, and the amusement park where Cecilia takes Tom Baxter. The fact that the movie was shot in winter, with all the bare trees in the background, adds to the bleak atmosphere. The central conceit of a character breaking the fourth wall and entering the real world is one of the richly imaginative writer/director's most clever and fun.

Allen does a wonderful job of recreating 30s era movies. My favorite scene is the one where Cecilia accompanies Tom into the sophisticated art deco world of the black and white titular movie. The montage of them painting the town is spot on. As the names of different nightclubs flash across the screen, Tom and Cecilia are shown looking up in wonderment while carefully holding on to their hats to prevent their falling off. This is, of course, underscored by jazzy trumpets.

Mia Farrow plays drab and mousy better than most and she's perfectly cast as Cecilia, the rather clumsy waitress who pines for the glamorous life she sees in the movies. Danny Aiello is a walking cliché as her no good, abusive husband, always threatening to hit her if she doesn't behave. The always hilarious Dianne Wiest makes the most of her small role as a prostitute, in the one scene that lets you know you're watching a Woody Allen movie from the 1980s and not a vintage 1930s fantasy. And it's a nice touch that Allen thought to include Van Johnson as a character in the movie within the movie.

I'm of two minds about Jeff Daniels. I agree with both my brothers. I'm on Eric's side that he's good as Tom Baxter, helped out by the old fashioned movie makeup and pith helmet, which lend an air of adventure to his image. But, like Scott, I found him lacking in the necessary larger than life charisma needed to play Gil Shepard. He does a decent job at distinguishing between their personalities though, with the ambitious Gil contrasting nicely with the wide-eyed innocence of Tom. Together with Cecilia they form as unusual a movie love triangle as you are ever likely to see.

Woody Allen is clearly a huge fan of old movies and it shows in every frame of The Purple Rose of Cairo. He ends the story with Cecilia once again finding solace at the movies, watching Fred and Ginger do their thing, as we watch Cecilia settle in for the ride.